The famous call from Stockholm reaches scientists in very different cirumstances: Some take the call that will change their life in the middle of the night, like Bruce Beutler; others miss the call because they’re in an airplane, like Hiroshi Amano. Michael Kosterlitz, however, took the famous call from Adam Smith, chief scientific officer of Nobel Media, in an underground carpark outside Helsinki. His first reaction was – silence. Listening to the recording of this phone call, everybody thinks that maybe the reception underground is as bad as Kosterlitz predicted. Then: “Jesus. That’s incredible…. that’s amazing!”

Two weeks after this surprise call, Kosterlitz gave a lecture at Aalto University in Finland about his Nobel prize research. He’s currently teaching in Finland, usually he’s a professor at Brown University in Providence, Rhode Island. In his Helsinki lecture, Kosterlitz describes how he was working on complicated calculations in theoretical physics at the University of Turin in Italy when he applied for a postdoc position at the University of Birmingham. He got the post, but was ‘fed up’ with his calculations. “So I was wandering around the department asking if they had some tractable problem that I could work on,” he recalls. “I found myself in the office of David Thouless. And standing there listening to him going on about all sorts of weird and wonderful ideas like superfluidity, vortices, dislocations, crystals and so forth.”

Kosterlitz thinks today that his “approaching this from a standpoint of very strong ignorance” was actually an asset: His mind wasn’t filled with preconceived ideas about condensed matter: The ideas he’d written up together with David Thouless in 1973, for which they received this year’s Nobel Prize in Physics, were his very first project in this field. “It’s amazing that this was my first attempt at doing anything in condensed matter physics.” 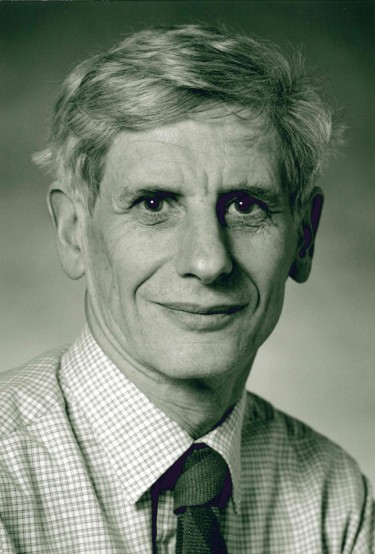 Michael Kosterlitz and David Thouless were honoured for their theoretical work on phase transition in a two-dimensional model. The two physicists, then at the University of Birmingham, were able to describe accurately through advanced mathematical calculations what happens on extremely thin surfaces at very low temperatures: quantum vortices change their spin, resulting in dramatically altered surface properties, like for instance superconductivity at extremely low temperatures. This is called a ‘phase transition’, and this particular one is now named Kosterlitz-Thouless transition.

Their findings involve two highly theoretical – and really difficult – fields: quantum mechanics and topology, a branch of advanced mathematics. And everybody writing about these findings outside a physics journal faces the same predicament: How to explain something that is so far removed from everyday experiences, as well as highly abstract?

Thors Hans Hansson, member of the Nobel Committee for Physics, faced the same problem when he announced and tried to explain this year’s Nobel prize (watch video posted below). He solved it by opening his packed lunch and showing the surprised audience three different baked goods: a cinnamon role, a bagel, and a Swedish pretzel with two holes. With the help of his lunch, he explained how in topology, it only matters if a structure has zero holes, or one hole or two holes, but it doesn’t matter whether this structure is a cup or a bagel, for instance. And the journalists present at the press conference in Stockholm on October 4th eagerly seized this analogy: If you google ‘pretzel’ and ‘Nobel’, you get 152,000 hits, many of them articles about this year’s Nobel Prize in Physics.

Duncan Haldane, the third recipient this year, wasn’t so lucky with his call from Stockholm: it reached him at 04:30 in the morning. And at 11:00 a.m. the same morning, he taught his scheduled graduate class at Princeton University. “Electromagnetism: Principles and Problem Solving”. He was honoured for his theoretical calculations of one-dimensional chains of small magnets, also called ‘spins’. He predicted that chains with integer and half-integer spins should be qualitatively very different, and this unexpected effect was later confirmed experimentally. This was the first example of a new type of material called ‘topological material’. Later, he moved on to two dimensions and more, and experimentalists are tackling these ‘materials’ as well. 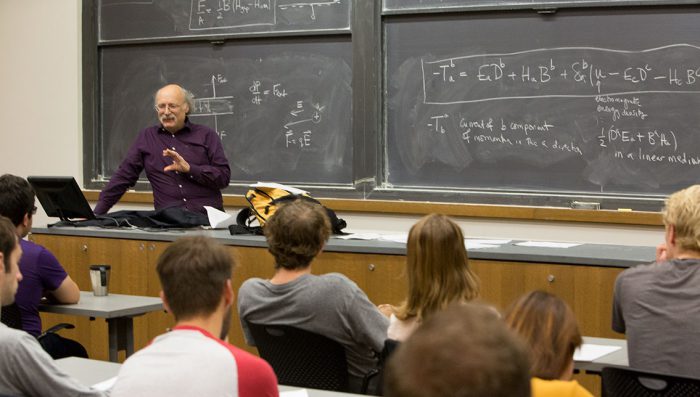 F. Duncan M. Haldane teaching a class on October 4th, 2016 – the day he learned that he was a Nobel Laureate. The three physicists were honoured “for theoretical discoveries of topological phase transitions and topological phases of matter”. Photo: Princeton University

Nowadays, one of the hottest topics in this field are ‘topological insulators’. Their interior is electrically non-conducting, but their surfaces behave like a superconductor, meaning an electric current can flow without meeting electric resistance. Today it seems feasible that some of these insulators can even function at room temperature. They’re considered to be vital to the construction of future quantum computers. Haldane himself calls these future computers “the holy grail” of his field.

All three Nobel Laureates were born in Britain and now work at US universities. Sir Martin Rees, a former professor of cosmology and Astronomer Royal since 1995, explains in the Guardian how university budgets were squeezed by the Thatcher government in the 1980s, causing many first-class researchers to flee the country. When asked about the ‘Thatcher brain drain’, Duncan Haldane immediately replied: “I didn’t have my brain drained!” Albeit having lived in the US for decades, Haldane has obviously retained his British sense of humour. He continues to explain how indeed the Thatcher administration was funding only topics they considered ‘useful’, but not ‘inspiration based topics’.

We’re looking forward to hopefully welcoming one or more of this year’s Nobel Laureates to the Lindau Nobel Laureate Meetings in the years – and meetings – to come.

Member of the Nobel committee for physics explains topology using a cinnamon bun, a bagel and a pretzel https://t.co/gORO04UYam

In topology, it only matters if a structure has no hole, or one hole, or two holes – that’s why Thors Hans Hansson described the methods of topology using baked goods from his lunch bag (watch video above). Image: iStock.com/NataliaHubbert