On 14 September 2015, the LIGO detectors in the USA saw space vibrate with gravitational waves for the very first time. Even though the signal was tiny – the time difference between the two light beams in one LIGO interferometer was only 0.0069 seconds, as Olga Botner from the Nobel Committee for Physics points out – it marked the beginning of a new era in astronomy: with Gravitational Wave Astronomy, researchers will be able study the most violent events in the universe, like the merging of black holes. Such a merger was detected in September 2015, and it happened incredible 1.3 billion lightyears away from earth.

The fourth observation of a gravitational wave was only announced on 27 September 2017 at the meeting of G7 science ministers in Turin, Italy. It was also the first to have been picked up by the Virgo detector, located near Pisa. This detection at a third site, besides the two LIGO detectors in the US states of Washington and Louisiana, provides a much better understanding of the three-dimensional pattern of the wave. It is also the result of two merging black holes and was detected on 14 August 2017.

Gravitational waves had been predicted in 1915 by Nobel Laureate Albert Einstein in his General Theory of Relativity. In his mathematical model, Einstein combined space and time in a continuum he called ’spacetime‘. This is where the expression ‘ripples in spacetime’ for gravitational waves comes from.

LIGO, the Laser Interferometer Gravitational Wave Observatory, is a collaborative project with over one thousand researchers from more than twenty countries. Together, they have realised a vision that is almost fifty years old. The 2017 Nobel Laureates all have been invaluable to the success of LIGO. Pioneers Rainer Weiss and Kip S. Thorne, together with Barry C. Barish, the scientist and leader who brought the project to completion, have ensured that more than four decades of effort led to gravitational waves finally being observed.

Already in the mid-1970s, both Kip Thorne and Rainer Weiss were firmly convinced that gravitational waves could be detected. Weiss had already analysed possible sources of background noise that would disturb their measurements. He had also designed a detector, a laser-based interferometer, which would overcome this noise. While Rainer Weiss was developing his detectors at MIT in Cambridge, outside Boston, Kip Thorne started working with Ronald Drever, who built his first prototypes in Glasgow, Scotland. Drever eventually moved to join Thorne at Caltech in Los Angeles. Together, Weiss, Thorne and Drever formed a trio that pioneered development for many years. Drever learned about the first discovery, but then passed away in March 2017.

Together, Weiss, Thorne and Drever developed a laser-based interferometer. The principle has long been known: an interferometer consists of two arms that form an L. At the corner and the ends of the L, massive mirrors are installed. A passing gravitational wave affects each interferometer’s arm differently – when one arm is compressed, the other is stretched. The laser beam that bounces between the mirrors can measure the change in the lengths of the arms. If nothing happens, the light beams cancel each other out when they meet at the corner of the L. However, if either of the interferometer’s arms changes length, the light travels different distances, so the light waves lose synchronisation and the resulting light’s intensity changes where the beams meet; the minimal time difference of the two beams can also be detected.

The idea was fairly simple, but the devil was in the details, so it took over forty years to realise. Large-scale instruments are required to measure microscopic changes of lengths less than an atom’s nucleus. The plan was to build two interferometers, each with four-kilometre-long arms along which the laser beam bounces many times, thus extending the path of the light and increasing the chance of detecting any tiny stretches in spacetime. It took years of developing the most sensitive instrument ever to be able to distinguish gravitational waves from all the background noise. This required sophisticated analysis and advanced theory, for which Kip Thorne was the expert. 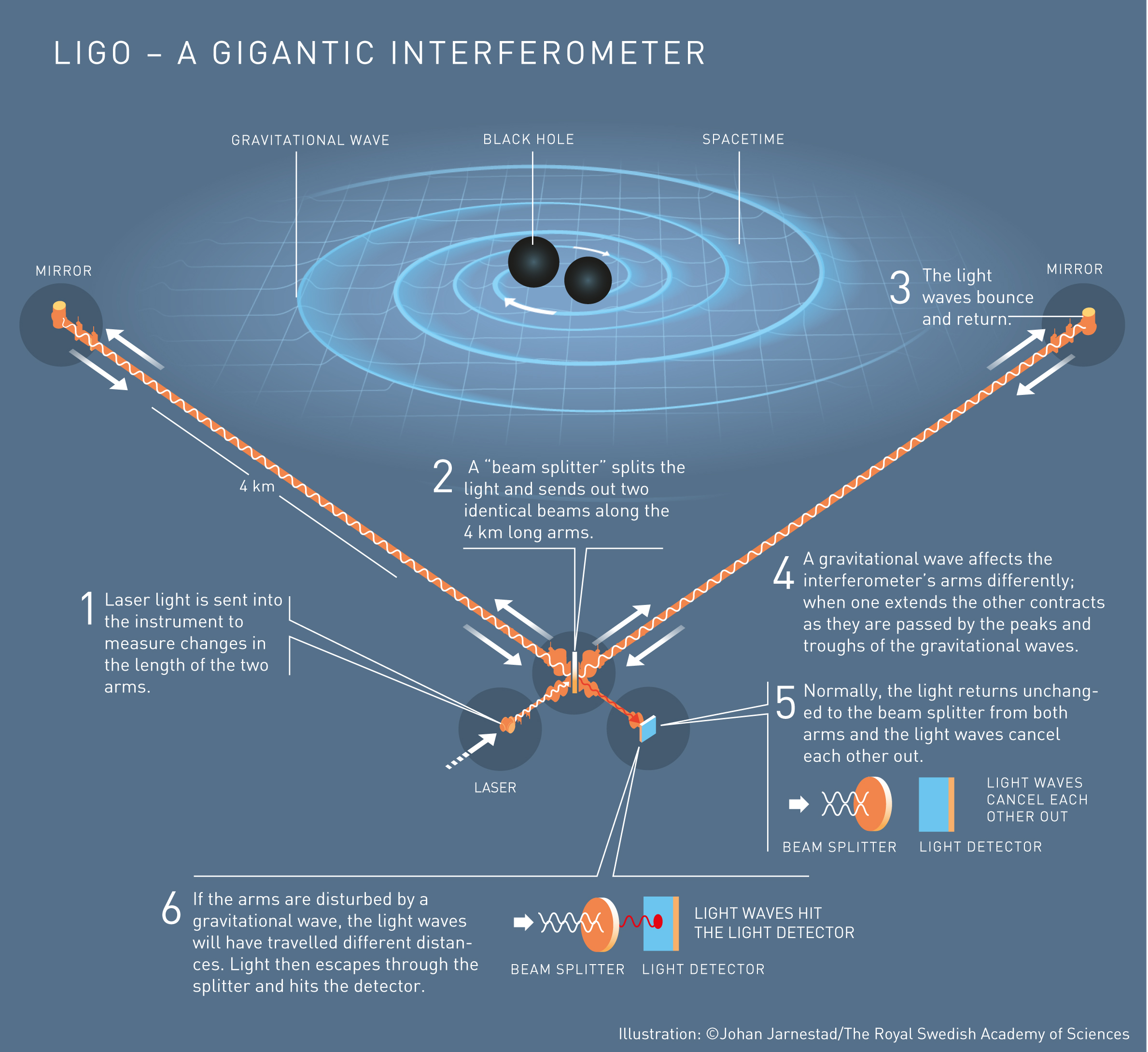 Running such a project on a small scale was no longer possible and a new approach was needed. In 1994, when Barry Barish took over as leader for LIGO, he transformed the small research group of about forty people into a large-scale international collaboration with more than a thousand participants. He searched for the necessary expertise and brought in numerous research groups from many countries.

In September 2015, LIGO was about to start up again after an upgrade that had lasted several years. Now equipped with tenfold more powerful lasers, mirrors weighing 40 kilos, highly advanced noise filtering, and one of the world’s largest vacuum systems, it captured a wave signal a few days before the experiment was set to officially start. The wave first passed the Livingston, Louisiana, facility and then, seven milliseconds later – moving at the speed of light – it appeared at Hanford, Washington, three thousand kilometres away.

Young researcher was first person the ’see‘ a gravitational wave

A message from the computerised system was sent early in the morning on 14 September 2015. Everyone in the US was sleeping, but in Hannover, Germany, it was 11:51 hours and Marco Drago, a young Italian physicist at the Max Planck Institute for Gravitational Physics, also named Albert Einstein Institute and part of the LIGO Collaboration, was getting ready for lunch. The curves he glimpsed looked exactly like those he had practiced recognising so many times. Could he really be the first person in the world to see gravitational waves? Or was it just a false alarm, one of the occasional blind tests about which only a few people knew?

The wave’s form was exactly as predicted, and it was not a test. Everything fit perfectly. The pioneers, now in their 80s, and their LIGO colleagues were finally able to hear the music of their dreams, like a bird chirping. The discovery was almost too good to be true, but it was not until February the following year that they were allowed to reveal the news to anyone, even their families.

What will we learn from the observation of gravitational waves? As Karsten Danzmann, Director of the Albert Einstein Institute and Drago’s boss, explained: „More than 99 percent of the universe are dark to direct observation.” And Rainer Weiss elaborated during a telephone conversation with Thors Hans Hansson of the Nobel Committee: Merging black holes probably send the strongest signal, but there are many other possible sources, like neutron stars orbiting each other, and supernovae explosions. Thus, Gravitational Waves Astronomy opens a new and surprising window to the Universe.