From Mice and Fruit Flies...
Back
Susanne Dambeck on the Research of immunologists Bruce Beutler and Jules Hoffman who are both at Lindau for the first time.   Ever since the discovery of the role of pathogens more than a hundred years ago, researchers asked: but how does the body identify pathogens in order to combat them? Bruce Beutler and Jules Hoffman both made important discoveries on the workings of the immune system. This year, both will attend the Lindau Nobel Laureate Meeting for the first time. On October 3rd in 2011 at 2:30 a.m., Bruce Beutler was lying wide awake in his apartment in San Diego. He was still on Hong Kong time, where he had received the Shaw Prize in Life Sciences. He also knew that the Laureates for the 2011 Nobel Prize in Physiology and Medicine would be announced that day – in Stockholm, nine time zones ahead of him. Bleary-eyed, he looked at his cell phone: there was one new email, with just two words in the subject line: Nobel Prize. Too excited to read more than the introductory congratulations, he ran downstairs and called a colleague: “Bets, I think I won the Nobel Prize!” Confirmation was difficult, there being too much traffic on the Nobelprize.org website. Once the good news was confirmed, Beutler called his his sons, his mother, and his closest friends and colleagues, rousing most of them from sleep 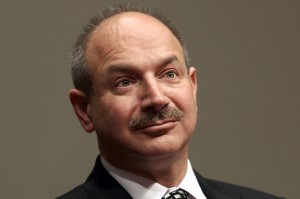 Beutler won the Nobel Prize for his breakthrough on the innate immune system, more precisely: on toll-like receptors. He discovered that one toll-like receptor, TLR4, was responsible for the identification of bacteria on a molecular level. Mice without functioning TLR4 were unable to beat bacterial infections. Beutler is a doctor by training, but always was a scientist at heart. Already as a teenager, he had worked in his father’s lab: Ernest Beutler was a renowned pioneer in modern hematology. His parents had fled with him from Germany in 1935. Young Bruce was just as gifted as his father: He finished high school at age 16 and graduated from college at 18. He went to medical school at the University of Chicago, just like his father – but the pull of the lab was stronger. 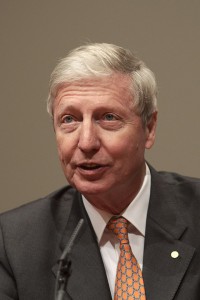 Jules A. Hoffmann won the 2011 Nobel Prize in Physiology and Medicine, together with Bruce Beutler (c) Holger Motzkau

Jules Hoffmann was awarded the Nobel Prize together with Beutler: he had described the role of the toll-gene for the innate immune system of fruit flies. The third recipient, Ralph M. Steinman, who had coined the term “dendritic cells” in the 1970s, died three days before the prize was announced of pancreatic cancer. Since the Nobel Committee hadn’t been aware of his death, he is still considered a Nobel Laureate; normally, the prize is not awarded posthumously. Hoffmann is a Luxembourg-born French biologist who has spent his career working with the model organism drosophila melanogaster, or fruit fly. He had studied and worked in Strasbourg, and now is the research director of the National Center of Scientific Research (CNRS) there. 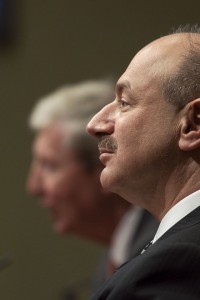 Bruce Beutler, with Jules Hoffmann in the background, at the Nobel Prize press conference in 2011 (c) Holger Motzkau

Today, toll-genes and toll-like receptors are known to exist in mammals, insects and even plants. In fruit flies, they play a crucial role in embryonic development, as well as in the immune system. Ten human TLRs are known, mice have three additional TLRs. With their presence in the dendritic cells, they are also considered to form an important link between the innate and the adaptive immune system. Many drug development efforts have targeted these receptors and have for instance developed treatment strategies against autoimmune diseases like rheumatoid arthritis. Labs around the world are working on novel strategies to modulate the immune responses to bacterial or viral infections. Bruce Beutler, as well as Jules Hoffmann will give lectures at the present Lindau Nobel Laureate Meeting. Videos of these lectures will be posted soon.