The Best is yet to...
Back
Eric Betzig and his friend Harald Hess have invented a whole new research branch: living room physics. Both met years earlier at Bell Laboratories, and they developed their ideas about super-resolution microscopy while hiking in several National Parks. Hess had been able to take his equipment from Bell with him, so they set up their first super-resolution microscope according to their ideas in Hess’ living room – what would become the first PALM microscope. Next they wrote a patent, then their Science paper on PALM was published in 2006, and this invention won Betzig the 2014 Nobel Prize in Chemistry, together with William E. Moerner and Stefan Hell. for “the development of super-resolved fluorescence microscopy.”

Betzig left Bell because he had become frustrated with the limitations of near-field microscopy. In today’s lecture at the 65th Lindau Nobel Laureate Meetings, he explained that, “every technology is like a newborn baby – when it is born, you think it might become president or cure cancer. But in the end, you’re perfectly happy when it just stays out of jail.” But after working in his father’s machine tool company in Michigan for seven years, he realised that he was “a terrible businessman” and looked for ways to revert to science, convincing Hess to leave his job and work on their invention. They called their “baby” photoactivated localization microscopy, or PALM. The breakthrough for their approach was the advent of photoactivatable proteins, proteins that could be turned on and off with a specific light wavelength. In their novel approach, Betzig and Hess would turn this light on only briefly, exciting a few molecules, which could be localized this way, even their centers could be plotted. As these molecules bleached out, the researchers turned the light on again to see the next batch, and so forth. Finally, the entire probe had been activated, seen and plotted – the result is a graphic resolution on a nano scale, far beyond the diffraction limit, i.e. the natural limit of light microscopy due to the wavelength of visible light. 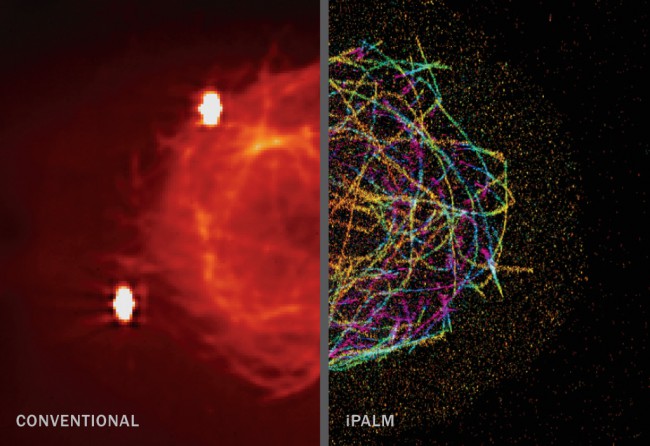 Betzig’s original dream had been to look at living cells with light microscopy. But even PALM has its limitations. For instance, it is too slow for some processes. As Betzig explained in the Washington Post last October, “trying to understand biology using these microscopes is like piecing together a football game from high-resolution photos. You can see images of a pass, and a touchdown, and of the cheerleaders doing a pyramid. But the rules of the game would only become clear once you saw a game on video.” In the end, he was “living the same nightmare again as I had experienced with near-field”, he said now. Only weeks after having learned about his Nobel Prize, and even before the official ceremony in Stockholm, Betzig published his next Science paper with a new, groundbreaking microscope technology: “Light sheet microscopy” that illuminates molecules plane by plane. This sheet of light comes in from the side of the sample, thus avoiding haze, and works “hundreds of times faster, with hundreds of times less light”, as the physicist explained today, thus hurting the sample of living cells significantly less. This technology, also called “lattice light-sheet microscopy”, is based on 3D Structured Illumination Microscopy (SIM) developed by the Swedish researcher Mats Gustafsson, who worked with Eric Betzig at the Janelia Research Campus of the Howard Hughes Medical Institute and who tragically died of a brain tumour in 2011, aged only 50. Betzig says that with lattice sheet, they will finally be able “to study cells as cells are” – in living organisms. Researchers will be able to look deep into living, evolving systems. He concludes, “This will be the high point of my career.” Not winning the Nobel Prize, but achieving his goal to watch live cells with a non-destructive method.