In the late 1980s when Carl Wieman was conducting his research at an atomic physics lab in Boulder, Colorado, he had many graduate students working in his lab. And repeatedly he would make the same observation: they came with excellent grades, had passed many physics courses and tests – but when given a research problem to work on, they were clueless how to proceed. They couldn’t think like scientists, i.e. they couldn’t break problems down, weren’t able to evaluate data, couldn’t question their own assumptions, etc. But “after just a few years of working in my research lab, interacting with me and the other students, they were transformed. I’d suddenly realise they were now expert physicists, genuine colleagues,” Wieman writes in his own blog on teaching science.

A passionate researcher by nature, Wieman was so puzzled by this persistent phenomenon that he approached it like any other research problem. One preliminary explanation he and his colleagues came up with was the ‘butterfly model’: Maybe the brains of all graduate students had to pass through a 17-year caterpillar phase before it could spread its butterfly wings and fly. But this explanation neither satisfied Wieman’s inquisitive mind nor was is very scientific. That’s when he started to approach this phenomenon with scientific methods: teaching several groups of undergraduate students with different methods and testing the outcome with a standardised test. 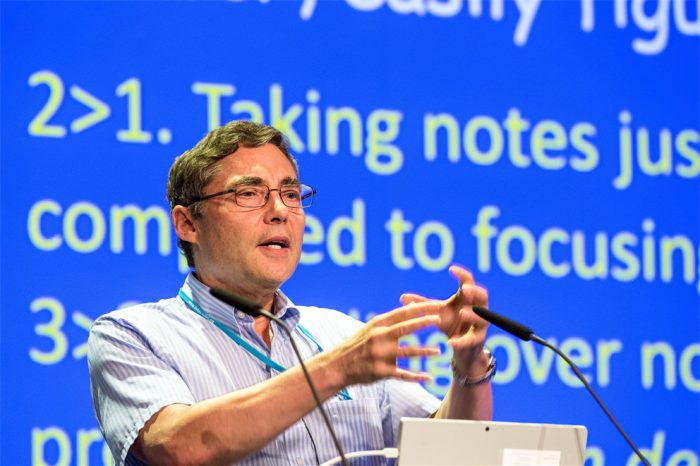 Wieman during his 2016 lecture at the 66th Lindau Nobel Laurate Meeting in Lindau. He’s just explaining how taking notes actually distracts students from following a lecture. He received the 2001 Nobel Prize in Physics together with Eric Cornell for the first Bose-Einstein condensate. Photo: Ch. Flemming/Lindau Nonel Laureate Meetings

Last week at the 66th Lindau Nobel Laureate Meeting, Carl Wieman outlined some of his findings in his lecture. According to his studies, students have the best test results if they learn a subject at home for one hour with good material from their professor; the second best if they listen to a lecture but don’t take notes. Interestingly students who revert to the classical learning method of attending lectures plus taking notes have the worst test results. What first seems surprising gets clearer when we think about this for a moment: note taking means you have to concentrate on at least two things at the same time: on the production of the notes (and their content will always lag behind the lecture) plus trying to follow the lecture that is proceeding regardless of the note-takers’ pace. Wieman calls this situation ‘cognitive overload’: if you try to memorise too many things simultaneously, in the end you will remeber very little.

Knowing this, it’s not surprising that Wieman and colleagues regularily encountered 50 percent drop-out rates from introductory science lectures, and over 10 percent failing rates of those who persisted. Furthermore, many students – among them many future teachers! – left college believing that physics and math were “uninteresting, irrelevant and unnecessarily hard to learn”, as Wieman writes in the New York Times. He continues: “After they take the typical undergraduate basic-science courses, they have more negative feelings toward the subjects than they did before.”

Wieman set out to change this: he donated his Nobel Prize money to his PhET initiative. In fact he had started to study ‘learning physics and how to improve it’ long before his Nobel prize, “it’s just that people didn’t pay attention to me until then,” he writes in Nature. From 2010-2012 he even served as associate director for science at the White House Office of Science and Technology Policy. He currently holds a joint appointment as Professor of Physics and of the Graduate School of Education at Stanford University.

After studying not only his own test results, but projects and tests from other researchers in the field of education psychology, Wieman designed a novel method to teach science: If students have to solve scientific problems in groups, discuss the tasks with each other and get frequent feedback from an instructor – they will start to think like scientists, they won’t drop out, and they will do much better in tests. “A key element involves instructors designing tasks where students witness real-world examples of how science works.” In his 2016 Lindau lecture Wieman explains that for building this kind of competence, “the brain needs to work really hard” to build up the relevant synapses – just reading notes isn’t enough for that. It’s like “building up a muscle”.

Teaching science in a way that basic concepts and approaches are understood and can be applied in various contexts isn’t only crucial for having better researchers in the future. “We need a more scientifically literate populace,” Wieman writes in a 2007 article, “to address the global challenges that humanity now faces and that only science can explain and possibly mitigate, such as global warming, as well as to make wise decisions, informed by scientific understanding, about issues such as genetic modification.” So teaching better science to a broader, more diverse population is also an inherently democratic approach to promote informed decision making, in contrast to political decision making that is mostly based on traditions or emotions.

The last event at the 2016 Lindau Meeting was the panel discussion ‘The Future of Education in Sciences’: Carl Wieman discussed his favourite subject with Nobel Laureates Dan Shechtman and Brian Schmidt on the beautiful Mainau island in Lake Constance, where Countess Bettina Bernadotte, Council President for the Lindau Nobel Laureate Meetings, grew up with her father, Count Lennart Bernadotte, one of the founders of the Lindau Meetings and also founder of the botanical gardens on the Mainau island.