Tweeting Lindau
Back
Let’s break down barriers – #lnlm14 It was the historical Higgs-Day two years ago. Wednesday, July 4, 2012. The whole world waited for the press conference at CERN. Will the data the Large Hadron Collider had sampled and thousands of scientists had interpreted be valuable enough for a confirmation of the Higgs Boson? Two years ago it was the physics meeting in Lindau and naturally the Laureates showed extremely high interest. During the CERN presentation Brian Schmidt, Nobel laureate in physics 2011, took a picture of his noble colleague David Gross and the secretary of the Nobel Committee in Physics, Lars Bergström. And Schmidt tweeted this picture. 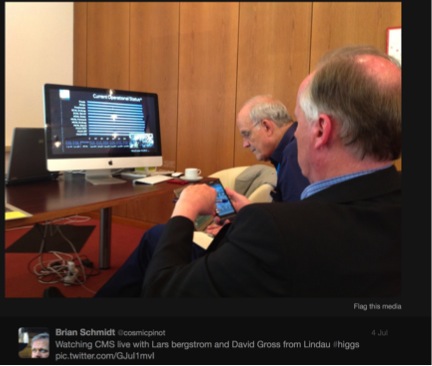 Women, especially the Nobel Peace Prize Laureates, even use Twitter and Blogging for a special initiative: Nobel Womens Initiative– @NobelWomen – this initiative uses the prestige of courageous women peace laureates to magnify the power and visibility of women working in countries around the world for peace, justice and equality. Karman and Gbowee engage themselves in this initiative together with five more Laureates. Two of the twitter-active Laureates listed above will attend the 64. Nobel Laureate Meeting in Lindau: Brian Schmidt, whom we already came to know, and Barry Marshall. First it looked like three of them will be in Lindau, but Peter Doherty had to withdraw his consent. All three are Australians, which makes an impressive rate: 3 out of 7 tweeting Nobel Laureates in natural sciences. Coincidence? I asked them, what they believe might be the reason:

“It is a great communication device – it breaks down barriers of distance and of hierarchy.”

This is exactly what the Lindau Nobel Laureate Meetings are about. Via our account @lindaunobel we will keep you updated on the ongoing discussions. Tweet with us. Let’s break down barriers. The hashtag ist #lnlm14. Related article Tweeted and Blogged Science 1Please tell me of any further twitter account by a Nobel Laureate. Thanks!