This could raise your citation...
Back
Barry Marshall always is an early adopter and always has been. He seems to be a person, who really wants to figure things out. Marshall is not only famous for his findings – he won the Nobel Prize in Physiology or Medicine together with J. Robbin Warren in 2005 “for their discovery of the bacterium helicobacter pylori and its role in gastritis and peptic ulcer disease”. Marshall is something of a figurehead for self-experimentation and certainly famous for the way he proofed his theory: By drinking down a dose of bacteria himself and afterwards proving his sickness. Then treating himself with a certain drug (tinidazole) for the healing. And proving his illness and cure by gastroscopy and biopsy. Such a man obviously wants to make the highest profit for humanity with his findings. To spread the word about it he launched his own website for the Helicobacter Foundation in 1994, when even most newspapers and journals had no online news site. “It paid off in a big way and saved me hundreds of hours of repetitive communication tasks”, Barry Marshall told me some days ago. In 2007 Marshall certainly again was an early adopter and one of the first Nobel Laureates, who started blogging. “What I know and what I think I know” says the header of his blog, with 15 entries until April 2012. Since then he only updated existing blog entries. “Lately I have been too busy to write my blog. I intend to do it but not many people read a blog unless you keep it going and update it often”, the social media professional Marshall explains. Not at least it would take 4 to 8 hours per week to keep it alive. But maybe there also is another reason for his weakened commitment to blogging: He has been joining the micro-blogging platform Twitter as @barjammar since 2009 which he mainly uses as a news stream. 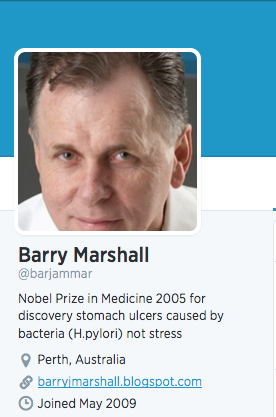 Asked why he writes at all in the public Marshall states: “I believe that if I like to do it, then I don’t need any other reason. So I enjoy doing a blog or tweets because I have an opinion on something. I retweet links to thoughtful articles I have read. And I seem to pick up on journalistic errors and send these out – some funny ones I recall.”  No wonder, someone who is so committed also recommends others to do so. Barry Marshall’s advice:

I recommend that researchers use twitter to highlight new things they have discovered and published. I think that high-quality tweets, even if they are less regular, are a way to increase followers. Ultimately this could raise your citation level.”

Thank you for your experiments, knowledge and advice, Barry Marshall!   Side note Thanks to following also other Nobel Prize winners like Brian Schmidt, Nobel Laureate in Physics 2011, Marshall knows some ‘secret news’ via Twitter: “I think Brian Schmidt is bringing some wine to Lindau and I am looking forward to tasting it”.

Schmidt is not only a great cosmologist but also has a vineyard near Canberra, Australia (nice article here). And yes, there will be Amungula Creek 2012 pinot noir in Lindau 2014 (Geek gastronomes save the day). Related articles Something worthwhile – Peter C. Doherty Tweeted and Blogged Science Tweeting Lindau