Françoise Barré-Sinoussi’s Fight Against AIDS
Back
Why HIV research always has a political dimension and why a renowned researcher can also be an international political activist. To be a scientist and an activist at the same time – for Nobel laureate Barré-Sinoussi this is an inevitable combination: after decades of research on the HI virus, she has truly worked ‘for the benefit of mankind’ (see video below with panel discussion). As the current president of the International Aids Society IAS, she held the opening speech at the Melbourne Aids conference, and she calls incessantly for increased efforts against the devastating virus. Before flying to Melbourne, she gave a lecture at the Lindau Nobel Laureate Meeting on current HIV research, always in view of strategies to fight the disease. 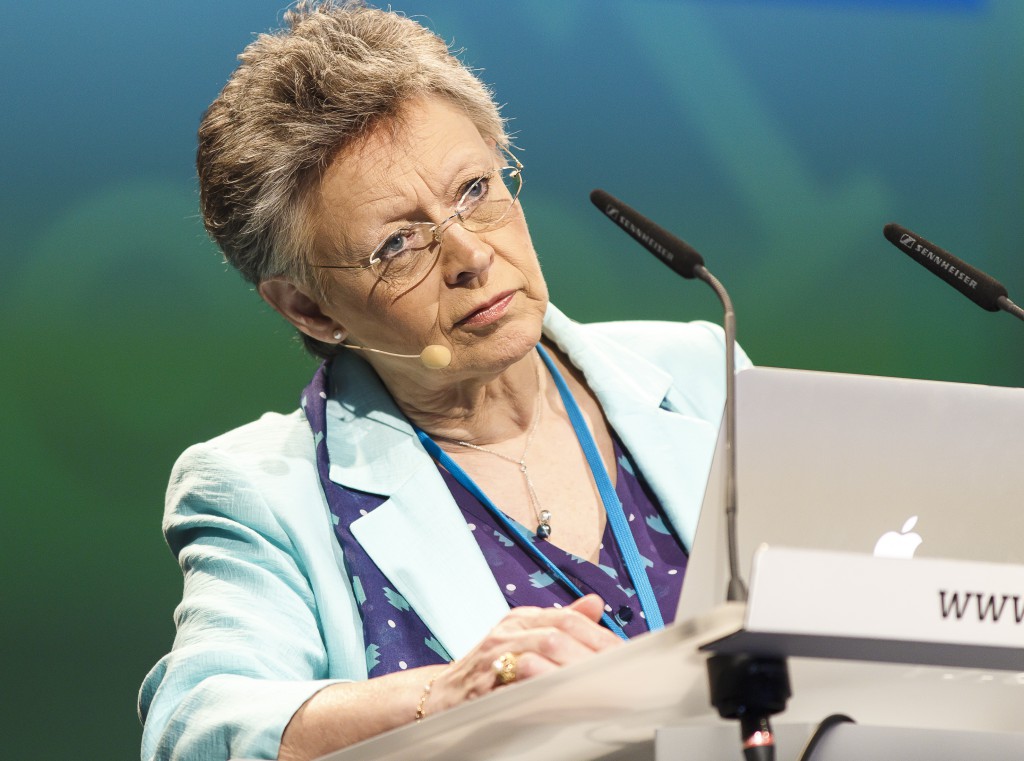 Françoise Barré-Sinoussi delivering her lecture ‘On The Road Toward an HIV Cure’ at the 64th Meeting’. Credit: R. Schultes/LNLM

While listening to Barré-Sinoussi, it becomes impossible to separate between her scientific interests and the significance of her work for affected and non-affected people alike – her work could indeed influence the lives of millions. In the face of this gigantic task, the French researcher from the renowned Institut Pasteur demonstrates an amazing will power in every lecture and interview. And not only the medical and scientific problems have to be tackled – the political and social dimensions can sometimes seem far more threatening, for stigmatisation and tabooing make preventive work to stop further transmissions very difficult. Aids has to be stopped on these two fronts, Barré-Sinoussi keeps explaining: in the bodies of HIV-positive patients, so that the virus cannot spread any further – plus new infections need to be prevented. That means that researchers all over the world are working on novel drugs to stop the virus in the body, while at the same time they are searching for future vaccines against HIV as one important preventive strategy. Nowadays we already have effective treatment options against the HI virus. But activists like Barré-Sinoussi hammer home the message that fears of repression make it all the easier for the virus to keep spreading. The numbers are horrific. As Barré-Sinoussi herself said in an interview a few days ago, about 14 million patients are currently treated with antiretroviral drugs, but at least another 15 million would need antiretroviral therapies (ART) – and between 30 and 50 percent of the infected don’t even know about the virus in their bodies. This is why the Melbourne conference wants to increase political pressures with its Melbourne Declaration:

“To defeat HIV and achieve universal access to HIV prevention, treatment, care and support – nobody should be criminalized or discriminated against because of their gender, age, race, ethnicity, disability, religious or spiritual beliefs, country of origin, national status, sexual orientation, gender identity, status as a sex worker, prisoner or detainee, because they use or have used illicit drugs or because they are living with HIV.”

So in order to finally overcome the HIV/Aids crisis, discrimination needs to be overcome first. Unfortunately, the Melbourne conference was overshadowed by the tragic death of researchers and activists who wanted to participate and whose flight number MH17 was shot down on July 17th, 2014. Karlijn Keijzer was a young chemist on this fateful flight. Her doctoral adviser said about her in Scientific American: “She inspired us all with her optimism about how science will make Earth a better place.” All researchers and activists killed on July 17th were working for the benefit of mankind. The delegates present in Melbourne will continue to combat HIV with great commitment – also in dedication to their deceased fellow colleagues.