Thanks to a lucky twist of fate, Marie Meloney, a prominent American journalist, took it into her head to persuade Nobel Laureate Marie Curie to do an interview with her and refused to be put off by Curie’s stubborn refusal. Meloney had started her career in journalism at the Washington Post at the age of just 15, worked as a correspondent for the Denver Post at 18 and was later the editor of various major magazines. She also hosted glamorous receptions, had political ambitions and was a feminist. Meloney was a confidante of Eleanor Roosevelt, who admired her for her determination. 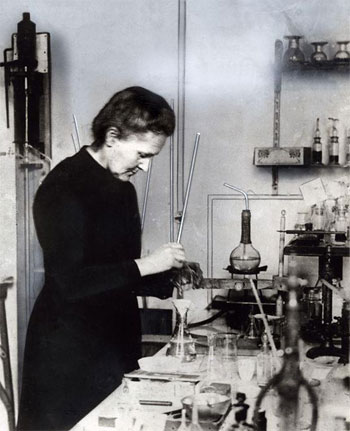 Marie Curie in her chemistry laboratory at the Radium Institute in France, April 1921. Source: Nationaal Archief of the Netherlands / No known copyright restrictions

When the long-desired meeting with Curie finally took place in 1920, despite her 20 years experience as a journalist, Meloney’s courage initially failed her: “The door opened and I saw a pale, timid little woman … with the saddest face I had ever looked upon. (…) Suddenly I felt like an intruder.”

Meloney perceived Curie as ‘helpless’ and took refuge in a discussion about the admiration of American women for her work. Without beating about the bush, Marie Curie got straight to the topic closest to her heart: radium. She knew the precise locations in America where a great deal of it was available. Meloney was completely astonished by the spartan working conditions of the two-time Nobel Laureate. Pierre and Marie Curie had registered no patents and had decided that their research findings should be available to all of humanity and not individuals. This meant that they were reliant on other sources of income.

During the interview Marie Meloney asked a question that went on to have far-reaching consequences: What would Marie Curie wish for, if she could wish for anything? The answer came without hesitation: a gram of radium! The reason for this was that the entire radium stocks of her French institute were used for medical applications, and Marie Curie was literally empty-handed.

Meloney devised a cunning plan: a gram of radium had a market value of 100,000 dollars in the USA – and she would raise the money for it. When an initial attempt to raise the money privately failed, Meloney launched the fundraising campaign later known as the “Marie Curie Radium Fund”, which was aimed at all American women who wanted to support Marie Curie’s work. And one year after the visit, the necessary funds had been raised. 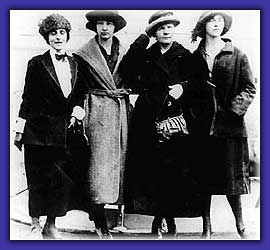 Meloney wrote to Curie and asked her to come to the USA and receive the gift in person. Warren Harding, the President of the United States of America, would present her with the radium himself. Her daughters could accompany her, and every attempt would be made to shield them from too much publicity. What the publicity-shy scientist feared most was to be paraded in public as an individual. Curie had single-mindedly avoided public appearances up to then; life for her was all about science and her family. But this was an offer she could not refuse, so at the age of 54 she embarked on her first major official trip abroad in spring 1921. A jubilant crowd and a horde of photographers awaited her on her arrival in New York.

The generous donors to the Radium Fund were women of very different origins and class – Curie was feted as a cancer healer, a role model for female scientists and a working mom. Marie Curie was an ideal representative of the type of woman with whom women in America identified in the 1920s. Her veneration in the academic world, which was also strongly masculine in its orientation in America, did not detract from this: Marie Curie was showered with honorary doctorates and other awards. Although Harvard – unlike Yale – denied her this honour, the majority of American academics could not understand why Marie Curie was not similarly honoured and supported in France.

The schedule for the visit proved to be a heavy burden on the scientist, whose state of health was already very frail, and her host and the press were concerned about her. Her modest appearance and cerebral air seemed to fuel the enthusiasm for her even more, however. The most important commitments, which Curie was unable to fulfil herself, were assumed by her daughters Irène and Ève.

The tour started with visits to women’s colleges and the crowds of enthusiastic female students who feted Curie, and an overwhelming reception in Carnegie Hall. Marie Curie entered the event to the thunderous applause of over 3,500 members of the International Federation of University Women. The French and Polish ambassadors were also in attendance. This was followed by a party at the Waldorf Astoria with over 500 representatives of scientific organisations – all before the presentation of the gift on 20 May 1921 at the White House. 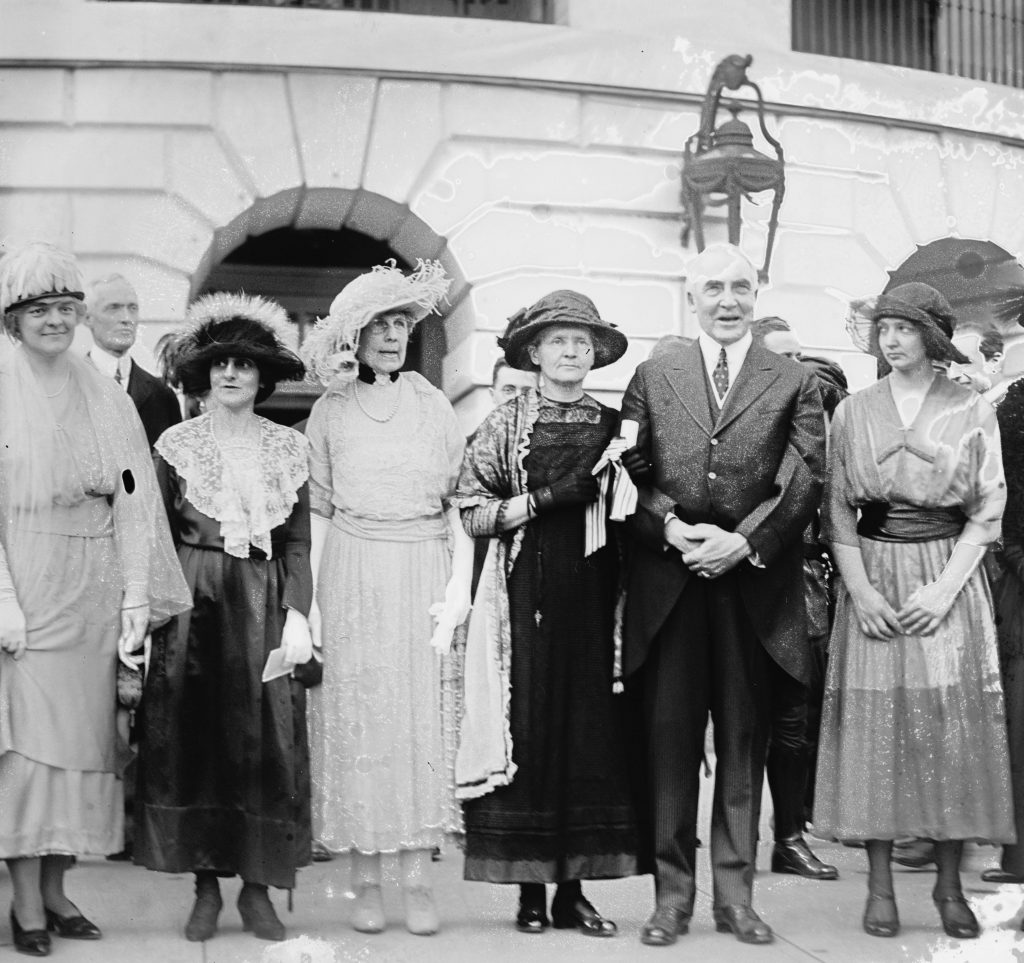 Every trick in the publicity book was used for the presentation ceremony: Marie Curie entered on the arm of President Warren Harding and was presented with a parchment scroll (the deed of donation) and silk scarf tied with a small key – the key to the casket containing the radium; the latter was fake, however, as the radium remained in the factory so that it did not pose a threat to anyone present. In his address, President Warren Harding referred to Marie Curie as a “…noble creature, the devoted wife and loving mother who, aside from her crushing toil, had fulfilled all the duties of womanhood”. Curie thanked him for his kind words saying she had been honoured “… as no woman has ever been honoured in America before”.

Marie Curie’s trip to the USA was a great personal success and undoubtedly made an important contribution to providing security for her further scientific work, her institute and all the young researchers working there. It also gave her greater latitude in her private life. In her biography of her mother, Ève Curie wrote: “I believe the journey to America taught my mother something. It had shown her that the voluntary isolation in which she confined herself was paradoxical. (…) Marie was responsible for a new science and a new system of therapeutics. The prestige of her name was such that by a simple gesture, by the mere act of being present, she could assure the success of some project of general interest that was dear to her.”

Thanks to Marie Meloney, Marie Curie enjoyed greater fortune in the following years and the two women remained friends for life. In May 1922 Marie Curie became a member of the International Committee for Intellectual Cooperation and was its Vice-President until 1934. During her 12 years of activity for this League of Nations’ committee she supported, among other things, the establishment of an international bibliography of scientific publications and a copyright system for scientists and their inventions.

A video presenting an overview of Marie Curie’s life and scientific achievements is available in the Mediatheque.

A Devotion to their Science. Pioneer Women in Radioactivity, Marelene and Geoffrey Rayner-Canham