That was #LINOecon! A week full of personal encounters, inspirational talks and fruitful scientific discussions. We were saying goodbye with the traditional boat trip from Lindau to Mainau Island. The scientific programme was concluded with a timely Panel Discussion on „Economics and Politics of War and Sanctions“. Subsequently, Countess Bettina Bernadotte, Laureate Eric S. Maskin and young economist Raisa Sherif adressed the audience in their farewell speeches and once again ignited the Lindau Spirit. In the afternoon, the Science Picnic was a great opportunity to refuel for our boat trip back to Lindau Island. Eventually, the 7th Lindau Meeting on Economic Sciences ended with our arrival in Lindau. Disembarking, the young economists turned into Lindau Alumni!

Quotes of the Day

„Old guys like me sometimes worry about the future of the subject. With young people like you coming up, economics is in good hands.“

„Sometimes it takes time to recognize a life-event as such. In this case I knew from the first day here.“

„Going Micro for a Better World” is the title of Ben Skuse’s latest post in our blog. He summarises the insights into microeconomic research presented by this year’s #LINOecon Laureates. 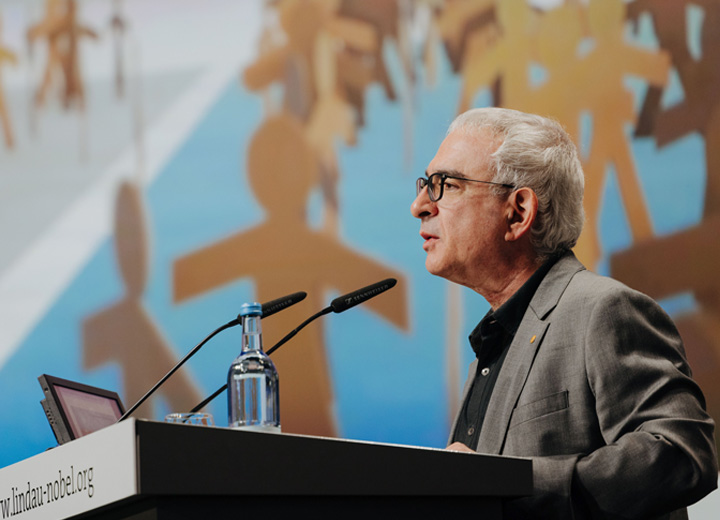 In total, 40 Nobel Laureates and more than 700 young scientists and economists enjoyed the personal exchange onsite at this year’s Lindau Meeting on Economics Sciences and the Lindau Nobel Laureate Meeting dedicated to Chemistry, which had already taken place in June.

All 60 sessions of this year’s Lindau Meetings are available in our Lindau Mediatheque.

Definitely the intellectual highlight of the Lindau meeting #LINOecon for me https://t.co/ndfWFRpKex

I had the honor to spend the past week in beautiful Lindau at the #LINOecon @lindaunobel. Thanks for all the fantastic lectures, the interesting conversations and new connections! pic.twitter.com/LXaSQ2MGlz

I have to admit: #LINOecon is by far the best organized event I've ever attended

The closing panel discussion at #LINOecon adressed the topic of “Economics and Politics of War and Sanctions”.

Below you can find all daily recaps of the past week. Additionally, you can refer to our blog to find all posts of the day, as well as additional ones discussing #LINOecon sessions. One more time we recommend photos of the week on our Flickr account.