Visualising the Genome’s 3D Code
Back

The genetic code is a sequence of letters spelling instructions for a cell’s normal growth, repair and daily housekeeping. Now, evidence is growing for a second code contained in DNA’s tangled structure. The location and packing density of nucleic acids may control which genetic instructions are accessible and active at any given time. Disrupted genome structure could contribute to diseases such as cancer and physical deformities.

To fit inside a cell, DNA performs an incredible contortionist feat, squeezing two metres of material into a nucleus only a few micrometres wide. DNA compacts itself by first wrapping around histone proteins, forming a chain of nucleosomes that looks like beads on a string. Nucleosomes then coil into chromatin fibres that loop and tangle like a bowl of noodles.

To reveal the structural genetic code, researchers examine chromatin from its sequence of nucleotides to the organisation of an entire genome. As they develop microscopy techniques to better visualise the details of chromatin structure, even in living cells, they’re better able to explore how structural changes relate to gene expression and cell function. These developing pictures of chromatin structure are providing clues to some of the largest questions in genome biology.

A prevailing theory about chromatin structure is that nucleosomes coil into 30 nm fibres, which aggregate to form structures of increasing width, eventually forming chromosomes. The evidence for this comes from observing 30 nm and 120 nm wide fibres formed by DNA and nucleosomes purified from cells.

A team led by Clodagh O’Shea, at the Salk Institute for Biological Studies wondered what chromatin looked like in intact cells. In 2017, the researchers developed a method to visualise chromatin in intact human cells that were resting or dividing. The researchers coated the cells’ DNA with a material that absorbs osmium ions, enabling the nucleic acid to better scatter an electron beam and by doing so appear in an electron micrograph. Next, they used an advanced electron microscopy technique that tilts samples in an electron beam and provides structural information in 3D. The researchers noticed that chromatin formed a semi-flexible chain 5 to 24 nm wide that was densely packed in some parts of the cell and loosely packed in others. 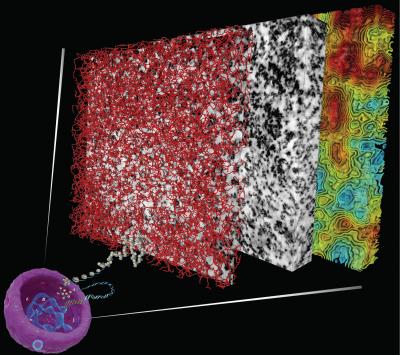 “We show that chromatin does not need to form discrete higher-order structures to fit in the nucleus,” said O’Shea. “It’s the packing density that could change and limit the accessibility of chromatin, providing a local and global structural basis through which different combinations of DNA sequences, nucleosome variations and modifications could be integrated in the nucleus to exquisitely fine-tune the functional activity and accessibility of our genomes.”

Along with packing density, location is another component of chromatin structural organisation. Researchers have known for three decades that chromatin forms loops, drawing genes closer to sequences that regulate their expression. Biologist Job Dekker, at University of Massachusetts Medical School in Worcester, and his colleagues have developed several molecular biology-based techniques to identify neighbouring sections of chromatin 200,000 to one million bases long. One of these techniques, called Hi-C, maps chromatin structure using its sequence.

In Hi-C, researchers first chemically crosslink the nucleic acid to join portions of chromatin that are near each other. Then they use enzymes to cut the crosslinked chromatin, label the dangling ends with a modified nucleotide, and reconnect only crosslinked fragments. Finally, the researchers isolate the chromatin fragments, sequence them, and match the sequences to their position in a cell’s whole genome.

In 2012, Bing Ren, at the University of California, San Diego School of Medicine,and colleagues used Hi-C to identify regions of chromatin they called topologically associating domains (TADs). Genes within the same TAD interact with each other more than with genes in other TADs, and domains undergoing active transcription occupy different locations in a nucleus than quiet domains. Altered sequences within a TAD can lead to cancer and malformed limbs in mice.

The basic unit of a TAD is thought to be loops of chromatin pulled through a protein anchor. Advanced computer models of chromatin folding recreate chromatin interactions observed using Hi-C when they incorporate loop formation. But genome scientists still aren’t sure which proteins help form the loops. Answering that question addresses a basic property of DNA folding and could point to a cellular mechanism for disease through mutations in a loop anchor protein.

Advanced optical microscopy techniques, based on a method recognised by the 2014 Nobel Prize in Chemistry, are also providing information about how regions of chromatin tens of bases long could influence cell function. Super-resolution fluorescence microscopy enhances the resolution of light microscopes beyond the 300-nm diffraction limit. This technique uses a pulse of light to excite fluorescent molecules, and then applies various tricks to suppress light shining from those molecules not centred in the path of the excitation beam. The result is the ability to image a single fluorescent molecule.

Biological molecules, however, can carry many fluorescent labels, making it difficult to localise a single molecule. Using fluorescent labels that switch on and off, researchers activate and deactivate fluorescent molecules in specific regions at specific times. Then they stitch the images together to capture the locations of all the fluorescent tags.

Xiaowei Zhuang, at Harvard University, and colleagues used super resolution microscopy to follow how chromatin packing changed based on its epigenetic modifications. Their method provided images on a scale of kilobases to megabases, a resolution between that of pure sequence information and large-scale interactions available through Hi-C. Information about gene regulation and transcription happens on this scale. This technique also offers the potential of imaging nanometre-scale structures in live cells.

Using a variety of methods to capture static and dynamic cellular changes, researchers around the world are working to write a dictionary of the structural genetic code throughout space and time. The 4D Nucleome Network, funded by the National Institutes of Health, and the 4D Genome Project, funded by the European Research Council, are identifying a vocabulary of DNA structural elements and relating how that structure impacts gene expression. They’re also curious about how chromatin structure changes over the course of normal development as well as in diseases such as cancer and premature aging. With many basic questions outstanding, much remains to be discovered along the way.