Tracing the Beginnings of a...
Back

Young scientists attending a Lindau Nobel Laureate Meeting frequently ask the laureates for career advice, so it was not surprising that they filled the room for a discussion with J. Michael Bishop and Harold Varmus about career planning. Seeing colleagues seated in the front row, Bishop quipped: “It seems like even some laureates are considering a second career.”

The men, who shared the 1989 Nobel Prize in Physiology or Medicine, started the discussion by sharing stories about the beginning of their careers. They recounted experiences from their childhood, scientific training and early years in research.

The title of the discussion was “Can Scientific Careers Be Planned?”, although it seemed both Bishop and Varmus ended up as researchers without much advanced planning. Both advocated prolonging adolescence until they were 30 years old, first following their interests and passions to study humanities in college. When each man finally entered medical school, they sought opportunities to learn molecular biology, efforts that would become the basis for their Nobel-winning work on the genetics of cancer-causing viruses.

Bishop grew up in a town of 400 people in rural Pennsylvania. He attended school at a two-room schoolhouse until eighth grade. Little science was taught there, he said, but one of his teachers inspired a passion for learning and studying history.

In college, Bishop said he took just enough science classes to prepare him for medical school. Meanwhile, he also studied history, literature and philosophy. Following the recommendation of a teacher, he applied to Harvard University for medical school, even though he had never heard of the school.

In medical school, Bishop noticed that some of his teachers taught facts, while others taught how those facts were acquired. “I realised I was more interested in discovery than applying known knowledge,” he said.

A pathology fellowship following his second year of medical school presented an opportunity to do some research, and it also provided free time to read. Bishop discovered a passion for the emerging science of molecular biology, traveling to the library at the neighbouring Massachusetts Institute of Technology to read the latest papers in the Journal of Molecular Biology.

Returning to his third year of medical school, Bishop continued to follow his new passion by taking a course in animal virology. He realised little was known about the viruses in animal cells and the tools of molecular biology could be used to learn more. Bishop worked with the course’s teacher doing research on genetics of RNA viruses. He found research so engaging that he planned to not complete his final year of medical school. The school’s dean compromised with Bishop, finding a way for him to finish his last year of school while still spending most of his time in the lab. 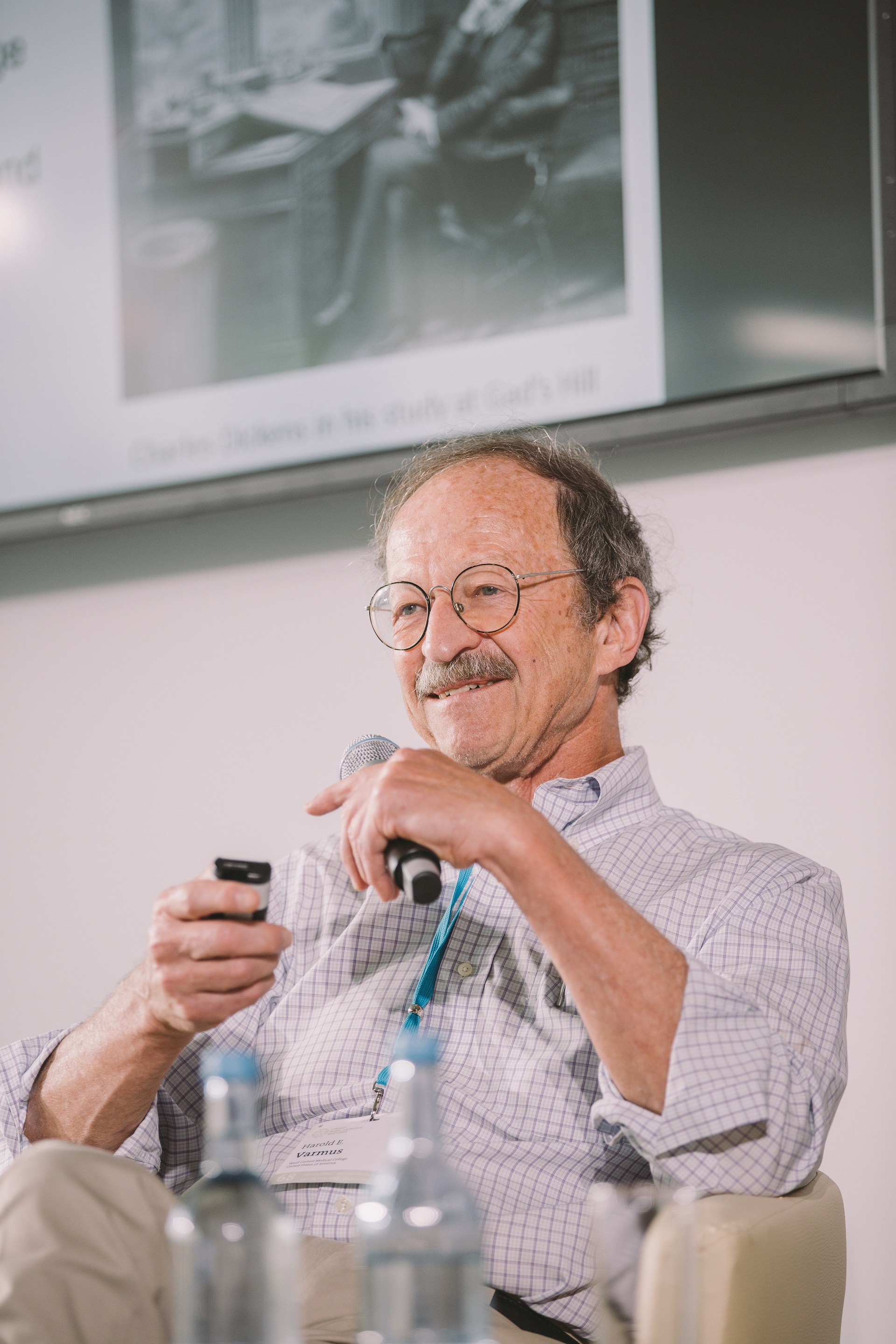 After two years of training as a physician at Massachusetts General Hospital, Bishop entered the Research Associate Training Program at the National Institutes of Health to train as a researcher. Then a job at the University of California, San Francisco, brought the opportunity to work with a virus that causes cancer in chickens, the beginning of his work recognised by the Nobel Prize.

Bishop summarised elements of his story that were key to discovery, including an eye for the main chance, a willingness to take risks tempered with appropriate reality checks and a faith in the universality of nature – that the cancer-causing genetic elements in a chicken virus would also apply to human cancers. Finishing with a reflection on the cause of his few self-described major failures as a scientist, he said: “I lost trust in my own ideas and surrendered to someone else’s scepticism.”

Bishop and Varmus met in 1969, when Varmus was looking for a post-doctoral position in California. The men quickly discovered that they shared the same ideas about viral connections to cancer, and Bishop has described their ensuing collaboration as one of co-equals. When Varmus eventually joined the faculty at UCSF, he and Bishop shared lab facilities, personnel, and funds. A photo of smiling scientists at a group dinner shows what happens when you create an environment in the lab where people want to gather both in and out of the lab, Varmus said.

Varmus mentioned that specific world events during his scientific training were favourable for beginning a career in science in the United States. The launch of the Russian missile Sputnik during his first week of college sparked federal initiatives to support science education in the US. When the Vietnam War happened during his medical training, Varmus found he could discharge military service mandatory for doctors by entering the public health service. Joining other “yellow berets” in the Research Associate Training programme at the NIH, Varmus got his first taste of life in the research lab and was inspired to continue studying tumour virology. Finally, the National Cancer Act of 1971 provided a funding boost that benefited his work.