This year’s Nobel Prize in Physics was awarded one half to Arthur Ashkin for his research on optical tweezers that led to new insights into biophysics and cell biology, and one half jointly to Donna Strickland and Gérard Mourou for their research on new methods to create intense laser pulses that have changed manufacturing and medical procedures.

The prize is the latest in a series of awards to recognise developments in laser technology that demonstrate how lasers continue to be the wave of the future. Lasers were first developed in 1960, and they have since revolutionised scientific instruments, medical procedures, and manufacturing, among many other applications. Here’s how the two advances recognised by the 2018 Nobel Prize came to be and how they are used today.

Lasers generate an intense, narrow beam of single-colour light with waves aligned in direction, frequency, and phase. Light particles, called photons, travel inside those waves, and generate optical forces when they hit an object and scatter.

In 1970, Arthur Ashkin, one of this year’s physics laureates, used those forces to pull a microparticle into a laser beam and trap it inside. Eventually, he also suspended a virus and a living cell. His technique, called ‘optical tweezers’, has since been key to studying the kinetics and mechanics of cellular motors and components.

When Ashkin first suspended a micron-sized particle inside a laser beam, he noticed that the particle was drawn into the center of the beam, where the intensity was the greatest. He realised that two types of optical forces kept the particle trapped in the beam. The forward motion of photons pushed the particle in the direction of the laser light. This radiation pressure was strong enough to levitate microparticles inside a vertical laser beam. 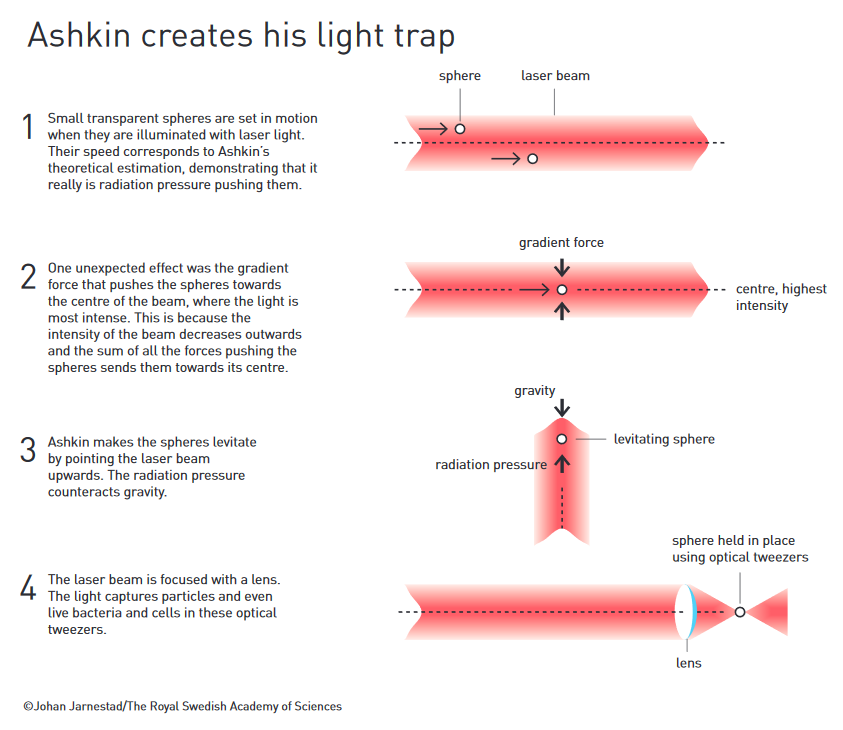 A second force, the one that drove the particle toward the center of the beam, also traps it inside the beam. This gradient force results from the laser’s intensity being weaker on the edges of the beam and strongest in the center. Focusing the beam with a lens generates a very steep intensity gradient, so that the gradient force becomes stronger than the one pushing the particles forward in the beam. Once Ashkin and his colleagues added a lens to their optical tweezers, they trapped particles 10 µm to 25 nm in diameter in water.

While experimenting with trapping different kinds of particles, Ashkin realised he could trap a virus or a bacterial cell. He changed the system to use an infrared laser, instead of a green one, and then he could even trap living cells. Because of Ashkin’s work on biological systems, optical tweezers are now commonly used in biophysics and cell biology. Groundbreaking biophysical experiments with optical tweezers include attaching a protein called ‘kinesin’ to an optically trapped bead. Inside cells, kinesin carries molecular cargo throughout cells by walking along filaments called microtubules. Using optical tweezers, researchers made the first measurements of the length of each of kinesin’s steps.

Donna Strickland and Gérard Mourou shared the other half of the 2018 Nobel Prize in Physics for their method of boosting the intensity of ultra-short laser pulses in a way that did not melt the laser components. Their approach has led to industrial and medical applications of lasers, including precision manufacturing and eye surgery.

During the first 25 years of laser development, researchers figured out how to create ultra-short pulses of laser light, but the intensity of these pulses was limited. They could only amplify nanojoules of energy in each pulse to the millijoule level because more intense pulses damaged the amplifying material and laser components.

One way researchers increased the pulse intensity was by widening the beam diameter to disperse its intensity. However, this required large and costly equipment that only national research institutes could host. Also, these lasers could only deliver a few pulses each day, because they needed time to cool down between shots.

In 1985, Strickland and Mourou described a method to solve this problem. Inspired by radar technology, they decided to reduce the peak power of a laser pulse by first stretching its wavelength by several orders of magnitude. Then they could amplify the wave without damaging the material. Finally, they compressed the wave to restore its original properties. Two years after demonstrating chirped pulse amplification, they altered the components of the system and amplified nanojoule pulses to joules of energy – an increase of nine orders of magnitude. 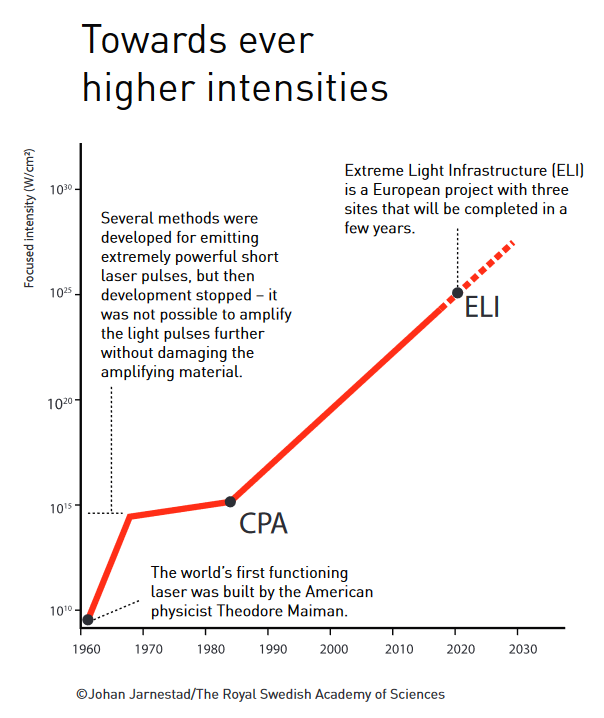 Following the development of chirped pulse amplification, researchers used it to deliver increasingly short and intense laser pulses. These pulses combined to create high powered lasers in affordable instruments. Academic researchers can now purchase tabletop lasers that deliver terawatts of power, the peak power of the large lasers once only found at research institutes. Institutes now run petawatt lasers, and at least 50 petawatt lasers are operating, under construction or being planned worldwide. The Extreme Light Infrastructure Beamlines facility, a project spearheaded by Mourou and under construction in Prague, Czech Republic, will have a 10 PW laser system.

These ultrafast, high intensity laser pulses have opened new areas of research in physics, including studying matter in the condensed phase and the dynamics of electrons inside atoms.

Additional Note: Find out more about the fascinating world of Laser Technology in a Topic Cluster in our mediatheque.