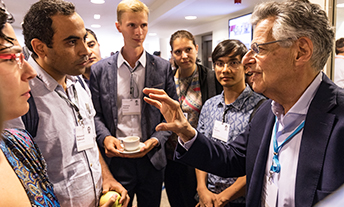 Young economists from around the globe and Laureates in Economic Sciences will gather for in-depth exchange of knowledge and ideas during the 7th Lindau Meeting on Economic Sciences. Together they will discuss current economic matters and recent discoveries in their field.

For the nominated candidates, please note that the deadline for completing your young scientist profile is according to the notification mail you received. For further questions, please contact the team of the Young Scientist Support. Find an overview of the multi-step nomination and application process here. 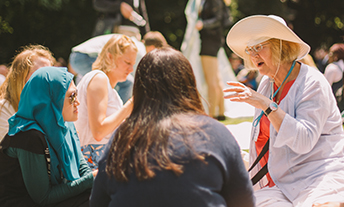 The Lindau Declaration 2020, first suggested by Nobel Laureate Elizabeth Blackburn, aims to get wide-spread support for a new approach to global, sustainable, cooperative open science. Until its publication during the Lindau Meeting 2020, the declaration is open for debate, changes and amendments.

While it was formulated with basic research as its primary focus, its principles and goals can apply to all types of science. The declaration draws upon, refers to and supports various already existing initiatives. It is a call to widely support new ways in science. The declaration currently consists of 10 goals, which are supported by its signatories.

There have already been two socio-political appeals in the longstanding history of the Lindau Nobel Laureate Meetings, each presented on Mainau Island, the traditional venue of the last meeting day. The Mainau Declaration 1955 was an appeal against the use of nuclear weapons. During the 65th Lindau Meeting 2015, 36 Nobel Laureates initially signed the Mainau Declaration on Climate Change as an urgent warning of the consequences of global warming.