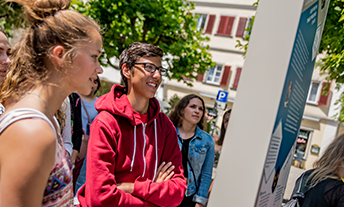 To promote wide recognition for science and research and to foster support for a knowledge-based society is the overall ‘Mission Education’ of the Lindau Nobel Laureate Meetings – and it applies especially to the area of science education. In this spirit, educative content of the mediatheque is being gradually developed for use in schools. Moreover, teachers are supported in their work and involved in the dialogue with scientists.

Children and young people usually become enthusiastic about science at school. This is where they acquire the basic knowledge and skills for a research career. Teachers play a significant part in the fundamental training of future scientists. As part of the overall mission to support and promote initiatives towards more and better education, Teaching Spirit is a programme that rewards teachers who have shown extraordinary dedication in teaching science in school.

Select teachers from Austria, Germany and Switzerland are invited to attend the Lindau Nobel Laureate Meeting to gain inspiration and new ideas for creative and motivational teaching.

With unique content dating back to 1952, the mediatheque of the Lindau Nobel Laureate Meetings maps their rich history of scientific dialogue. The mediatheque is gradually being developed further to provide a learning platform and research resource for scientists and those fascinated by science, particularly teachers and students. Moreover, select mediatheque content is successively made accessible via educative content providers.

More than half of the approximately 1,000 lectures held by Nobel Laureates at the Lindau Meetings thus far have been documented in the mediatheque: It contains 500 videos or picture slide shows, many of which are subtitled and annotated, as well as abstracts and full transcripts.

The mediatheque contains biographical profiles of all Nobel Laureates who have thus far participated in the Lindau Meetings. They are gradually being supplemented with explanatory information on the scientific accomplishments of the laureates, relating their research to historical as well as to contemporary scientific context.

By clustering and contextualising related mediatheque content in Topic Clusters, a team of editors continuously compiles comprehensible introductions to major scientific fields and topics, like cancer, proteins, or subatomic particles.

Following a contemporary didactic approach, the mediatheque is complemented with short animated videos  – Mini Lectures – outlining key issues of science and research in both an educative as well as an entertaining fashion.

So far, 16 Nobel Laureates have made their workplaces virtually accessible in the mediatheque: The 360° panoramic photos taken by German photographer Volker Steger depict their labs in great detail; embedded video and audio recordings add to the entertaining and educational experience of a virtual lab tour. Nobel Labs 360° can be displayed in web applications, on personal tablet computers, or on large touch screens in exhibitions.

With Life Paths, mediatheque users can vividly display and compare the life and career paths of Nobel Laureates on a rotatable globe. The data from their biographies was compiled and processed in cooperation with the Max Planck Institute for the History of Science. The more life paths tracked, the more convenient it becomes to identify parallels and differences in researchers’ careers. Life Paths is based on an idea by Nobel Laureate Arno Penzias. 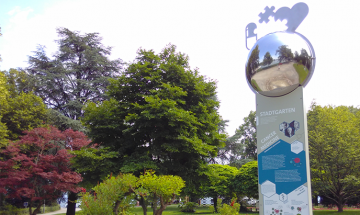 On the Lindau Science Trail, explorers big and small can learn more about discoveries that have been honoured with the Nobel Prize. In total, the Science Trail comprises 20 knowledge pylons, 15 are located on the island of Lindau, two on the mainland and three on Mainau Island.

As part of the ‘Mission Education‘, the Lindau Science Trail makes the ‘Nobel knowledge’ freely available to everyone at all times and serves as a permanent embodiment of the Lindau Nobel Laureate Meetings. Therefore, the Science Trail can be followed not only by those living in and around the picturesque city of Lindau, but also visitors from all over the world can go on their very own journey of discovery. There is a special children’s section on every pylon that awakens the enthusiasm for science even in the smallest researchers.

The Lindau Science Trail was made possible through the support of the city of Lindau and the Prof. Otto Beisheim Stiftung.

With the web-based Virtual Science Trail, users can explore the knowledge pylons also digitally – irrespective of space or time. An online map guides to the various pylons, and panoramic images enriched with multimedia elements ensure an exciting experience.

Embark on a fascinating journey on the Virtual Science Trail here. 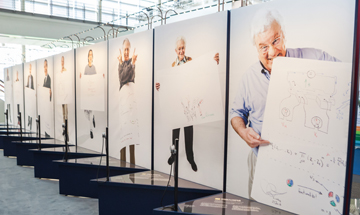 Why not ask Nobel Laureates to make a sketch of the discovery for which they received the Nobel Prize – and then ask them to present their artwork to the camera? This is exactly what German photographer Volker Steger did to create the exhibition “Sketches of Science”.

In his photos, Volker Steger captures the spontaneity and creativity of Nobel Laureates; the pictures express the enthusiasm of scientists and researchers for their work. An exhibition of 50 photos of the series was launched at the Nobel Museum in Stockholm in June 2012, and has been on tour around the globe ever since. 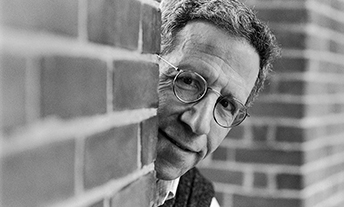 German photographer Peter Badge chose to specialise in the classic genre of portraiture for the photo series “NOBELS”. His ambition is to create a comprehensive gallery of unique personal portraits of each and every living Nobel Laureate. What began as a small collection in the year 2000 now encompasses nearly 400 portraits.

Badge’s black-and-white photos reveal the personality of the portrayed laureates and generate recognition for their scientific, literary or humanitarian achievements. Many of the photos were taken at the Lindau Meetings, but the project has also taken Badge all around the globe. 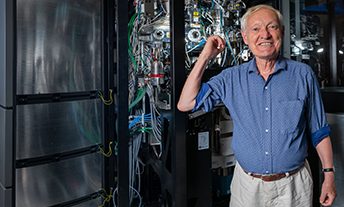 Being taken on a guided tour through the laboratories and offices of Nobel prize-winning researchers is certainly not a common thing. But the project Nobel Labs 360° opens doors to anyone interested in looking behind the scenes: eighteen Nobel Laureates have made their workplaces accessible virtually.

German photographer Volker Steger’s 360° panoramic photos depict every detail of the places he gets invited to. They can be displayed in web applications, on personal tablet computers, or on large touch screens in public exhibitions. Embedded video and audio recordings add to the entertaining and educational experience of the virtual lab tours. 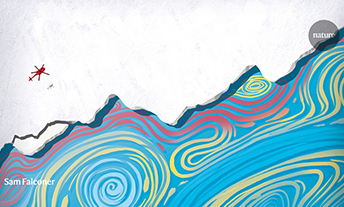 Since 2010, the Lindau Nobel Laureate Meetings have each been featured in Nature Outlook, the supplement to the scientific journal. With their content mix of full-length features, articles and interviews, these publications serve as high-quality, enduring records of the vivid exchange among laureates and young scientists.

Thanks to the support of Mars, Incorporated, the following supplements have been published:

From 2008 to 2016, Nature Video produced a series of films that focuses on select topics and participants of the Lindau Meetings. These educative and entertaining films showcase what “Lindau” is all about: sharing knowledge and ideas, seeking inspiration and motivation, finding companions and friends, and forging networks.

Thanks to the support of Mars, Incorporated, and in association with Scientific American, the following series have been produced:

Nobel Laureates in Their Own Words (2015)