#LINO19 young scientist Dominika Wylezalek from Germany is a postdoc at the European Southern Observatory in Garching/Munich, Germany.

One of the main science drivers in her research is to understand how galaxies form and evolve and what physical processes are most important at different cosmic epochs and spatial scales. Dominika is particularly fascinated by the role of supermassive black holes in galaxy evolution which are now thought to be hosted by every galaxy in the Universe and which can significantly impact the evolution of the galaxies they reside in. But how exactly this happens is a major question in extragalactic astrophysics and resolving this questions is the major goal of her research. Enjoy the interview with Dominika and get inspired!

When I was five or six years old, on clear starry nights, outside in my parent’s garden, I started to wonder how big the universe was and what was behind its boundaries. Neither my mum nor my dad could ever give me a satisfactory answer apart from “it’s infinite”. When I protested: “No, but it has to have a boundary and there must be something behind it”, they would just repeat the same sentence: “It’s infinite.” That did not satisfy me at all. I think it was then that I decided — although this was not a conscious decision — to learn and study hard enough to become an astronomer and work on understanding the universe better.

As a teenager, I was easily interested in and excited by many different topics and my “dream job” included everything from being a vet, medical doctor, politician, to restaurant owner. However, I still enjoyed physics the most and decided to start my studies at the University of Heidelberg, which offers a wide range of astronomy classes as part of the physics curriculum.
After finishing my BSc in Heidelberg, I moved to the University of Cambridge in the UK to obtain my master’s degree. Although that year was probably the most study-intensive year of my life, I greatly enjoyed having the opportunity to attend lectures by some of the top astronomers in the world and was highly inspired by the academic environment in Cambridge. I vividly remember finding Stephen Hawking’s office during one of my first weeks there and taking a selfie with the name plaque. 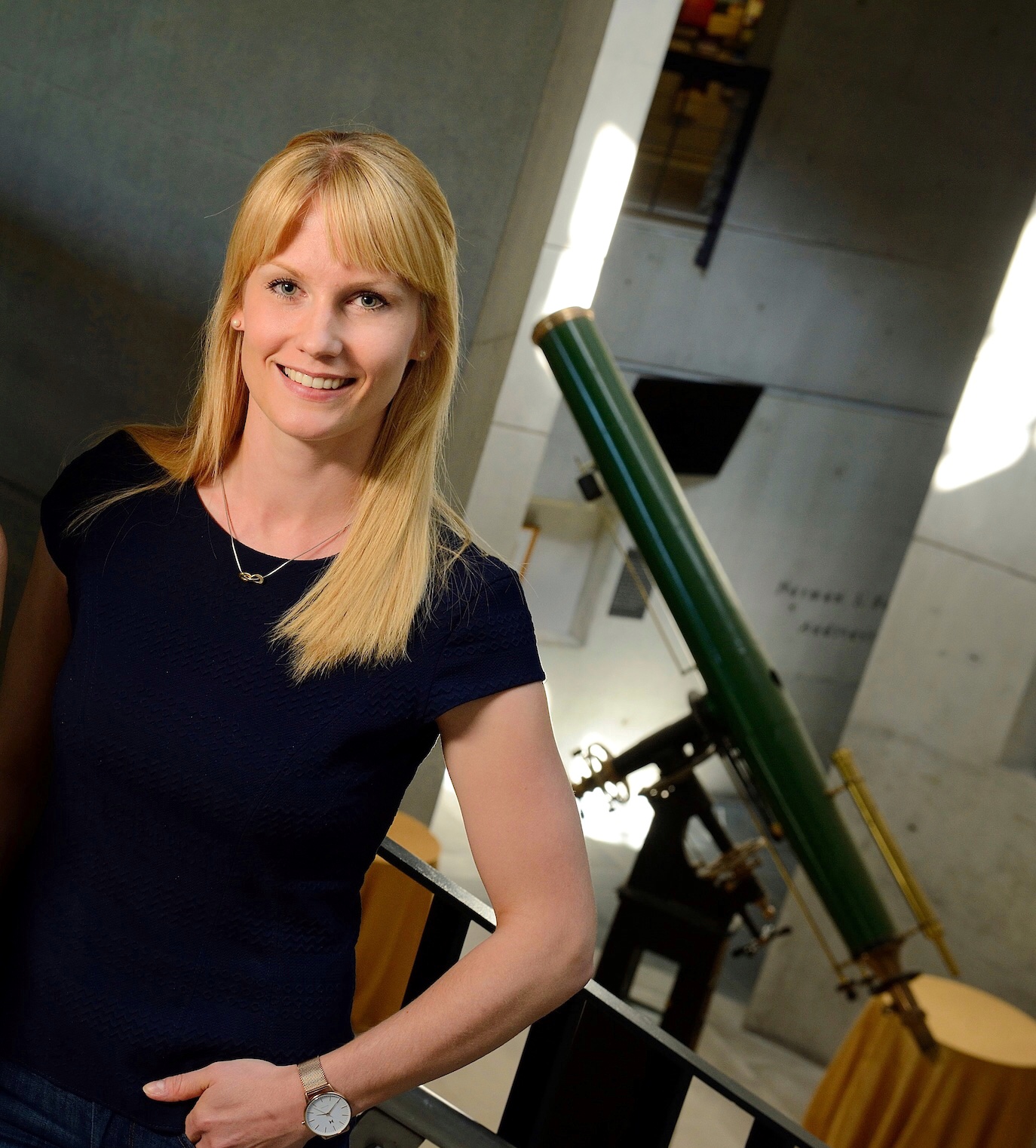 When I received an offer from ESO for a PhD position in 2011, I did not hesitate to accept it. My thesis project focused on investigating distant galaxy clusters, especially those associated with powerful, radio-loud active galactic nuclei (AGN), and I was supervised by Carlos De Breuck and Joël Vernet. Galaxy clusters are the largest gravitationally bound structures in the Universe and pushing the observations to the highest redshifts, which I did during my PhD, allows us to draw conclusions about the build-up of structure in the Universe over several billion years.
About one year into my PhD, I was given the opportunity to spend six months at the NASA Jet Propulsion Laboratory (JPL) and Caltech working with Daniel Stern, the Principal Investigator of the project. During these six months, I continued working on my primary PhD project but started to become heavily involved in other large collaborations on distant galaxy clusters. I even got the chance to assist the team with observations at the Keck Observatory and Gemini Observatory in Hawaii. Spending two full nights at 4200 m for the Gemini run was certainly quite tough but we were rewarded with great science data and amazing views from the top of the summit in the early morning hours.
After finishing my PhD degree in 2014, I accepted an offer of a postdoctoral researcher position in Nadia Zakamska’s group at the Johns Hopkins University in Baltimore, USA. In Baltimore, I shifted my research focus from studying clusters around powerful AGN to studying the AGN themselves and AGN feedback processes in detail. I am extremely fascinated that the energy output of AGN can impact the evolution of their host galaxies and the build-up of their stellar mass, even though the difference in physical size spans many orders of magnitude.
I use multi-wavelength photometric and spectral observations to address various aspects in the field of AGN feedback studies and galaxy evolution. In 2017, I moved back to ESO as a Research Fellow where I continue to work on AGN, AGN feedback processes and galaxy evolution. After having worked on this topic mainly with collaborators in the USA and South America, I am now looking forward to growing my scientific network in this field in Europe.

In my third year in Heidelberg, I started to work at the Landessternwarte Heidelberg (Heidelberg Observatory) for my bachelor thesis project on polarisation measurements of variable active galactic nuclei. I also got in touch with the extra-solar planet search group there and got the chance to lead observing runs at Lick Observatory, USA. As there is no telescope operator provided at the Coudé Auxiliary Telescope at Lick Observatory, I had to familiarise myself with the telescope, the software, the operation of the dome, the guiding system and even the maintenance of the instrument (for example, refilling liquid nitrogen at the end of the night). In the current era of remote and queue observing, I realise now that my experience at Lick was quite unusual and valuable: I was in charge on an entire telescope and spent more than a week completely alone at the top of a remote mountain! This experience helped me to develop a deep understanding of what it takes to operate and run a telescope, how much fun it is, and how important it is for an astronomer to understand where and how data are being taken. 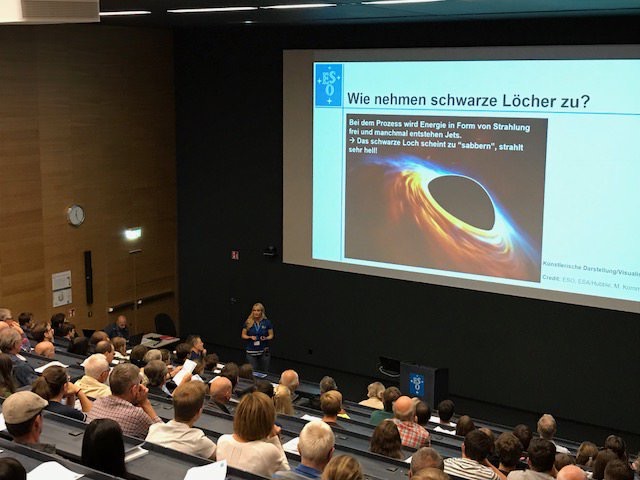 Dominika during a presentation on black holes. © Dominika Wylezalek

The Physics Department of the Johns Hopkins University shares a campus with the NASA Space Telescope Science Institute (STScI) which operates the Hubble Space Telescope, and is heavily involved in the development and management of the new James Webb Space Telescope (JWST). The proximity to STScI allowed me to work closely with instrument and telescope scientists and to become familiar with the expected capabilities of the JWST. In late 2016, I put together a team of world experts in my field to write a proposal for Early Release Science observations with the JWST to observe three high redshift AGN. The effort was rewarded and the proposal was accepted, making my team one of 13 teams worldwide that will obtain and receive some of the first data taken with the JWST. Although the launch of JWST has been rescheduled twice in the last twelve months, preparing the proposal and the observations and working with the data has been and will certainly be one of the highlights of my career.

What is a ‘day in the life’ of Dominika like?

I usually arrive at my office between 8.00 and 9.00 hrs in the morning and go down to the institute’s cafeteria to get a (free ) coffee. Back in the office, I first check my emails that came in during the night. I have many collaborators in the US and therefore receive a many emails during European night-time. I then read the newly published and posted papers in my field on the Astrophysics Arxiv. My most productive hours are usually the morning hours and I try to work on my projects as much as I can before lunch. That involves coding, analysing data of the galaxies that I am working on and writing papers and proposals. The afternoon is often packed with meetings, science talks and ‘light’ work such as answering emails, working on talk presentations or reading papers. I usually leave the office between 17.30 hrs and 18.30 hrs. Up until a few months ago, I would go to the gym two to three times a week to work out (I love spinning classes). But now, that I have a four-month old baby at home, I go home to spend time with him and my husband. I usually work out from home these days but am planning to attend my spinning classes again once he gets a bit older.

Although I understand the many components of the universe much better today than 25 years ago when I first started to wonder about its size, I am more aware than ever before how much we still do not know, and how much is still waiting to be discovered and understood. Contributing my share to this endeavour is what drives me and my research every day.

I spend most of my free time cooking, travelling, horse-back riding and hiking in the Bavarian and Austrian Alps. And more recently, playing with my four month old son.

Try to find good advisors, talk to previous students and try to assess who would be a good match to your personality and science interests. I have been extremely fortunate in having had great mentors and supervisors throughout my career so far who have been great teachers but have also helped me immensely in navigating through the science world.

I don’t know whether it will be the ‘next’ breakthrough but I hope that we’ll manage to figure out the nature of dark matter soon.

Oh wow, so many things… we need to change our culture in which girls and women are being told from an early age on (directly and indirectly) that boys are better at maths and physics, we need to work on reducing the conscious and unconscious biases of teachers and mentors who impact the interests and career choices young girls make, we need to make the scientific environment more welcoming for girls, women and families and we need more female role models for junior scientists. I could go on and on, these are just some of the things that came to my mind first.

Most of these actions are long-term but what can be done on a short-term basis is to make sure that the women who are already in academia don’t get discriminated against. A great example is the recent time-allocation review process for the Hubble Space Telescope. For more than a decade observing proposals led by female PI’s were less successful than those led by male PI’s. After introducing a double-blind review process last year in which not only are proposers were unaware of the identity of the reviewers, but also the reviewers were not made aware of the identities of investigators. For the first time, the success rates of men and women were almost identical.

We need more of such actions that try to overcome the conscious and unconscious biases in our culture.