8 Female #LiNo16 Participants that...
Back

The 66th Lindau Nobel Laureate Meeting (26 June – 1 July 2016) dedicated to the field of physics is over, but the planning of the next Lindau Meeting has already started. Here you can find several impressions of young women in physics who participated in #LiNo16.

Hopefully they will convince you to apply for next years’s 67th Lindau Nobel Laureate Meeting (dedicated to chemistry) taking place from 25 to 30 June 2017. 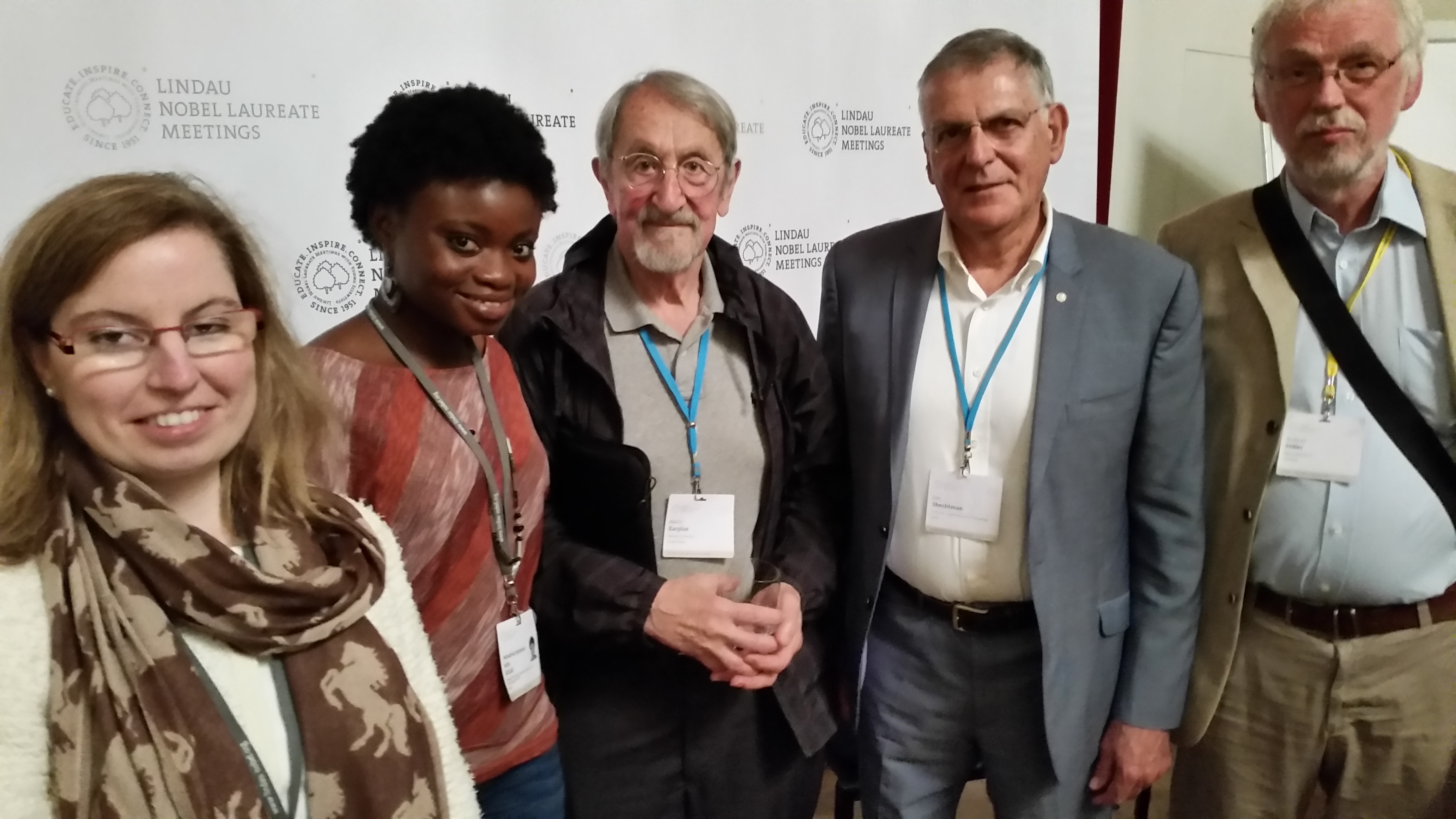 My experience at the Lindau Nobel-Laureate Meeting is one I term as an unforgettable experience. First and foremost the Lindau Nobel Laureate Meeting afforded me an opportunity to having a one-to-one interaction with Nobel Laureates I only before saw on the internet and also meeting with colleagues who are working similar or close to my research study. I loved the exposure, the atmosphere and the discussions so much. I had the opportunity to be involved in panel discussions and attended the leadership breakfast meeting which has really enlightened me in various prospects. In summary: The LNLM is a must go meeting. 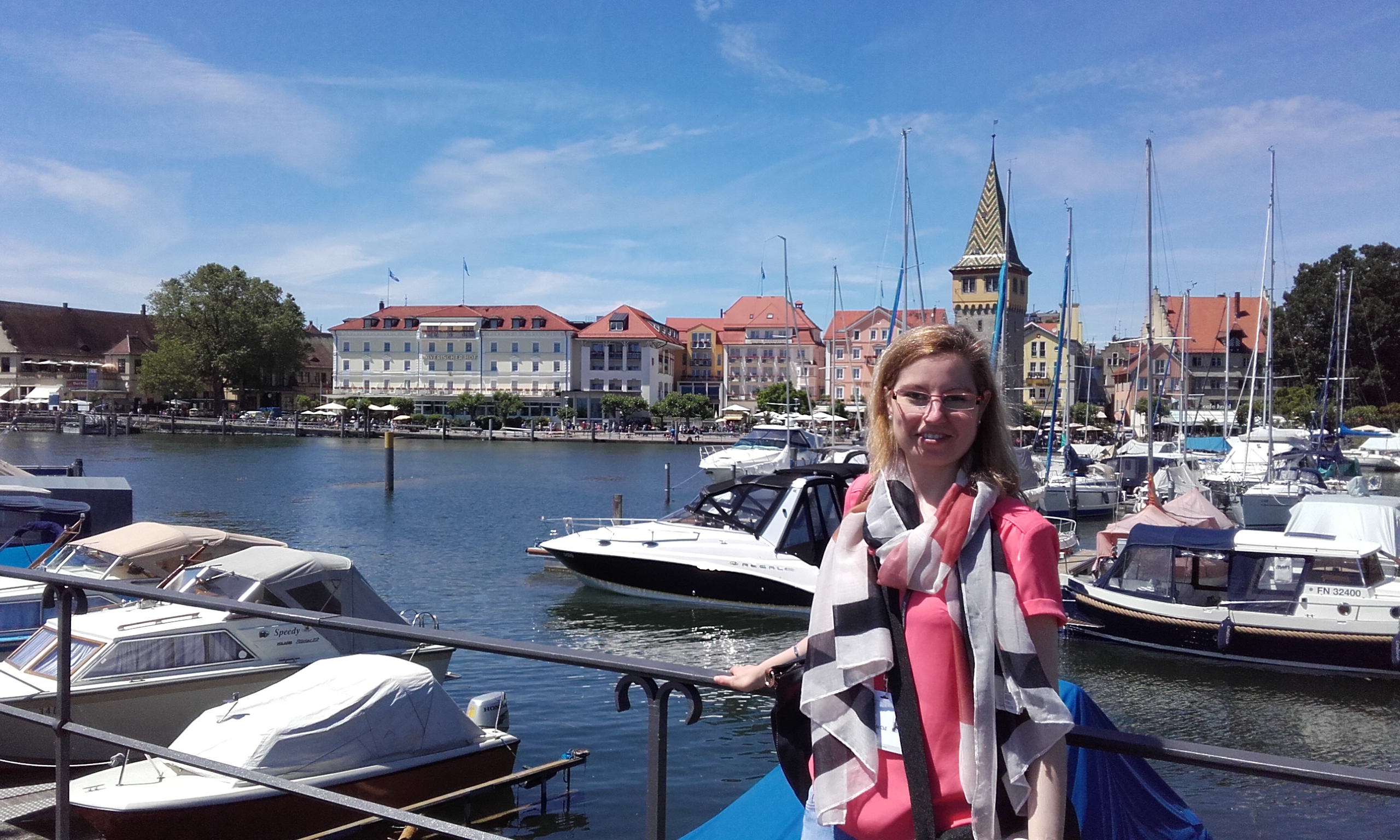 Ana at the harbor in Lindau

The 66th Lindau Nobel Laureate Meeting has been an extremely good opportunity to meet excellent scientists at all levels, ranging from Nobel Laureates to undergraduate students.

I’ve had the pleasure to meet and discuss with some of the Laureates. I’ve also had the opportunity to talk a bit with Prof. Klaus von Klitzing, who is now working at the Max Planck Institute in Stuttgart, where I have worked as a postdoctoral researcher about a year and a half ago. I also found it very inspiring to talk to Prof. Brian P. Schmidt about science leadership and to Prof. Carl E. Wieman about teaching in university.

Of course, the talks, panels and discussions with the laureates were all very interesting as they dealed with very important aspects of science, such as gender. In particular, I had a very good experience when participating in the press talk about migration and science presented by Physics World. I believe that through the exchange of experiences with the laureates in chemistry, Professors Dan Schechtman and Martin Karplus, I’ve learned a lot.

I also had the real pleasure to meet and talk not only about science, but about life itself, with many of the selected young scientists who were attending the meeting last week. I think I have made many new friends and I hope I will be able to stay in touch with them from now on.

In conclusion, attending to this Meeting has been an intense and wonderful professional and personal experience for me and that’s why I strongly encourage other women in science to apply for attending to it. 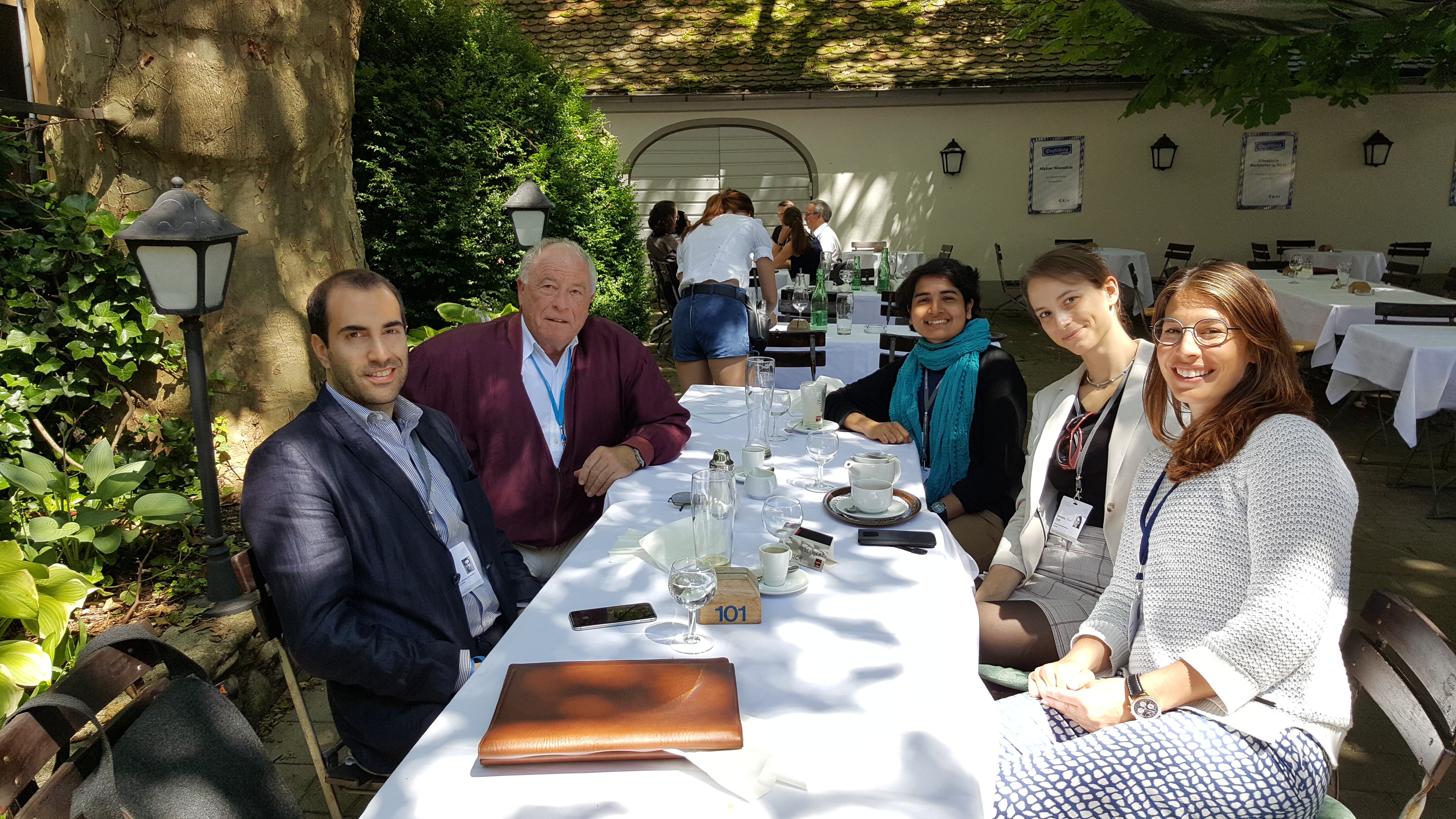 Before attending the meeting, I was excited and a little nervous, unsure as to whether I would have the confidence to speak to any Nobel Laureates – or even have the opportunity to do so. I knew that I would see some incredible lectures, and I hoped that I might meet some fellow young scientists and learn some new science.

As it turned out, the meeting vastly exceeded my expectations. From day one, everybody was so friendly and open – introducing themselves, asking about each other’s work, keen to learn and make new friends – and this led to a really warm and engaging atmosphere. We had many opportunities to speak with Nobel Laureates, in a relaxed and informal setting, which made it much less intimidating to do so, and meant that we could learn a lot from these inspiring people.

One of the great things about the meeting, that many people remarked upon, was that we had the impression that female participants were well represented. This meant that we had the opportunity to speak to many other women in science, share our experiences, and discuss how to encourage more women to go into the physical sciences.  This made us feel more welcome, and more confident in our positions as female scientists. 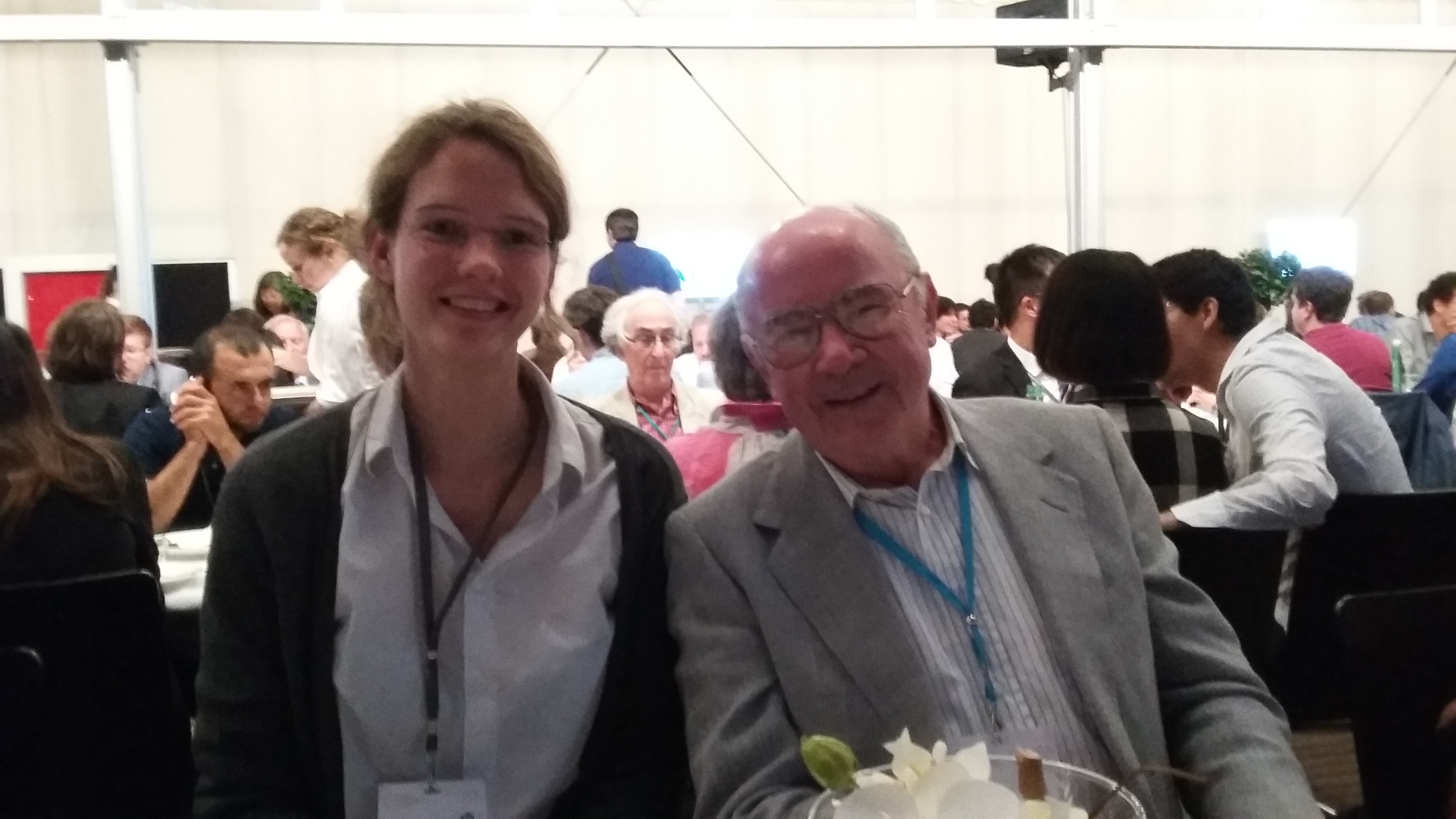 When I arrived in Lindau I knew the conference was a huge event, but it took me a week to realize that I felt like everybody could just stay another week to get to know all the participants I had not met and to talk even more to those ones I had just met. But everybody was already exhausted from the great, but full program, so that it’s good that we got a rest.

It’s hard to name one moment as the most memorable one; I guess it’s more the “Lindau spirit”, i. e., many highly motivated and interested young people and Nobel Laureates at the same place exchanging research ideas, but also general, society-concerning thoughts.

During one dinner I sat next to Johann Deisenhofer and we talked about research, the American society and many other topics. Another young researcher worked on the same setup I am going to work on, so I was happy to hear a talk from her during one of the master classes. But it also turned out that there are many parallels between different specializations, e.g. image processing in bio- and astrophysics.

I can only encourage women to apply to the Lindau Nobel Laureate Meetings as there will be many other women with the same motivations, interests and future plans. It’s very inspiring to talk to everybody and share experiences! 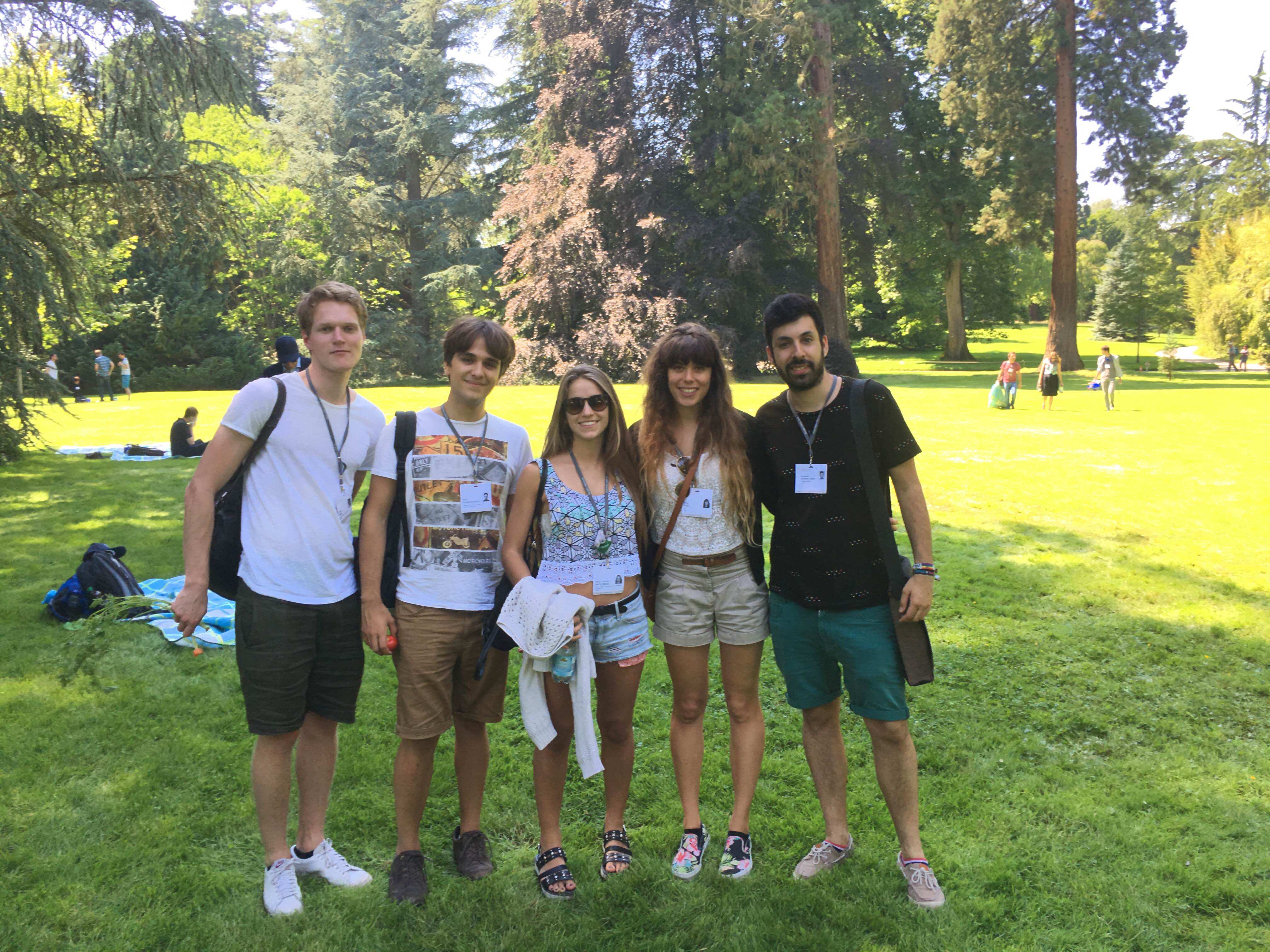 The 2016 Lindau Nobel Meeting was a  week full of knowledge, experiences,  fun moments, and inspiring people. It was great to receive tips from David Gross on being creative: be interested in more things outside physics; and dealing with frustration: work always with more than one problem at a time. Or seeing that  Kurt Würthrich used to practice high jump and that Bill Phillip’s secret to happy life is a positive attitude and finding balance in the different phases of your life.

Everyone should apply to this meeting: be ready to be “wowed”! Perhaps, because of how society shapes “our thoughts and beliefs”, there are less women in Physics: women should definitely apply. In most cultures it is difficult to find women in Physics (compared to other fields like Biology or Medicine). Events like these are inspiring and give you energy to achieve whatever you set your mind to. 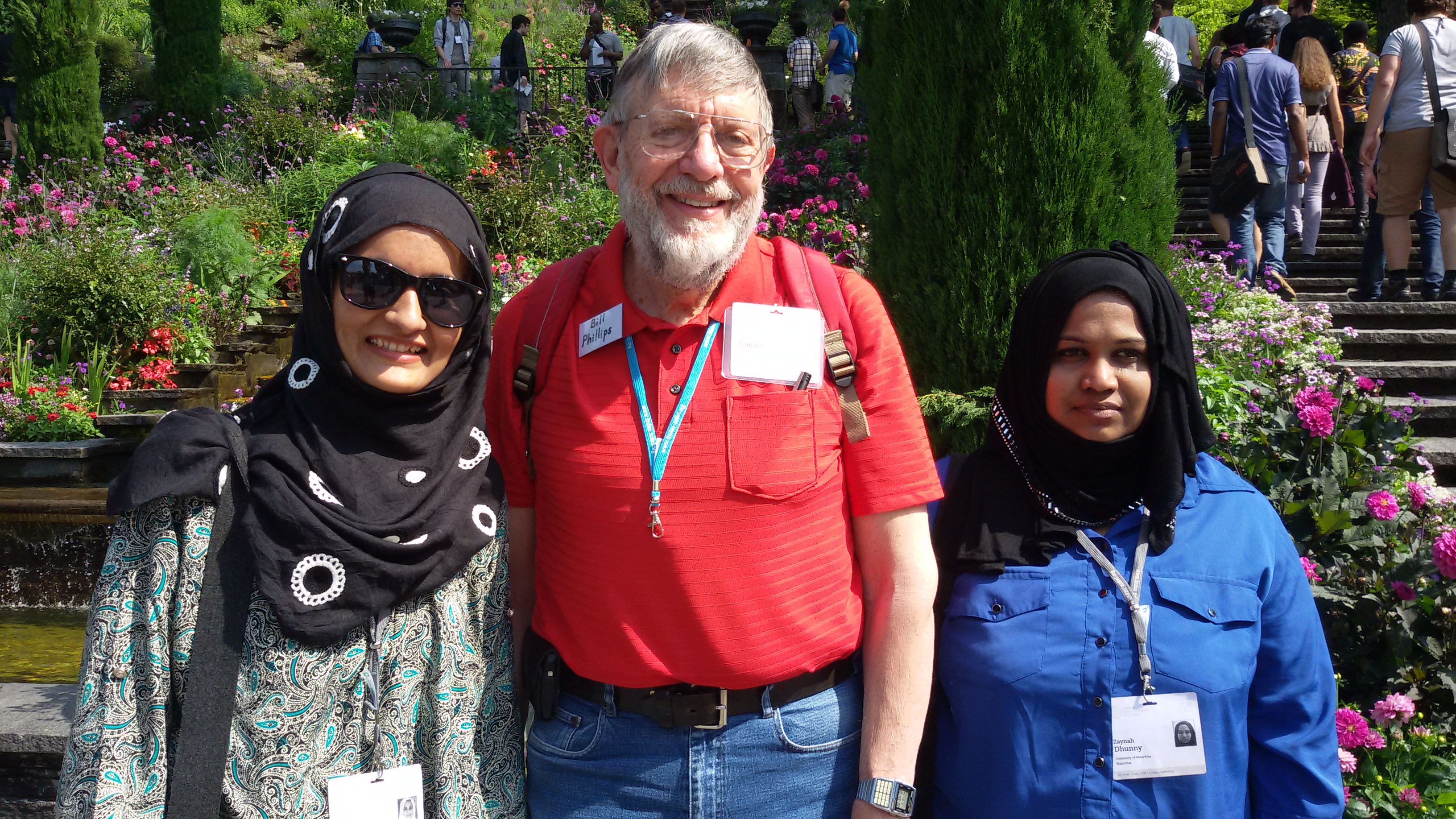 When it comes to describing my impressions of the meetings, I believe I’m now more educated, inspired and motivated by the work of Nobel Laureates and was able to make a lot of connections with other young scientists doing some exciting science.

My favorite Nobel Laureate at the meeting was William D. Phillips, in every coffee break both me and my friend were looking for him to talk. Most of the time he was already talking to some students and we just stood there and listened to him. Sometimes, we as students feel like our questions are kind of stupid and not worth asking a Nobel Laureate but I was very impressed by his behavior that no matter what type of question we asked, he always had an answer and sometimes even a quite detailed one. We just needed to stand near him and felt like a river of knowledge is flowing.

And this was not only with Prof. Phillips but I felt this with every Nobel Laureate. In general, every time I listened or talked to a Nobel Laureate it was a moment worth remembering.

The Bavarian evening was an unforgettable night obviously, so many beautiful people wearing their cultural dresses. Countess Bettina gave me a Thumbs Up for my dress which I can’t forget.

Although women do study science but not many of them get a PhD and pursue their carrier as a scientist. I think women should apply and attend these meetings if they get a chance and I would recommend all my friends and class fellows to apply for this meeting. I personally didn’t feel myself to be tooo important for science before attending this meeting. But at the meeting everyone was talking about the importance of Women in Science. I found the atmosphere so inspiring and encouraging there.

Lola with a Nobel Prize Medal in Lindau

In my daily life, I am mostly surrounded by people who work in industry, education, restoration, consulting, etc. Being a PhD student in my world is not very common. As years go by, and more people ask me THE QUESTION: “this weird thing you are doing your PhD in… what is it for?” I become more skeptic about my career and my future. Many times during these past years doing my PhD, I experienced this feeling of rarity and discouraging solitude. Having the chance to attend the 66th Lindau Nobel Laureate Meeting was the perfect medicine to fight against these thoughts. That’s why I really want to encourage you – young scientist – to apply for this event.

If you are lucky enough, you’ll have the chance to meet hundreds of people like you, who feel really passionate for what they do and look at your research with curiosity and empathy. Also, you will meet a bunch of inspiring people who won a Nobel Prize (You’ll even be able to drink some beers with them, like if they were your buddies!).

And all these things will happen during one week in a scenic city where you’ll be treated as someone kind of important. To sum it up, I can assure you that you will hardly have such an amazing opportunity like this again. Please, don’t let a little bit of paperwork stop you from enjoying it. 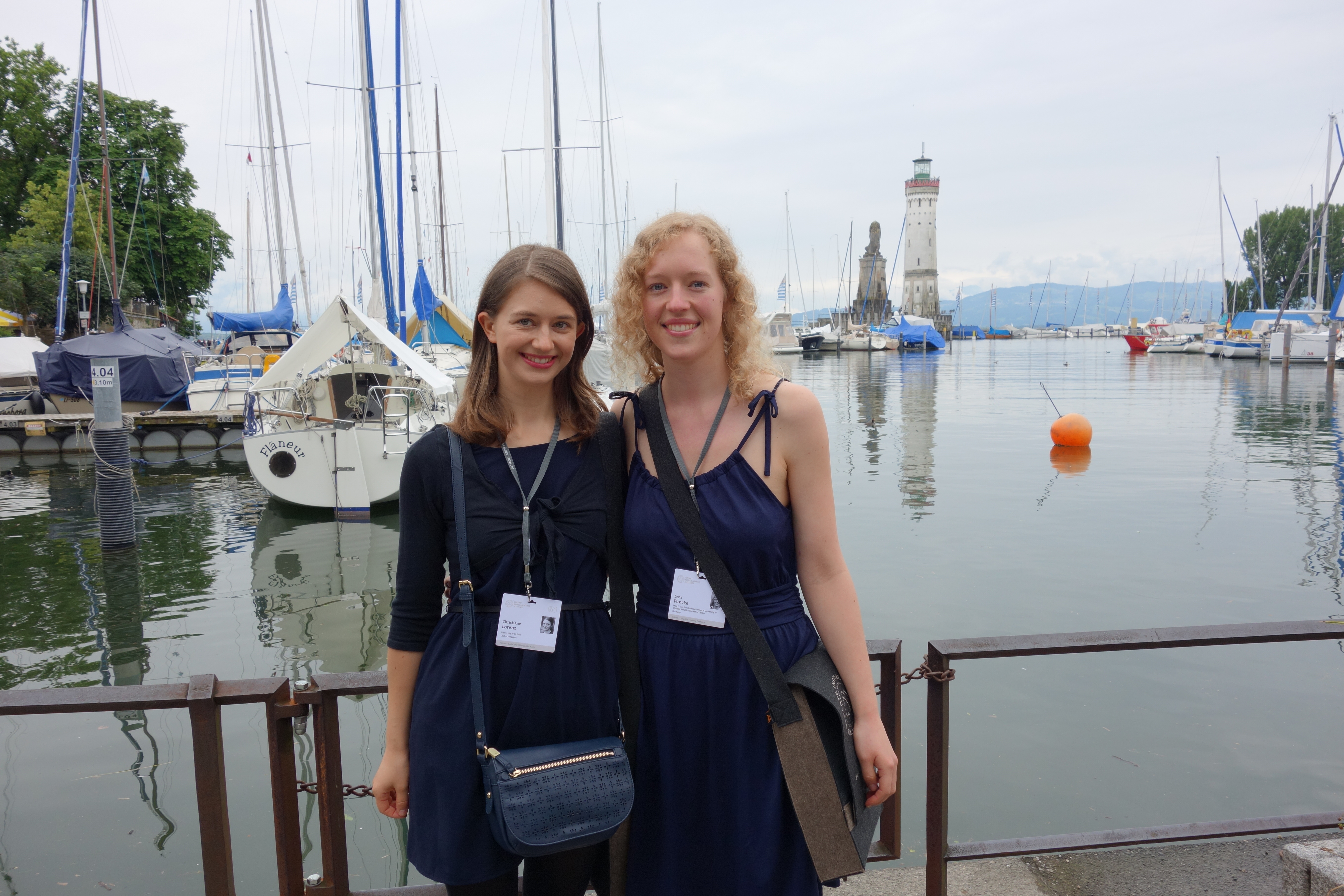 Might quantum mechanics emerge from an underlying deterministic theory and what is the physics behind soap bubbles? Which challenges are presidents of universities or large science societies faced with? What motivates the greatest minds of contemporary physics to do research?

The six days I spent in Lindau gave me an exciting insight into fundamental issues like these and many more. The lectures in the morning and the discussion sessions in the afternoon dealt with various topics ranging from physics, politics, personal anecdotes, and science education to tips for becoming a good scientist. In addition, the meeting comprised several informal events such as an international get-together in Austria, a dinner organized for the fellows of the Max Planck Society, and a boat trip to the flower island Mainau. These events gave me a platform for inspiring personal discussions with the Laureates and other young scientists.

The Lindau Nobel Laureate Meeting offers a unique possibility to informally meet some of the best researchers of our current science community. It gives you exceptional insights into specific scientific debates and into the complex development of scientific knowledge.

Apart from these general points, the meeting can also be very stimulating for your own research. For example, I was given the chance to present a poster about my own work and also approached several Nobel Laureates to discuss specific questions related to my research. The discussions with Laureates like Arthur McDonald, Brian Schmidt, and Gerardus ‘t Hooft and with other young scientists gave me new research ideas and even resulted in a new collaboration. Therefore, I strongly recommend everyone to apply for this meeting, whose guiding principle “Educate. Inspire. Connect.” hits the nail on the head!

If thoses statements are not inspiring and convincing enough to make you apply for the next Lindau Meeting, just look at the last photo of this post with the beautiful harbor of Lindau, then grab a pen to fill out the application form! 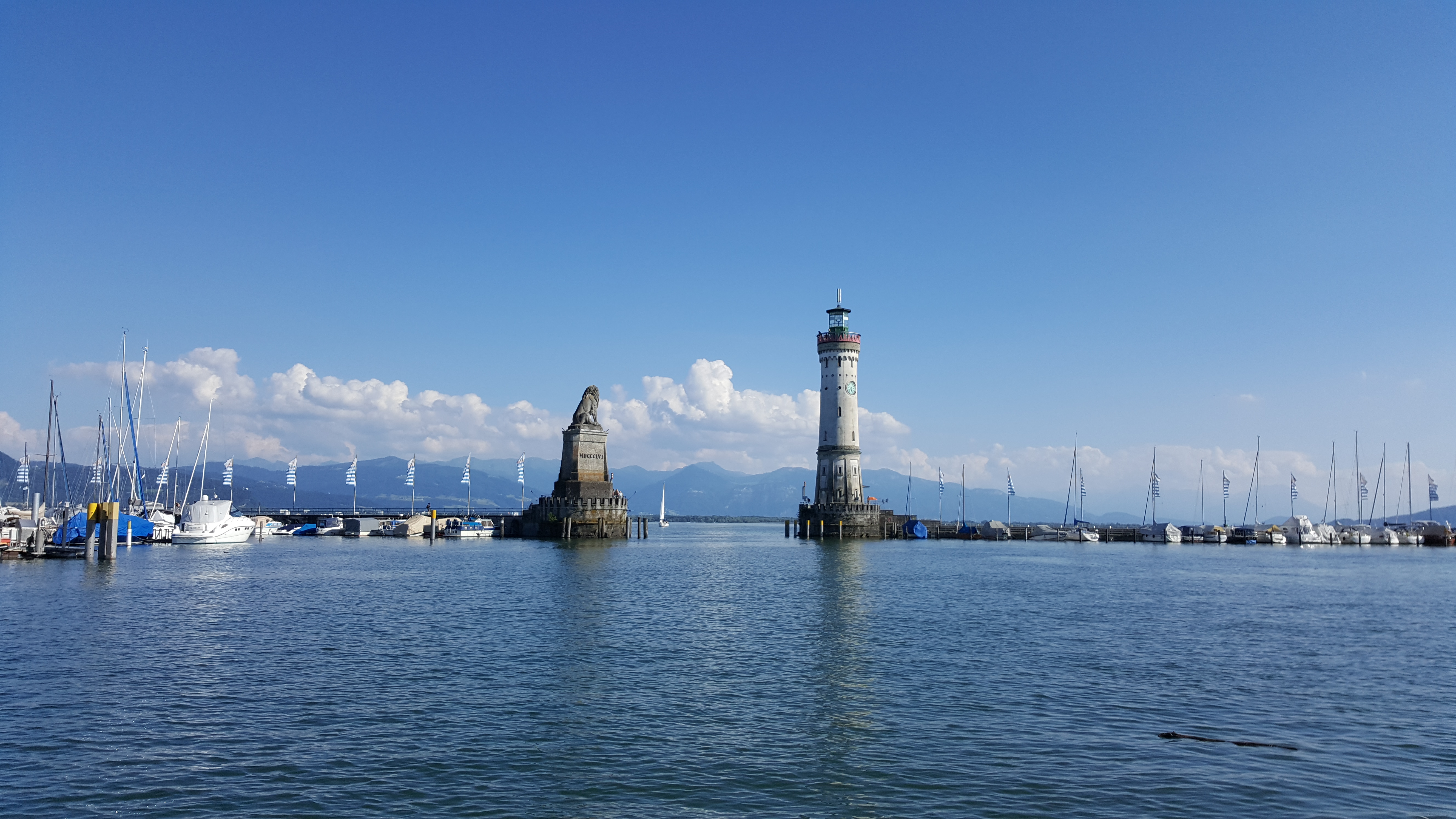