Robert Aumann: Lessons from game...
Back
By treating collectives like individuals, game theory can explain how we apportion moral blame for events such as the My Lai massacre. Treating collective groups such as countries and workplaces the same as individuals is important not just for game theory but for our view of moral responsibility, according to Nobel Laureate Robert Aumann. Presenting his lecture at the 5th Lindau Economic Meetings on 21 August, Professor Aumann gave a wide-ranging and entertaining address that touched topics from the behaviour of schools of fish to the My Lai massacre during the Vietnam War. He said that game theory traditionally saw countries, for example, as a group of individual people all with free will and only treated a country as a player because it was too unwieldy to analyse all the individual decisions. 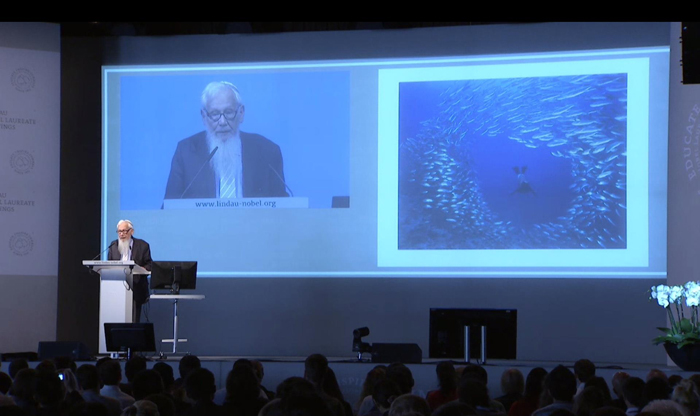 (Screenshot from the Lindau Mediatheque)

Biblical lessons However Professor Aumann insisted that collectives should in fact be seen as individual entities with their own will. He said many people already treated collectives as if they were a single unit. He flashed up an underwater picture of fish and a sea lion with a caption that explained that the school of fish was moving to escape its attacker. “This is symbolic of the idea that a collective is like an individual. We have an identification of individuals with collectives,” he said. He even dipped back in the Book of Exodus in the Bible to highlight examples from thousands of years ago Egypt and Israel were seen as individual entities that could “camp for the night”. On a more serious note, he said that while we understand that people have diseases it is also meaningful to say that collectives have diseases, such as outbreaks of crime within a country or pollution for the whole world. The individual can seek treatment, while the collective can institute a health system. When people make decisions of their own free will they are often influenced by collective will, such as when a child follows their parent to become a lawyer because they have grown up “in the context of lawyers”, for example. 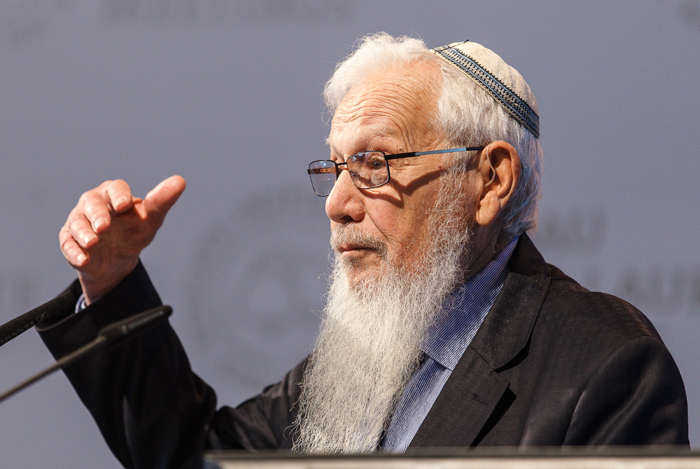 Changing moral responsibility The important point was that it raised possible – and Professor Aumann stressed the word “possible” – moral implications. On one level it allows us to make more judgements on collectives rather than their members – negatively in the case of the Ku Klux Klan but positively in the case of the Sierra Club, the grassroots US environmental organisation. He raised the ideas that there is a greater more responsibility on collectives that implies lesser responsibilities for individuals within them. He picked out the My Lai massacre in which US troops under the command of Lieutenant William Calley massacred hundreds of Vietnamese villagers. While 26 soldiers were charged with crimes, only the commander was convicted and he served a tiny proportion of his sentence. “They were acting as part of a collective. Sometime it is called the herd instinct but it is not just that – the collective is acting, not them personally.” At the same time it may mean we can take lesser moral responsibilities towards individuals that are seen as part of the collective. His poignant example was an air attack on the home of former Libyan dictator Muammar Gaddafi that killed three of his grandchildren. “What did his grandchildren have to do with it?” he asked.  “No, the grandchildren are part of the Gaddafi ‘’collective. So maybe, just maybe, we have lesser responsibility by individuals and towards individuals. This is the tough part”.   The full Video of Robert Aumann’s lecture is available at the Lindau Mediatheque: