When US academic Robert B. Wilson wanted to tell his long-time collaborator and friend Paul R. Milgrom that they had jointly been awarded the Sveriges Riksbank Prize in Economic Sciences, he only needed to cross the road they both live on in Palo Alto, California, to deliver the news. The moment at 2am in the morning (as Milgrom had turned his phones off) was captured on Milgrom’s video doorbell.

The heart-warming episode helps highlight the serious point that the two Stanford University professors have worked closely together over the last four decades on research into the designs of mathematical models that have led to major advances in auction theory and inventions of new auction formats.

In fact Wilson was Milgrom’s supervisor for his 1979 doctorate at Stanford while, incidentally, Wilson’s other PhD students have included Al Roth and Bengt Holmström, who also received the Prize in Economic Sciences in 2012 and 2016 respectively. “Bob is well established as the patriarch of a Nobel dynasty,” Roth said about Robert B. Wilson on his blog Market Design. 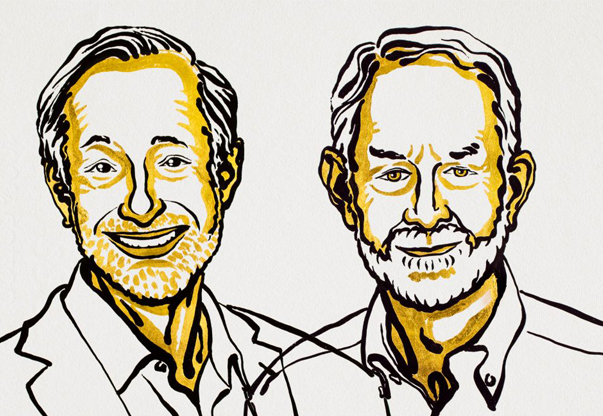 In the official announcement, the members of the Prize Committee said the pair’s insights had led to the design of new auction formats for goods and services that are difficult to sell in a traditional way, such as radio frequencies. Their discoveries have benefited sellers, buyers and taxpayers around the world, they said.

As Kevin Bryan, Assistant Professor of Strategy at the University of Toronto Rotman School of Management, explained in his blog A Fine Theorem, Wilson’s early work applied the advances of game theory in the 1970s to questions in auction design.

In particular he looked at the notion of the “winner’s curse” in an auction of a good with a “common value” – for instance, a tract of land that either has oil or does not.  Rational bidders tend to place bids below their own best estimate of the common value for fear of suffering from the winner’s curse of paying too much and losing out. “Wilson not only applied these new game theoretic tools, but also developed many of them,” Bryan writes.

Milgrom formulated a more general theory of auctions that allows both common values as well as private values that vary from bidder to bidder. He analysed the bidding strategies in a number of well-known auction formats, demonstrating that a format will give the seller higher expected revenue when bidders learn more about each other’s estimated values during bidding.

From Paper to Real Life

This translation from peer-reviewed paper to real life application made the headlines in 1994 when the US Federal Communications Commission (FCC) replaced “beauty contests” between bidders with an auction of mobile phone frequencies based on a model developed by Wilson and Milgrom along with Preston McAfee.

Milgrom and Wilson invented a new auction format, called the simultaneous multiple round auction. In these auctions, all biddable items are offered simultaneously, and bidders can bid on any portion of the items. The bids start low, in order to avoid the winner’s curse, and the auction ends when no bids are placed in a round.

Since then the FCC has raised almost US$121 billion for taxpayers between 1994 and 2014 from 101 spectrum auctions. It has been estimated that other countries have raised a further US$80 billion from similar auctions.

Their innovations have since extended to the sale of allocations within electricity, gas, and environmental markets. “This year’s Laureates in Economic Sciences started out with fundamental theory and later used their results in practical applications, which have spread globally,” said Peter Fredriksson, chair of the Prize Committee. “Their discoveries are of great benefit to society.”

Bryan added: “Since auctions today are used to allocate everything from the right to extract water to carbon emissions permits at the heart of global climate change policy, ensuring we get their design right is not just a minor theoretical concern.”

Stanford President Marc Tessier-Lavigne, paying tribute to the pair on behalf of the university, said: “Their insights into bidding and pricing have become integral to our modern economy. Their work is a shining example of the ways in which both fundamental discovery and its application to practical solutions make enormous contributions to modern society. All of us at Stanford are tremendously proud of their accomplishments.”

Rudolf Müller, Professor in Quantitative Infonomics and Scientific Director of the Business Intelligence and Smart Services (BISS) institute at Maastricht University in the Netherlands, said after the announcement his reaction was happiness for Milgrom as he had co-organised workshops with him in the past.

“With their work on spectrum auctions in the nineties, Paul R. Milgrom and Robert B. Wilson have been instrumental in bringing very complex auction formats into practice,” Müller said. “By complex, I mean not only complex in terms of the rules for the bidders, but also in terms of the algorithmic complexity involved in determining the winners and the prices they have to pay.”

Paul R. Milgrom is the Shirley and Leonard Ely Jr. Professor of Humanities and Sciences at Stanford University. He was born 1948 in Detroit, Michigan, USA. He received his PhD in Business 1979 from Stanford University. He is also chairman and co-founder of Auctionomics, which designs and assists bidders in high-stakes auctions.

Robert B. Wilson is the Adams Distinguished Professor of Management, Emeritus, at Stanford University. He was born 1937 in Geneva, Nebraska, USA. He received his DBA in 1963 from Harvard University. In 2018, he was awarded the John J. Carty Award for the Advancement of Science.