Oliver Smithies: The Origin of...
Back
Professor Oliver Smithies (Nobel Prize in Physiology, 2007) shared the different sources of his ideas in research – good teachers, childhood memories, and overcoming fear. Prof. Oliver Smithies (89), in his inspiring lecture that got him a standing ovation by other Laureates and young scientists, shared where his ideas in research came from. He received the Nobel Prize in 2007 for his work on ES cells, but he has made another fundamental contribution to biochemistry – introducing starch gel as a medium for electrophoresis. He mentioned, “I remembered helping my mother do laundry. She cooked starch, and then applied it to my father’s shirt’s collars to clean them – it was a slimy gel-like liquid. That idea led me to propose starch gel as an electrophoresis medium.” He also shared that his student Ed Southern (the one who designed the Southern blot with Smithies) had the idea of detecting DNA in a sequence through his memories of mimeograph (a machine that forces ink on paper through a stencil). Similarly, he mentioned that Kary Mullis (Nobel Prize in Chemistry, 1993, for inventing Polymerase Chain Reaction (PCR)) had the idea of a PCR as he was driving and “multiplying every consecutive number by 2 – 1, 2, 4, 8, 16, 32, 64, 128…”. “Very often ideas for research comes from our experiences or memories – it takes only one moment for the idea to occur, but it takes a lifetime sometimes to show that it works”, he summarized. 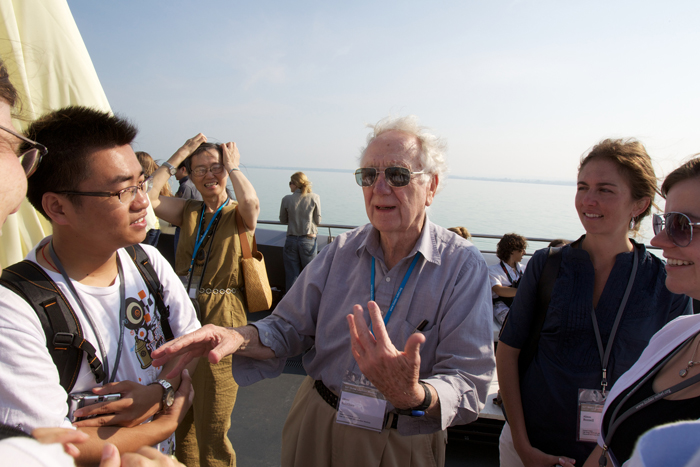 He credited his teacher with developing an analytical attitude as he said “My teachers always forced me to think.” He also acknowledged his graduate advisor Sandy Ogston at Oxford to force him to think and analyze rather than just read the journal articles. “I still go to the lab every day, even on weekends”, he said as he showed the snapshot of his lab notebook dated the week before the Lindau meeting. He shared snapshots of his notebooks all the way back from 1963, treading us through the story of his scientific life and inducing excitement and inspiration in over 600 young researchers attending the Lindau meeting. Last but not the least, he shared how his experience as a glider has often inspired ideas. “When I started flying, my shirt used to get drenched with sweat. It is very common among anyone who starts to fly. Similarly, when I was teaching someone to fly, he sweated profusely, but few days after he started to fly without my help, he came to me, and pointing at his shirt, said -“Look Oliver, dry!” This is not a lesson in flying, but a lesson in science – that you have to overcome your fear to reach new heights.”, thus ended his lecture to standing ovation. Here you can watch the full video of Oliver Smithie’s lecture “Where do ideas come from?” from our Mediatheque: He also shared his thoughts about the culture of science in an exclusive interview: Mohit Kumar Jolly: In addition to the ‘overcoming fear’ lesson from your flying experience, any other lessons you gained from flying? Oliver Smithies: Of course. I have a glider, and I turn off the engine at some altitude, and then the glider needs upwards thrust to maintain itself. I often spot a hawk then, and start to fly in the direction it is flying, because it [the hawk] is also looking for the upward thrust, so if I follow it, I’ll also get the thrust. So, my flying experience also makes me think.   MKJ: You have been in science for a very long time. How, in your opinion, has the culture of science changed over time? OS: Not much actually. Scientists then as well as now want to be known as ‘the first one to do something’. When Galileo discovered Jupiter’s moon, he was worried about the same, and even today, scientists are afraid of the same.   MKJ: But today, hasn’t the scientific misconduct gone up significantly? OS: Yes. But it must be understood that scientists are not different from other communities – of course, you’ll find many dishonest scientists. 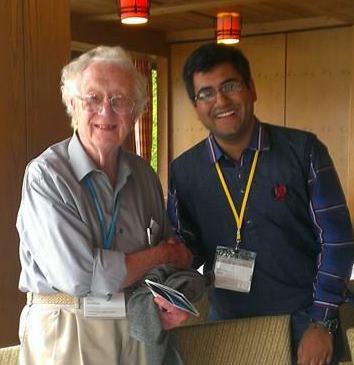 MKJ: Science is done by taxpayer’s money. Do you agree that more dialogue between science and the public is needed to prevent anti-science movements we have seen earlier, probably due to lack of proper communication? OS: That’s very much required. I haven’t done as much in this aspect as I should have done, but I’d like to share one anecdote. When we were doing experiments on cloning genes, the community in Cambridge (Massachusetts) revolted against our plan, due to various fears associated with cloning. But, in Wisconsin, we invited the media and explained to them in detail what exact experiments we were planning, and also listening to their misinformed fears and clarifying them – they finally allowed us happily to do those experiments.   MKJ: What’s your opinion of Professor Randy Schekman’s attack on the three big journals – Science, Nature, Cell? OS: I used to publish in Nature and Science, because they were quick. Later, once I had two post-docs working on two genes connected to anti-inflammatory drugs. I wrote to the editor of Cell, whom I knew, and asked her to publish them as two papers, because I wanted to be fair to both of my post-docs. When she refused, I told her that I’d not publish with Cell; and then they agreed…so they did listen to some authors. But, I believe that what matters more is not where you publish, but what you publish. A good scientist is a global citizen, and I support open Access and sharing of ideas.

A good scientist is a global citizen, and I support open Access and sharing of ideas.

MKJ: How has your experience been at Lindau? OS: I love to come to Lindau to listen to others about what makes them excited. Also,I look forward to interacting with young scientists and sharing ideas.   MKJ: What message you’d like to give to the young scientists? OS: Find something that you enjoy doing, and then pursue it. It need not be science, but must be something that excites you.