Cellular reprogramming: Still scraping the...
Back
The concept of reprogramming raises questions about how stable the identity of a particular cell is. Sir Martin Evans received the Nobel Prize in Physiology or Medicine in 2007 for his seminal work on culturing embryonic stem (ES) cells. He is also considered to be an expert on cellular reprogramming, the work that got the fastest Nobel Prize – just five years ago. At the Lindau 2014 meeting, he shares his excitement about the potential applications of reprogramming – 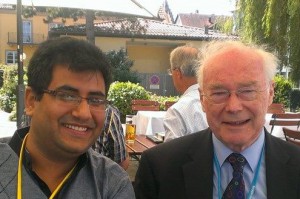 My selfie with Sir Martin Evans

MKJ: You appear super-excited about the concept of cellular reprogramming and its applications in medicine. Can you explain why? Evans: For two reasons. Firstly, it challenges what we have been believed in for so long that cells can only follow one path – differentiate from being stem cells (say, embryonic or adult) to more differentiated ones (say, nerve cells, heart cells etc.). We now know that they can revert back from being differentiated cells to be stem cells. This is a fundamentally novel concept. We can now confidently say that each state of a cell is not stable, but ‘meta-stable’. Secondly, I believe that this paradigm opens many therapeutic avenues. For example, soon in the future, one can take patient’s own cells from an organ and reprogram them to being cells of some other organ which he/she needs to recover from an injury/disease. Shouldn’t one in future have the option to choose what kind of cells are injected to cure certain diseases? (Laughs) Of course, Shinya Yamanaka (Nobel Laureate 2012 for demonstrating cellular reprogramming) and others could reprogram differentiated cells to embryonic stem (ES) cells because we already knew by then what conditions are good for ES cells to be grown in (Smiles). MKJ: This concept of reprogramming raises questions about how stable the identity of a particular cell is. So, why don’t cells keep on randomly changing their identity, for example, a heart cell becomes a neuron or vice-versa. What prevents this? Evans: That’s a very good question, and I believe we still have to find out an exact answer to that. My guess is that since reprogramming is so inefficient, maybe there is some of it going on as we speak, but it’s too weak to have our eyes replaced with teeth or vice-versa (Laughs). There are other factors too that might be playing a role in ‘defining’ the identity of a cell – for example, the niche (environment) around a cell, or the epigenetic marks. The body is well-designed to prevent itself from such chaos. MKJ: You’ve worked on teratocarcinomas, one of the most horrendous tumors that show many different types of cells in the same place. Do you also see cancer as a ‘reprogramming’ process? Evans: That’s an intriguing parallel you draw, and I certainly agree with it to some extent. We all know now that cancer cells are normal cells having lost some controls/checks that normally prevent them from it becoming cancer. We have also seen that some tumors start to produce their own hormones which their normal counterparts do not; so, it can be called reprogramming. MKJ: Reprogramming has also been in news notoriously recently, when the two Nature papers that showed that differentiated cells can be reprogrammed to ES cells by giving acid-shock were retracted. What’s your take on that? Evans: Oh, they’ve been retracted. They must have been. I was surprised why Nature accepted those papers. The data in that paper did not seem to indicate what it was meant to. It looked weird. We’re not very sure whether it was deliberate fraud or over-enthusiastic misinterpretation; but clearly the editorial process was very questionable – the peer-review was not good enough. 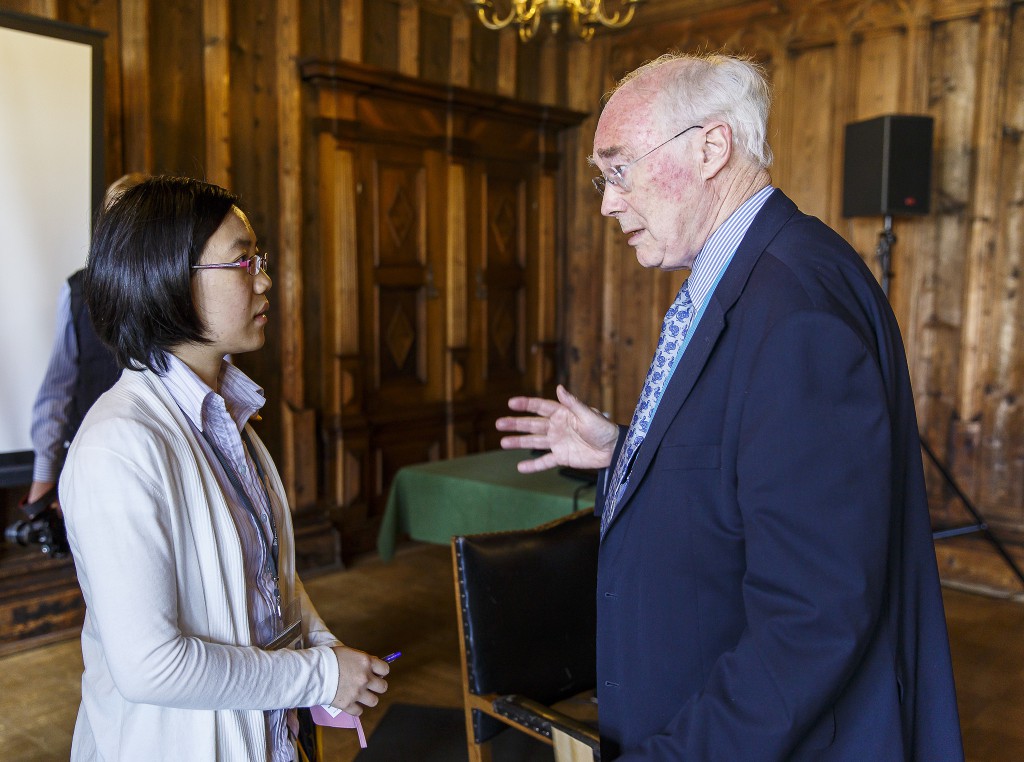 MKJ: Switching gears, let’s talk about your experience at Lindau. You got the Nobel in 2007, and in 7 years, this is the third time you have come to Lindau. What brings you here? Evans: I was invited to Lindau for the first time during the Nobel Week, and my friends told me that I must go to the Lindau meeting. When I came here, I realized they were correct. Of course, Lindau is a beautiful location. But, more importantly, I get the chance to meet other Nobel Laureates too and learn about their work, and interact with young scientists all over the world. Exciting young researchers about science has been an integral part of my entire academic career. Also, I’m strong a advocate of the fact that science is an intellectual discipline, which should not be seen as divided into physics, chemistry etc. When I used to teach at university, my students would come and ask me what should they read up to get good grades in the exam – you see they have been through the schooling system which tells them to learn about certain modules one night before the exam and forget the next day. But, I don’t believe this is science –so I always used to disappoint my students by saying that – “you need to understand the subject” (Laughs). MKJ: So, what is your advice to today’s generation in science, who you think is not trying hard enough to understand it, rather happy and busy to just learn some techniques? Evans: You should not believe in all what you read. Learn to interpret independently. This advice becomes much more necessary in today’s world of social media and internet, which is overloaded with information, some of which can be very very misleading. Everyone got excited about the stem cells generated by acid treatment, how many of you actually interpreted their data? So, be careful! MKJ:  Any final message you’d like to give to young scientists? Evans: I rate science as a better understanding of the fundamental principles of life and nature. I can understand why scientists often tend to work towards application-oriented science, but I believe we’ve many basic science questions to understand even today. Also, I hope that in the race to implement stem-cell based therapies, not many lives are lost; because that’s the huge advantage that stem-cell therapy offers – it can offer personalized medicine a big boost. As I said earlier, taking cells from the same patient who needs to be cured. But, I think neither mine nor your generation would live long enough to see the full potential of stem-cell therapy – we’re still scraping the surface. MKJ: Thank you very much Sir Evans for your time. Evans: Thank you!