South Africa is a force to be reckoned with – this seemingly small nation with a population of almost 56 million, 26 public universities and 11 official languages packs a mighty punch when it comes to science. There are multiple research institutes, a thriving research community and passionate emerging and established scholars, who are eagerly contributing to national, continental, international and world interests.

The Lindau Nobel Laureate Meetings have an exciting partnership with this country. South African Young Scientists regularly attend the annual conference, and for the last few years, South Africa has had a significant presence here, as its representatives promote the brilliance and creativity of its scientific community. And now this alliance has reached an especially thrilling moment: in 2019, South Africa will be the host of the International Day of the 69th Lindau Nobel Laureate Meeting (Physics).

Planning is already underway for this event, which will undoubtedly prove to be a spectacular affair, and even though South Africa’s many representatives at this year’s Lindau Meeting were quite busy with all the preparations, I was truly appreciative when Professor Roseanne Diab, Executive Officer of the Academy of Science of South Africa (ASSAf) and an environmental scientist, found time to sit down with me at #LINO18 and talk about why her great country is poised for even more greatness. The following is our interview, edited lightly for space and clarity.

What is ASSAf doing and how is it advancing the needs of science in South Africa?

Can you give us some background on the Academy?

We are membership based – members are elected by their peers who are existing members. We have been established in 1996, which was an important year in South Africa in terms of our history, because in the past, there were science academies that attracted only certain sections of the population. It was only decided after democracy was established that there was a need for one academy that represented us all. 1994 was the establishment of our democracy, and we were established in 1996 to represent South Africa in the international arena.

What are some of the activities of ASSAf?

We do a lot of science awareness, just as many other academies in the developing world do because this is important. We publish a magazine, do outreach programmes, have an honorific function to give out awards and prizes, and we promote international networking. 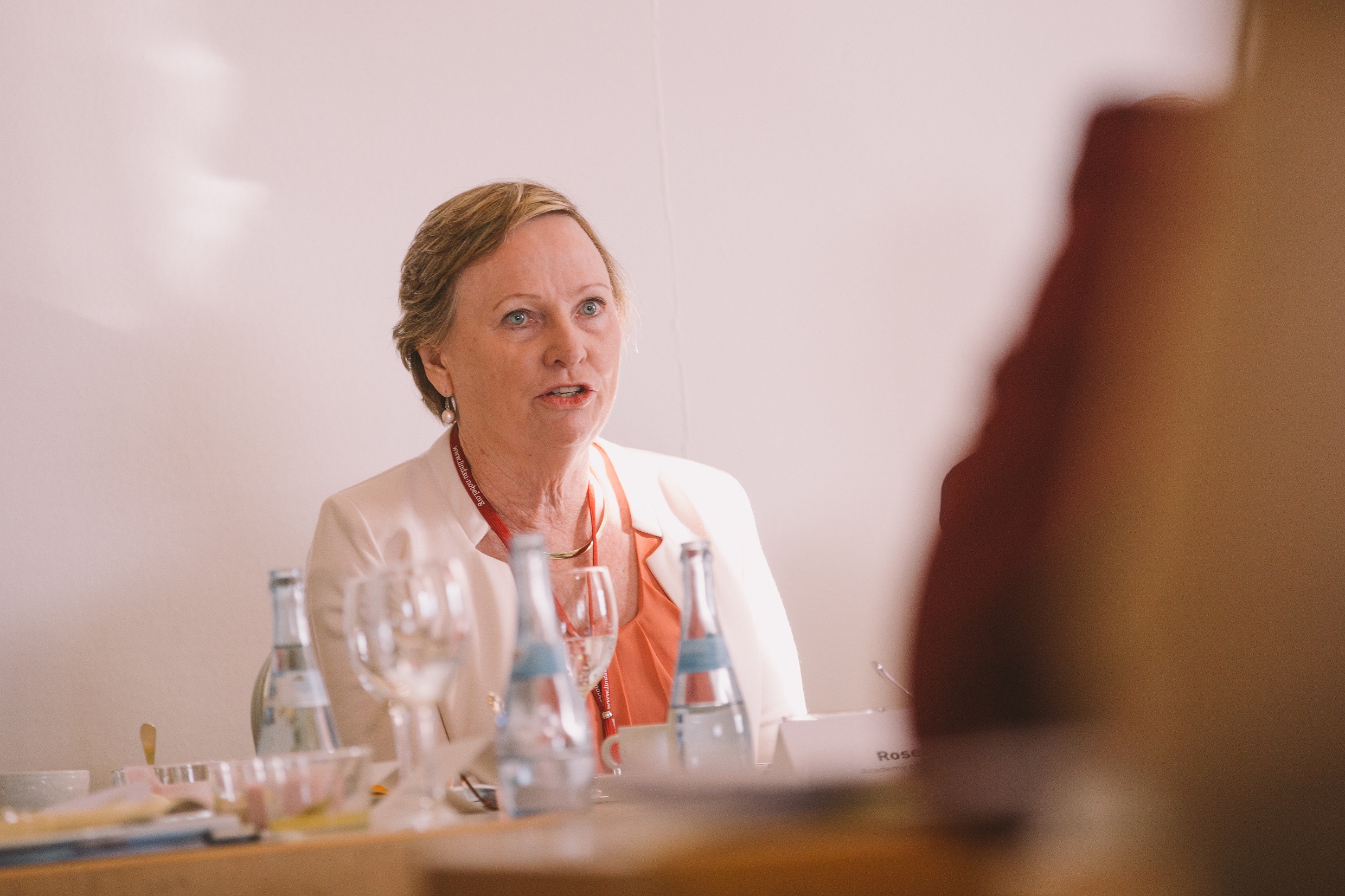 Why is this exciting to you?

It’s my 10th year with ASSAf, and it’s been the most wonderful part of my career, having been an academic my whole life and suddenly having the opportunity to shape science at a national level and see its relevance to policy. I have enjoyed helping to create that policy awareness of researchers, and the international networking that has come with this position has been quite significant. We have put a lot of efforts into building our international networks, in Africa and in countries around the world.

What are some of the networks that ASSAf is involved in?

The academy is like one big family. We are part of the the InterAcademy Partnership (IAP), which was formally launched in South Africa in March 2016, bringing together three established networks of academies of science, medicine and engineering, namely IAP, the global network of science academies, the InterAcademy Medical Panel (IAMP) and the InterAcademy Council (IAC). These networks do work at a global level, where they identify important topics, and they have the opportunity to recommend our own scientist to assist and contribute. We have been very interactive in the execution of the IAP. We are also active in the academy of medical academies. Here is an opportunity again to network our top scientists and get them involved in statements and studies they can undertake. Another network – G8 plus 5, now called G20 – has an annual statement which is part of the meeting with the heads of state. We are also involved in the network of African science academies based in Nairobi. Our president has been the chair of that network. There are opportunities for us to collaborate with other African academies on studies, hosting workshops, publishing and interacting with policy makers. The African policy makers get together for an annual meeting which is very important because the issues we face are so common to all of us.

What are the challenges facing ASSAf?

Science is funded by the federal Department of Science and Technology and 70% of our academy’s funding comes from them. We raise money and write proposals for individual projects. We are grateful for the funding we receive from the government, but it comes with stringent rules. The funding is not at the level we would like given the roles and responsibilities we undertake. Another challenge is the recognition in the national space. We have excellent relationships with the Department; they invite us to contract to take on studies, but we have a far lower profile with other government departments. Some don’t even know we exist. That is a challenge. So, our profile is not like we would like it to be. There would be opportunities to do a lot more work for the government if they were aware of our capabilities. Another challenge is our transformation. We come from a history of apartheid and it is under that when the early elections for our academy took place. It was a predominantly white racial group and it’s quite difficult to change that profile going forward. It’s going to take time, and there is also a numbers issue, the number of black and white scientists is growing, but to change the proportions we have to have much more black membership. We currently have 27% black members which does not reflect the demographics of the nation. Regarding gender, compared to other academies, we are probably ranked in the top 10 but it is still only 24-25 % women. So, these are the things we have to be mindful of and strive to change if we are to remain relevant in our context. We currently have 540 members and approximately 40 are elected each year.

What are the challenges and opportunities for South African science and scientists?

What one has to be careful of in a developing nation is that you focus all your funding on the applied sciences. There is government funding for basic science and we cannot lose sight of keeping the funding alive for basic funding. We have research strengths in biodiversity, structural biology, science communications, infectious diseases such as HIV and TB (we have a huge amount of international funding for this). We are also known for astronomy – we have this vast area in the centre of the continent with clear skies, no rain, no pollution, which is absolutely ideal for astronomy. We are also known for mining and deep geology, oceanography, marine sciences, especially since we have the meeting of the Atlantic and Indian Oceans here, which provides a unique opportunity for these types of studies.

Our biggest initiatives are the establishment of centres of excellence – fully funded centres within universities, containing a critical mass of researchers. There are ten across the country addressing really important issues, such as our HIV centre which is linked internationally with Columbia University. We also have a biodiversity Institute at Pretoria that focuses on the health of trees for the forestry industry.  We have another critical centre on palaeoanthropology based at Wits University and one on invasive plants at Stellenbosch University.

What else do you want the world to know about the South African Science community?

Why is it important to be at the Lindau Meeting?

It is important to the academy because we have a very strong mission to promote young scientists – they are the future of our country, so we have to get involved in activities that involve and promote them. Lindau opens doors for these young scientists. We have a strong presence here because South African scientists have been nominated for these meetings even before our academy became an academic partner. They came here as individuals and never fed back into the system. The gamechanger for us is to bring the young scientists here as a group and to make sure we use every opportunity to network them. We do the networking on their behalf – we set up meetings, dinners and lunches with laureates which they wouldn’t be able to do on their own. Another important thing is that we don’t think of the Lindau Meeting as a one-off event. We have a pre-event for our young scientists and prepare them in this two-day meeting to coach them so that they know what to expect, and we even bring in some alumni. They get so motivated and geared up for the Lindau Meeting. At this same pre-meeting, we incorporate outreach activities. We stress that it’s not just about you as an individual – you are an ambassador for the country, and you are giving back to the nation. This year, they went to a local school in a very poor area and talked about why its important to study science. And then we try to keep the alumni networking! Just networking is so important; it’s a confidence booster. It comes through all the time in these meetings. We tell them not to be afraid to go up to the laureates and talk to them, and the young scientists are happy to do so – something they never would have done before.

Can you give us a teaser for what we can expect next year when South Africa hosts the International Day at the 69th Lindau Nobel Laureate Meeting?

We have very exciting plans. People will definitely know it is a South African International Day and Get-Together right from the music and the décor to the dancing, and we have lots of plans to make sure that you go away with a South African flavour.

What’s the best part of your job?

The freedom to initiate things and shape national science. And to see the impacts of the work that we do.

What do you hope your legacy will be in the academy and nation?

Under my leadership, the academy has grown and matured. I hope we can maintain that excitement. I would like to think that we have started to build a reputation in good work in support of policy development. What we need to do now is to spread it across the nation and let the government know that they can depend on us for advice in many, many areas.

What does it mean to you to be a global science diplomat?

It is very exciting. I think of it in a networking way. I don’t always think of myself as a scientific diplomat, but I recognise that a very big part of what I do is networking. Our presence is very important in these kinds of meetings.