What does your packing checklist look like as you prepare for the 69th Lindau Nobel Laureate Meeting? Mine includes the following items:

That’s right – along with all of my garb and gadgets that I am schlepping to Germany, I am also building and bringing a strategy to use Twitter in the most efficient manner possible. Twitter is a terrific mechanism for networking, actively participating in and contributing to meetings, and appropriate self-promotion. At this point in history, I really believe that engaging with Twitter before, during, and even after a meeting is a necessity – it gives you access to decision-makers, helps you better assess the health and growth of your discipline, and allows you to honourably promote yourself and your work. Indeed, this social media platform serves as a useful tool to find and solidify relationships with potential collaborators and even future employers, and it is also a great chance to showcase that you are an active member of your community of physics at large, and your subfield specifically.

But of course, before you jump on Twitter and start #hashtaggingyourself #LikeCrazy, it is useful to consider a few strategies and tactics. Let’s help you both get the most out of Lindau (and any other meeting in which you are interested).

Tweeting Before the Meeting

Create a Twitter profile. Information you may want to include in your profile could consist of your name, institution, field, where you are in your career (for example, PhD student, Postdoc, etc.), and what subfields you are interested in. You could also include certain accomplishments or credentials (such as “@MSCActions Fellow”), or personal information about your outside interests (“runner, cupcake eater, Converse collector”). I would also absolutely include your Lindau affiliation: “#LINO19 young scientist”.

Learn the written and unwritten rules of what should and should not be tweeted. For example, don’t tweet a private conversation that you happen to overhear. Don’t tweet individual photos of people without their permission (see below for rules regarding speakers and formal presentations). Don’t tweet negative or disparaging remarks or opinions about the event or the people attending. Be respectful.

Familiarise yourself with how privacy works on Twitter. I suggest starting off by making your profile public and your tweets public, so everyone can see what you are doing at this special meeting. But if you have concerns regarding personal safety or professional development (i.e. your supervisor doesn’t approve of you engaging in social media), consider using certain privacy functions, or creating a profile that is strategically anonymous. 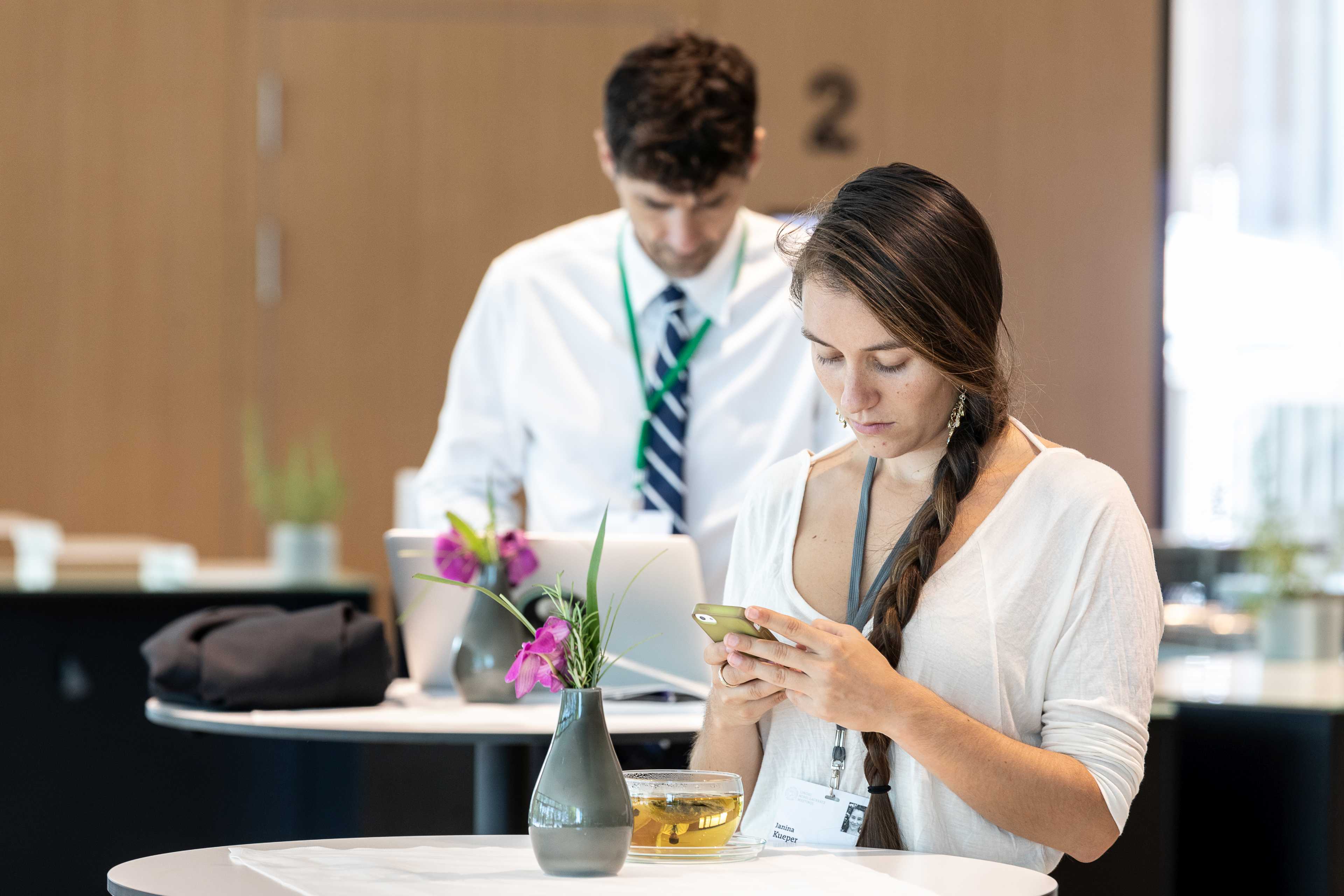 Find out and adhere to the meeting’s social media policy. Many meetings specify their rules regarding what can and cannot be photographed and what can and can’t be shared on social media. For example, some conferences I attend specifically state that attendees cannot take photos of posters or slides.

Tweeting During the Meeting

Tweet exciting news. Did you just meet Nobel Laureate Bill Phillips? Did you enjoy Brian Schmidt’s keynote address? Tell the twitterverse about it. Share how you are participating in the meeting. You can even consider live tweeting talks from the laureates. The only exception is during Master Classes and Open Exchanges which are meant to be private time for young scientists to interact with the Nobel Laureates. As such, don’t tweet anything that is said during these meetings. They are so special, that even I can’t get in! Similarly, during the Poster Sessions, be cautious about tweeting here, as your peers may be presenting cutting-edge, unpublished work. A good rule to follow at poster sessions in general is to always ask the presenter first if you can tweet about them or a photo of their poster.

Tweet, retweet and promote other participants. Contribute to the proliferation of physics and your individual subfields by tweeting info about your peers (with their permission, of course), or retweeting what they offer. You are free and welcome to retweet anything on Twitter, but in particular, consider retweeting notes posted by @LindauNobel. Use your new friend’s handles so they get publicity.

Tweeting After the Meeting

Tweet statements of gratitude, catch up on tweeting photos or experiences you didn’t have the chance to at the meeting. 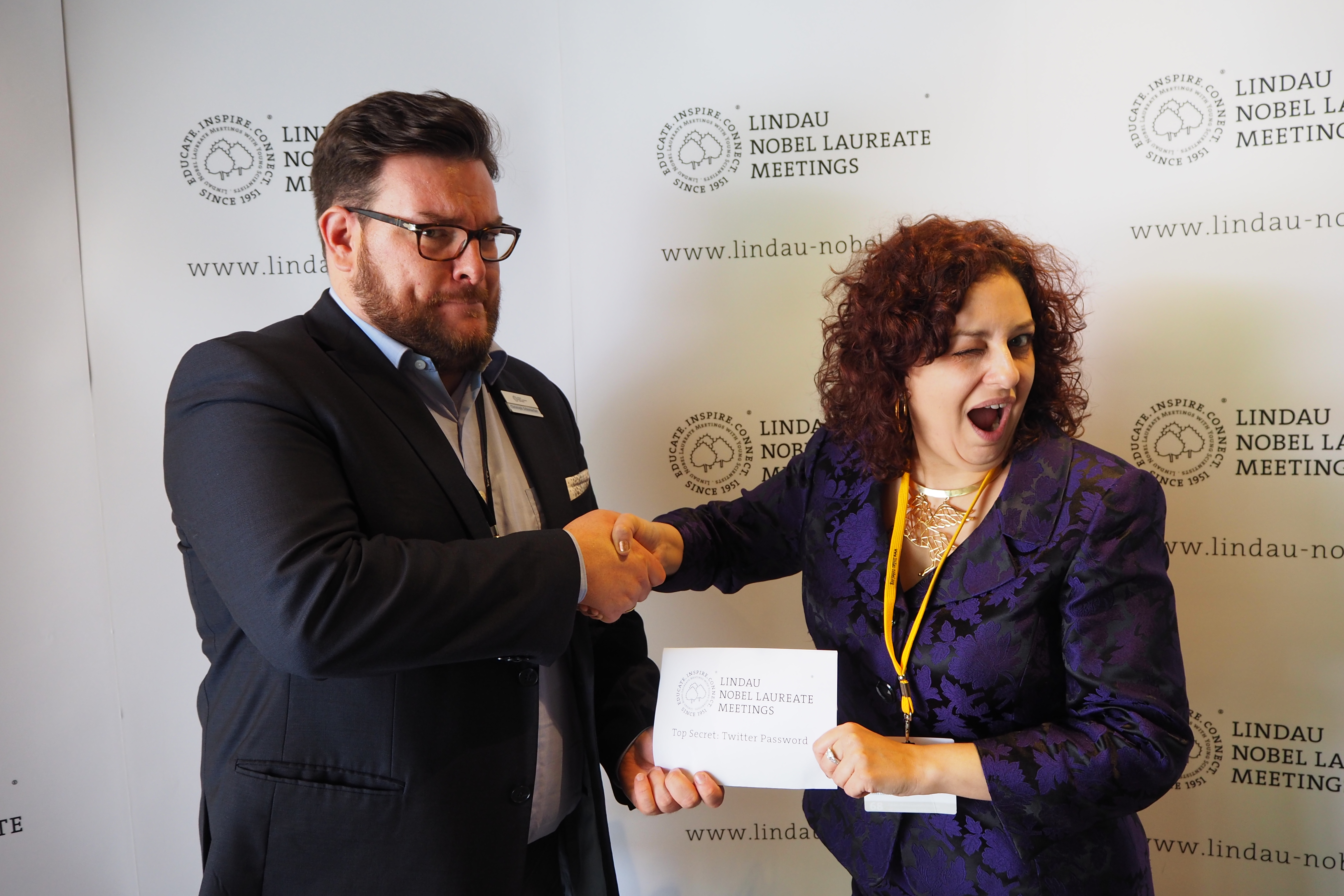 Christoph Schumacher handing over the Twitter password to Alaina Levine during the Bavarian Evening at #LINO18. Does he know what he is doing? Photo/Credit: Kathryn Trotter/Lindau Nobel Laureate Meetings

Understand and leverage your twitter network. Through Twitter, you now have access to not only the people you met at #LINO19, but also all the other thousands of Lindau Alumni, and stakeholders too, spanning the globe. You can utilise Twitter almost as contact management software to help you keep track of your contacts. And when you make a connection on Twitter, don’t forget that you can then direct message that person and ask for a 15 minute skype appointment. In other words, leverage Twitter to make contacts that you can connect and converse with IRL!

At #LINO18, I asked to do a twitter takeover. The media relations team agreed. OMG! I spent Bavarian Night (Thursday evening of the conference, when all young scientists are invited to wear the beautiful clothing representative of their native cultures) on @LindauNobel, tweeting like crazy! I won’t lie – I had a great time tweeting photos of all the stellar Lindau nerds and their gorgeous garb, and covering this joyous affair. I casually mentioned to the Lindau folks I’d love to do it again for #LINO19…and they granted my request!! Bavarian Night is always a truly special part of the Lindau Nobel Laureate Meetings, and I am very eager for you to experience it yourself (and to tweet you looking so fine!). So come find me, and let me share with the world how you rocked Bavarian Night and #LINO19!