The procedure was almost unprecedented, the excitement as well: on March 17 last year, astronomers around John Kovac from the Harvard-Smithsonian Center for Astrophysics announced at a press conference that they had found the imprint of gravitational waves on the cosmic microwave background CMB, caused by the earliest moment after the Big Bang, the so-called cosmic inflation, in astronomical data from the South Pole. A scientific paper with these finding was presented at the same time, also with much ado, although it hadn’t undergone the scrutiny of a peer review process yet; this was done in the months after the March presentation.

But why the excitement, why the secrecy before the press conference, why the sensationalism? Finding proof of inflation theory with the help of gravitational waves is like “killing two birds with one stone”: inflation is a theoretical concept created in the 1980s to smooth out creases in the Big Bang theory. It states that the Universe expanded incredibly fast in a tiny fraction of a second. Many scientists believe that during this brief moment, the monumental expansion of the cosmos would have generated gravitational waves. These waves in turn are a central component Einstein’s theory of general relativity from 1915, that is still the basis for today’s standard model of cosmology.

Einstein’s theory states that time and space are not absolute but relative: time runs faster in high altitudes but slower at fast velocities, as can be measured in the mountains or with satellite clocks; and space can be curved by the gravity of large masses, as was proven in the 1919 solar eclipse when star positions near the Sun seemed to have “shifted”, but in reality only the light rays had been curved by the Sun’s mass. Gravitational waves, that were also predicted by Einstein but never directly detected, are supposed to transport energy away from high-energy events like colliding black holes or pulsars. They are also called “gravitational radiation” or “ripples in spacetime”.

Although never detected directly, there are indirect hints towards the existence of these elusive waves: Russell A. Hulse and Joseph H. Taylor received the 1993 Nobel Prize in Physics for their 1974 discovery of a binary pulsar system that seems to lose energy at a rate that would be compatible with Einstein’s predictions. Since then, a large scientific field, and a closely networked research community, have formed, all trying to find the Holy Grail of Einstein’s theory. Large laser inferometers are located around the globe, some laser beams are several kilometres long, to record the subtle ripples that are supposed to move at the speed of light, and are expected to show up in slight variations of these laser beams. The LIGO instruments in Louisiana and Washington are the most sensitive and part of an international collaboration, with interferometers also located in Germany, Italy, and Japan.

In the future we will even see space interferometers searching for Einstein’s waves: ESA’s LISA pathfinder mission is to be launched this November, to test the technology of a later eLISA mission, the “Evolved Laser Interferometer Space Antenna” that will also try to capture gravitational waves with the help of laser technology; the planned launch date for eLISA is in the 2030s. More recently, the BICEP1 and 2 telescopes at the South Pole have been looking at a patch of the southern sky for three entire years solely to find typical polarizations in the CMB – resulting in the findings presented at the March 2014 press conference.

Billions of dollars – and countless careers – are invested in finding either gravitational waves or data relating to cosmic inflation. This makes the enthusiasm for the 2014 findings understandable: at the press conference, they were called “grand slam”, “missing link” and “smoking gun for inflation” by Marc Kamionkowski of Johns Hopkins University, who is not a member of the BICEP Collaboration. But over the following months, more and more doubts were raised when the BICEP team and the Planck satellite team compared data, culminating in a joint paper in 2015 stating that a polarizations like the ones measured at the South Pole could also be created by dust from our own galaxy. This summer, Nobel Laureate Robert Wilson told his audience at the 65th Lindau Nobel Laureate Meeting that “the result now is that most of what the BICEP2 people saw is probably dust.” Wilson had received the 1978 Nobel Prize in Physics for his discovery of the CMB in 1964 in the first place.

What does this new turn of events mean for the standard model of cosmology? Most of all, the model is firmly in place: researchers keep searching for gravitational waves with interferometers that are increasingly sensitive, and “inflationists” are still searching the CMB for signs of cosmic inflation. Both groups either have or are planning new, more sensitive instruments. All researchers, from the BICEP Collaboration as well as the critics of their interpretations, agree that more data at higher resolutions is required to find the imprint of cosmic inflation on the CMB – if it’s there.

Although the standard model continues to be vindicated by many other experiments, some scientists describe it as “highly unsatisfactory”, like Nobel Laureate Brian P. Schmidt, because “we need to suppose that 95 percent of the Universe is made of types of matter and energy that are not yet identified.” Schmidt is referring to the supposed 25 percent dark matter and 70 percent dark energy, hence the model’s name “cold dark matter model”. The matter we can see – planets, people etc. – supposedly only comprises about 5 percent of all matter. Schmidt also has a piece of advice from his own research: “One should not pre-judge the Universe. The Universe does what it wants and our job is as scientists to figure it out, rather than to assume it should be the way we want it to be.” 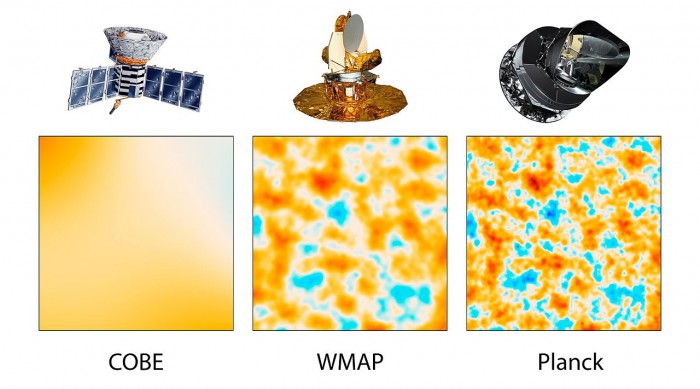 The three panels show 10-square-degree patches of sky maps created by space missions capable of detecting the cosmic microwave background. The first spacecraft, launched in 1989, is NASA’s Cosmic Background Explorer, or COBE. NASA’s next-generation spacecraft was the Wilkinson Microwave Anisotropy Probe, or WMAP. The most advanced satellite yet of this type is Planck, a European Space Agency mission. Planck, launched in 2009, images the sky with more than 2.5 times greater resolution than WMAP. Image: NASA/JPL-Caltech/ESA, public domain