Science in Mexico: Long Tradition,...
Back 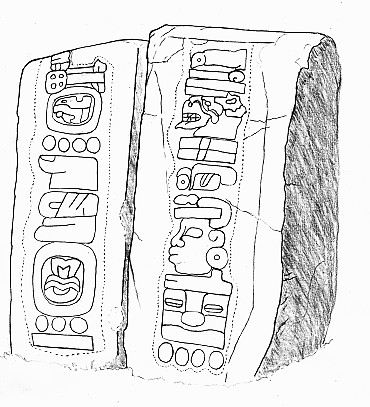 Two stelae from Monte Alban, an archaeological site in Oaxaca in south Mexico. These stelae contain what is thought to be one of the oldest depiction of calendar signs from Mesoamerica. Image: Siyajkak, CC BY-SA 3.0

Did you know that Mexico’s first university was founded already in 1551? Or that today’s Mexico is the largest flat-screen TV manufacturer in the world? Mexico has a long and varied tradition of science and technology. The Olmec civilization invented the number zero. Mayan mathematicians and astronomers have perfected its use, for instance in the famous Mayan calendar: this calendar was crucial for determining seedtimes, rainy seasons, festivities, and much more.

On the one hand, there are particularly Mexican topics, like the research of Mayan, Olmec and Aztec civilizations, or the exploration of the Chicxulub crater. The American Nobel Laureate Luis Alverez first suggested in 1980 that an asteroid or comet impact was a major cause for the dinosaurs’ extinction 66 million years ago, together with his son Walter Alvarez. A giant crash would result in an impact winter, making photosynthesis impossible for plants or plankton, thus effectively cutting off major food chains. The discovery in the 1990s of Chicxulub crater near Yucatan peninsula bolstered the Alvarez hypothesis.

On the other hand, Mexican scientists have made several significant contributions to international research. An early example from the field of chemistry is the 1801 discovery of the element Vanadium in Mexico by Andrés Manuel del Río, chair of chemistry and mineralogy at the Seminario de Minería (College of Mines) that had been established in 1792 in what was then called ‘New Spain’. One hundred years later, vanadium was used in steel alloys for the first time: Henry Ford applied these alloys to build the chassis of his famous Model T. Vanadium allowed for reduced weight while simultaneously increasing the tensile strength of steel. Today it’s still mainly used to reinforce steel, and vanadium pentoxide is a common catalyst to produce sulfuric acid.

The Model T is an early example of the long-term and vital economic and scientific connections to the United States. Today, Mexico is the world largest exporter of flat-screen televisions, as well as the second largest electronics supplier to the US, notably smartphones and tablets. The North American Free Trade Agreement NAFTA, established in 1994, has boosted close trade relations in the last twenty years. And although the incumbent American president had rallied against NAFAT, he now declared he won’t terminate it after all. 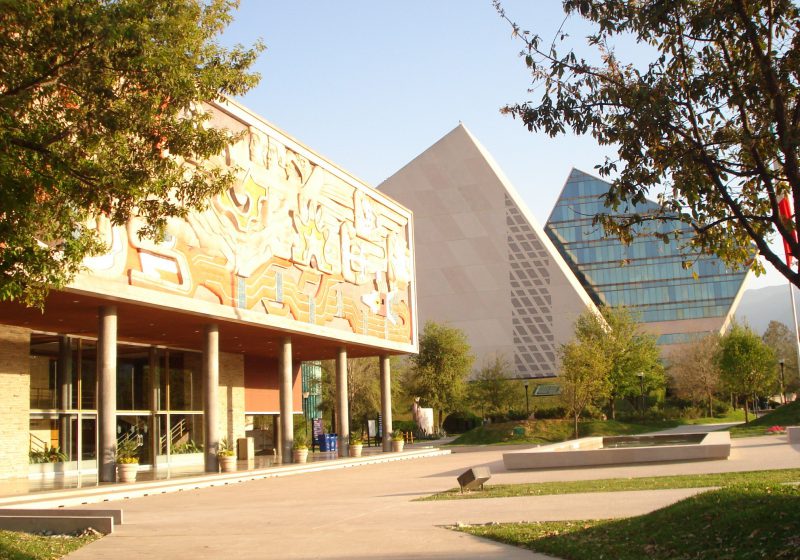 For the current electronics boom, Mexican managers can resort to a skilled workforce with experience in automotive and pharmaceutical production. As Aristóteles Sandoval, govenor of Jalisco, a federal Mexican state, points out: “All the products made in Jalisco can be delivered anywhere in the U.S. in less than 24 hours, (…) and the time zone is almost the same.” Besides geographical, there’s cultural proximity: Mexicans speak American English, not British English like many Asians, and American culture and products are well known and understood.

Of course, education contributes considerably to Mexico’s hightech boom. The prestigious Monterrey Intitute of Technology alone has 31 campuses in all regions of the country, teaching more than 90,000 students. And even in remote areas like Oaxaca in the south, the founder of the Oaxaca State Universities System, Modesto Seara-Vázquez, found that the local indigenous languages, which are tonal like Mandarin, give his students a special aptitude to learn mathematics and coding. All students here are at least trilingual: they speak Mixtec or Zapotec, Spanish and English. 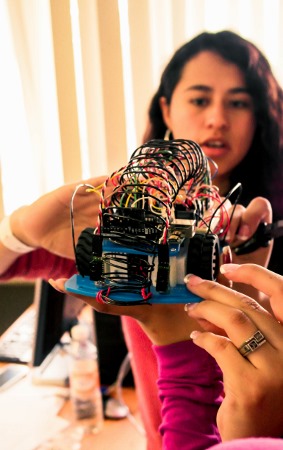 Computer engineering students at UNAM building a mobile robot. UNAM, the National Autonomous University of Mexico, is one of the oldest and most prestigious universities of the country. Photo: PumitasUNAM, CC BY-SA 4.0

But as Octavio Paz wrote, the Mexican Nobel Laureate in Literature: there are always two Mexicos, one developed, one underdeveloped, existing side by side. And although the topics and players have changed since 1950, this sadly still holds true. The news we hear about Mexico is too often about drug wars and murders of politicians and journalists.

There are places where the two Mexicos meet, for instance at the military-style checkpoint for Intel’s ‘Guadalajara Design Center’, Intel’s only research lab in Latin America. The jobs here are not about manufacturing, they’re about creating chips and apps for next generation smartphones. Guadalajara, Jalisco’s capital, is often dubbed the ‘Mexico’s Silicon Valley’, a term it shares with Monterrey further north. More than 120 million dollars have been invested in 300 start-ups since 2014, with at least 25,000 engineers working here.

Even if the distances seem huge between Intel’s lab on the hilltop and the shanty town below, and not just in terms of kilometers, education can help to bridge this gap. As the city’s mayor Enrique Alfaro confides to the Washington Post: “Graduates being courted by Google don’t pick up a gun,” meaning that poverty and unemployment can make the recruitment by drug cartels too easy. Ultimately, only education and employment will brake the vicious cycle of poverty, drugs and violence. This is why the new mayor is implementing school programmes to encourage STEM training, and why he’s installing a tech zone and wants to improve municipal infrastructure for companies. And on the national level, the 57th Mexican president Enrique Peña Nieto announced a new research agenda with increased spending for science and education in 2013.

Mario J. Molina is the first Mexican to be awarded a scientific Nobel prize. In the 1970s, he described, together with his boss F. Sherwood Rowland, how chlorofluorocarbons (CFCs) destroy the ozone layer in the stratosphere, thus weakening the Earth’s protective shield against UV radiation. The two chemists found that CFCs released into the atmosphere do not decay until they reach the stratosphere, where they are destroyed by solar radiation. In this process, chlorine atoms are released that finally destroy ozone. They not only published their findings, but also announced them outside of the scientific community to stop the further emission of CFCs.

Finally, their warnings were taken seriously and the harmful substances were banned in the Montreal Protocol in the mid-1980s. This protocol, together with the Vienna Convention two years earlier, can be considered as “perhaps the most successful international treaties the world has seen”, as the prestigious Michigan Journal for International Law wrote. For their findings, Molina, Rowland and Paul Josef Crutzen were awarded the 1995 Nobel Prize in Chemistry. In recent years, Molina has been informing the public about the data and dangers of global warning with the same fervour as his fight against CFCs. He is one of the 76 Nobel Laureates to sign the Mainau Declaration 2015 on Climate Change that urges international governments to take decisive steps against global warming. This appeal is now more urgend than ever, as US President Donald Trump plans to reverse his predecessor’s climate policy.

This year, Mexico hosts the International Day at the Lindau Nobel Laureate Meeting on Monday, June 26th. This day will start bright and early with a Science Breakfast at 07:00 a.m., with Mario Molina attending and Christian González Laporte as moderator, Brussels representative of CONACYT. In the evening, CONACYT Director General Enrique Cabrero Mendoza will give a speech on ‘Science in Mexico: Research and Policies’. The band Mariachi El Dorado will provide a genuine Mexican ambience. 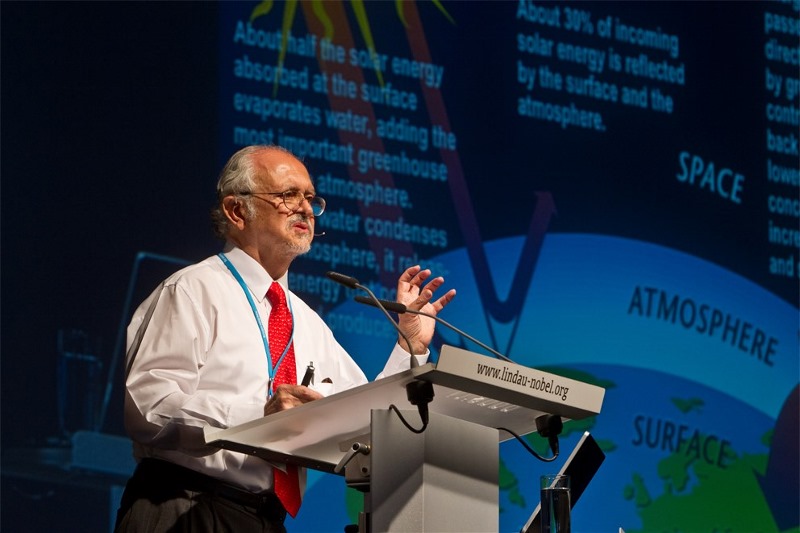 Mario J. Molina delivering his lecture ‘The Science and Policy of Climate Change’ at the 62th Lindau Nobel Laureate Meeting in 2012. Molina had received his first academic degree at UNAM and later became an assistant professor there. In 2004, he started teaching at the University of California in San Diego. Before that, he has worked at the UC in Irvine, for the Jet Propulsion Laboratory and for MIT. In Mexico City, he set up a center for the studies in energy and environment. Photo: Christian Flemming/LNLM