Being able to see something often precedes understanding its function. In the case of molecules and atoms, this requires advanced methods. Visualising biomolecules is crucial for both the basic understanding of the chemistry of life and for the design of pharmaceuticals. Thanks to the ground-breaking work of Jacques Dubochet, Joachim Frank and Richard Henderson to the development of cryo-electron microscopy (cryo-EM), researchers can now freeze biomolecules mid-movement and image cellular processes they have never previously seen.

There have been two powerful imaging methods before cryo-EM, namely, X-ray crystallography and nuclear magnetic resonance (NMR) spectroscopy. These methods have enabled the structural analysis of thousands of biomolecules. However, both methods suffer from fundamental limitations. NMR only works for relatively small proteins in solution. X-ray crystallography requires that the molecules form well-organised crystals. The images are like black and white portraits from early cameras – their rigid pose reveals very little about the protein’s dynamics.

Richard Henderson succeeded in using an electron microscope to generate a three-dimensional image of a protein at atomic resolution. This breakthrough proved the technology’s potential. Henderson used this older method for imaging proteins, but setbacks arose when he attempted to crystallise a protein that was naturally embedded in the membrane surrounding the cell. Membrane proteins are difficult to manage, because they tend to clump up into a useless mass once they are removed from their natural environment – the membrane. The first membrane protein that Richard Henderson worked with was difficult to produce in adequate amounts; the second one failed to crystallise. After years of disappointment, he turned to the only available alternative: the electron microscope.

When the electron microscope was invented in the 1930s, scientists thought that it was only suitable for studying dead matter. The intense electron beam necessary for obtaining high resolution images incinerates biological material and, if the beam is weakened, the images lose contrast. In addition, electron microscopy requires a vacuum, a condition in which biomolecules deteriorate because the surrounding water evaporates. When biomolecules dry out, they collapse and lose their natural structure, rendering the images useless.

Bacteriorhodopsin is a purple protein that is embedded in the membrane of a photosynthesising organism, where it captures the energy from the sun’s rays. Instead of removing the sensitive protein from the membrane, as Richard Henderson had previously tried to do, he and his colleagues took the complete purple membrane and put it under the electron microscope. In this way, the protein retained its structure because it remained membrane-bound. To prevent the sample’s surface from drying out in the vacuum, they covered it with a glucose solution.

The harsh electron beam was a major problem, but the researchers made use of the way in which bacteriorhodopsin molecules are packed in the organism’s membrane. Instead of blasting it with a full dose of electrons, they used a weaker beam. The image’s contrast was poor, and they could not see the individual molecules, but they were able to make use of the fact that the proteins were regularly packed and oriented in the same direction. When all the proteins diffracted the electron beams in an almost identical manner, they could calculate a more detailed image based on the diffraction pattern – they used a similar mathematical approach to that used in X-ray crystallography.

To get the sharpest images, Henderson travelled to the best electron microscopes in the world. All of them had their weaknesses, but they complemented each other. Finally, in 1990, 15 years after he had published the first model, Henderson achieved his goal and was able to present a structure of bacteriorhodopsin at atomic resolution. He thereby proved that cryo-EM could provide images as detailed as those generated using X-ray crystallography, which was a crucial milestone. However, this progress was built upon an exception: the way that the protein naturally packed itself regularly in the membrane. Few other proteins spontaneously order themselves like this. The question was whether the method could be generalised: would it be able to produce high-resolution three-dimensional images of proteins that were randomly scattered in the sample and oriented in different directions?

On the other side of the Atlantic, at the New York State Department of Health, Joachim Frank had long worked to find a solution to just that problem. Joachim Frank made the technology generally applicable. Between 1975 and 1986, he developed an image processing method in which the electron microscope’s fuzzy two-dimensional images are analysed and merged to reveal a sharp three-dimensional structure.

Already in 1975, Frank presented a theoretical strategy where the apparently minimal information found in the electron microscope’s two-dimensional images could be merged to generate a three-dimensional whole. His strategy built upon having a computer discriminate between the traces of randomly positioned proteins and their background in a fuzzy electron microscope image. He developed a mathematical method that allowed the computer to identify different recurring patterns in the image. The computer then sorted similar patterns into the same group and merged the information in these images to generate a sharper image. In this way he obtained a number of high-resolution, two-dimensional images that showed the same protein but from different angles. The algorithms for the software were complete in 1981.

The next step was to mathematically determine how the different two-dimensional images were related to each other and, based on this, to create a three-dimensional image. Frank published this part of the image analysis method in the mid-1980s and used it to generate a model of the surface of a ribosome, the gigantic molecular machinery that builds proteins inside the cell. Joachim Frank’s image processing method was fundamental to the development of cryo-EM.

Back in 1978, at the same time as Frank was perfecting his computer programmes, Jacques Dubochet was recruited to the European Molecular Biology Laboratory in Heidelberg to solve another of the electron microscope’s basic problems: how biological samples dry out and are damaged when exposed to a vacuum. Henderson had used a glucose solution to protect his membrane from dehydrating in 1975, but this method did not work for water-soluble biomolecules. Other researchers had tried freezing the samples because ice evaporates more slowly than water, but the ice crystals disrupted the electron beams so much that the images were useless. Also, the vaporising water was a major dilemma.

Jacques Dubochet saw a potential solution: cooling the water so rapidly that it solidified in its liquid state to form a glass instead of crystals. A glass appears to be a solid material, but is actually a fluid because it has disordered molecules. Dubochet realised that if he could get water to form glass – also known as vitrified water – the electron beam would diffract evenly and provide a uniform background.

Initially, the research group attempted to vitrify tiny drops of water in liquid nitrogen at –196°C, but were successful only when they replaced the nitrogen with ethane that had, in turn, been cooled by liquid nitrogen. Under the microscope they saw a drop that was like nothing they had seen before. They first assumed it was ethane, but when the drop warmed slightly the molecules suddenly rearranged themselves and formed the familiar structure of an ice crystal. This was a great success, particularly as some researchers had claimed it was impossible to vitrify water drops.

After the breakthrough in 1982, Dubochet’s research group rapidly developed the basis of the technique that is still used in cryo-EM. They dissolved their biological samples – initially different forms of viruses – in water. The solution was then spread across a fine metal mesh as a thin film. Using a bow-like construction they shot the net into the liquid ethane so that the thin film of water vitrified. In 1984, Jacques Dubochet published the first images of a number of different viruses, round and hexagonal, that are shown in sharp contrast against the background of vitrified water. Biological material could now be relatively easily prepared for electron microscopy, and researchers were soon knocking on Dubochet’s door to learn the new technique.

In 1991, when Joachim Frank prepared ribosomes using Dubochet’s vitrification method and analysed the images with his own software, he obtained a three-dimensional structure that had a resolution of 40 Å. This was an amazing step forward for electron microscopy, but the image only showed the ribosome’s contours. In fact, it looked like a blob and the image did not even come close to the atomic resolution of X-ray crystallography. 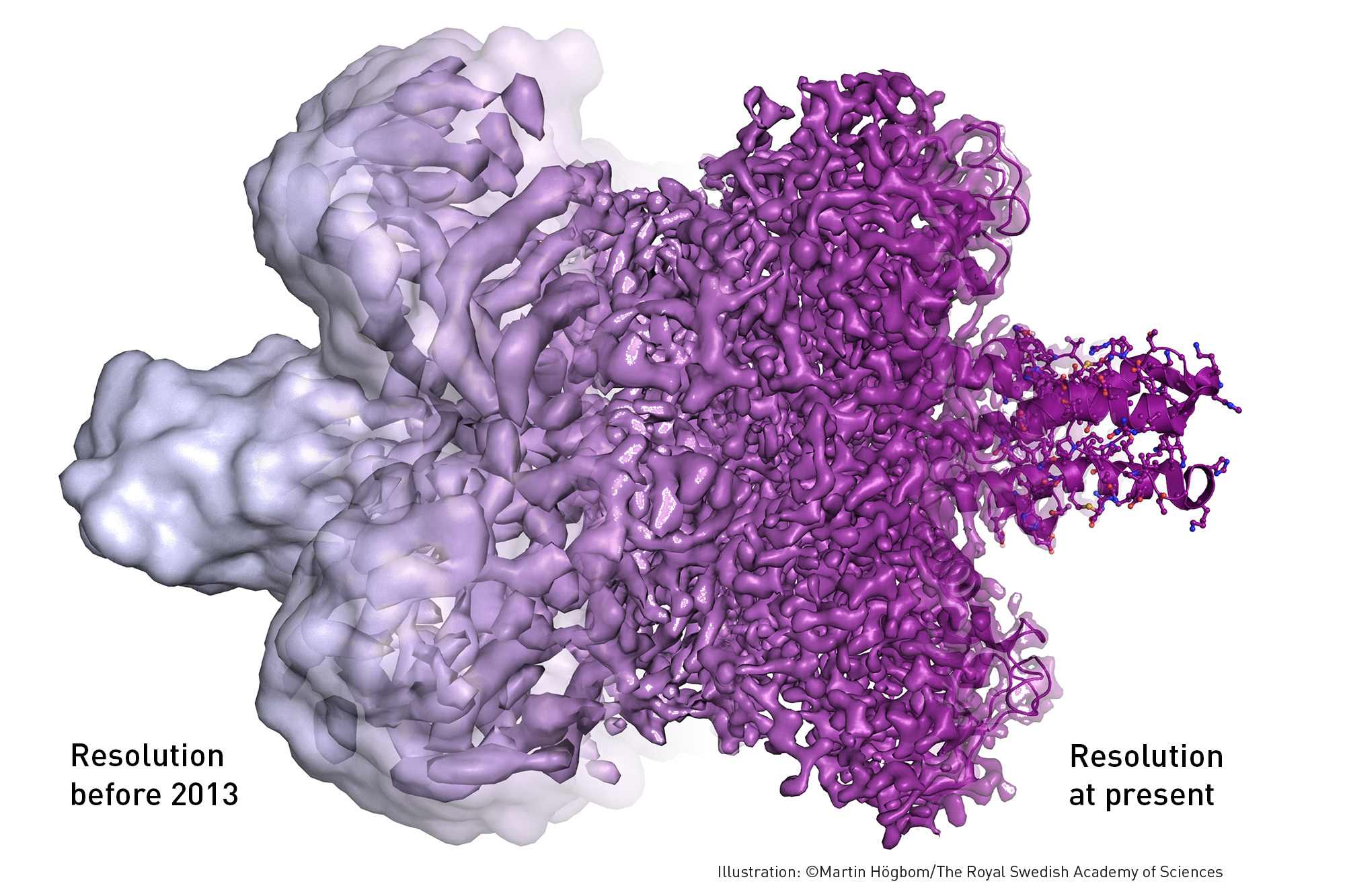 The electron microscope has gradually been optimised, greatly due to Richard Henderson stubbornly maintaining his vision that electron microscopy would one day routinely provide images that show individual atoms. Indeed, recent years have witnessed a ‘resolution revolution’. Resolution has improved, Ångström by Ångström, and the final technical hurdle was overcome in 2013, when a new type of electron detector came into use. Researchers can now routinely produce three-dimensional structures of biomolecules.

There are a number of benefits that make cryo-EM so revolutionary: Dubochet’s vitrification method is relatively easy to use and requires a minimal sample size. Due to the rapid cooling process, biomolecules can be frozen mid-action and researchers can take image series that capture different parts of a process. This way, they produce ‘films’ that reveal how proteins move and interact with other molecules. Using cryo-EM, it is also easier than ever before to depict membrane proteins, which often function as targets for pharmaceuticals. For instance in the Zika virus outbreak in 2015-16, cryo-EM was used to visualise the virus’ membrane within months. As the Nobel Committee’s press release appreciates: “this method has moved biochemistry into a new era.”