Einstein: Travelling Through Spacetime
Back

60th anniversary of the death of Albert Einstein: How his general relativity theory changed the world.

Albert Einstein was a true revolutionary: he challenged Newtonian physics, and won. “Space” and “time” are not considered absolute anymore, but can be “curved” or “dilated” in the four dimensional fabric of spacetime. And gravitation is not a force, but only a property of spacetime. 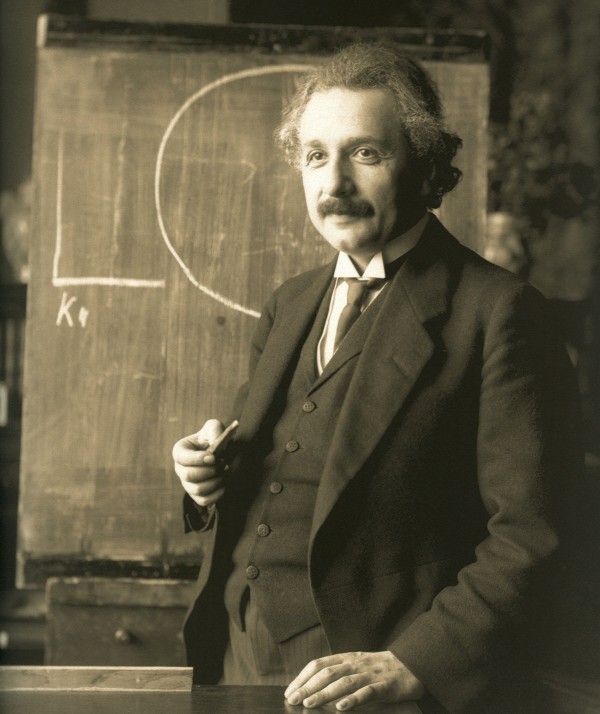 But what does this shocking, earth-shaking theory mean in practice, in everyday life? Not only we are wondering about this, also his contemporaries had difficulties understanding him, and only experts read his writings. This changed dramatically in May 1919 when measurements during a solar eclipse confirmed Einstein’s predictions and theories. During a total solar eclipse, star positions near the Sun were photographed that are normally invisible in daylight. With these photographs, Einstein could prove that the starlight was diverted by the Sun’s mass – spacetime is curved by the presence of matter. The measurements pretty much coincided with Einstein’s predictions. Virtually over night, the physicist became world famous. The Nobel Prize in Physics was only a matter of time, he was awarded the prize in 1922. 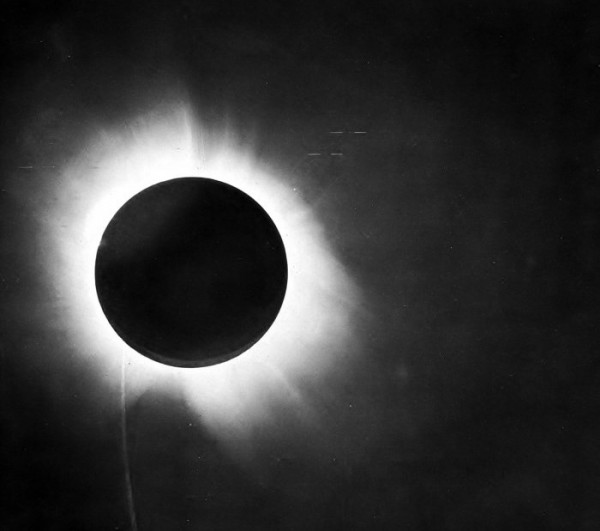 Sir Arthur Eddington led the expedition to the West-African island of Principe where this photo of a total solar eclipse was taken on May 19th, 1919. The expedition’s goal was to prove or disprove Einstein’s predictions. (In the upper half, the relevant star positions are marked.) Photo: F.W. Dyson, A.S. Eddington, C. Davidson, public domain

So now we know that great masses can curve space. But what about time? How can time be accelerated or slowed down? This sure is difficult to imagine. Ten years ago, an amateur researcher made an interesting experiment: He took his children and his best atomic clocks on a camping trip to the mountains. After returning a few days later, the travelling clocks had gained a few nanoseconds, meaning they had run faster in the mountains because the gravity there was slightly lower than at home.

“But what are a few nanoseconds?” some will ask now. Well, these same people probably have a satnav system in their cars. These systems rely on data from GPS satellites – and for these satellites, “a few nanoseconds” make all the difference, at least if you don’t want to end up in a ditch. The satellites have high-precision clocks on board, but due to their altitude – 20,000 kilometres above sea level – they run faster than similar clocks on the surface of the earth; this effect needs to be compensated. At the same time, their travelling speed makes the clocks run slower (Einstein’s famous twin paradox predicts how a space travelling twin would probably age slower than the twin who stayed at home). For satellite clocks, the gravitational effect is stronger, so when the clocks are built on Earth they need to run “slower” than the clocks that remain on the ground. 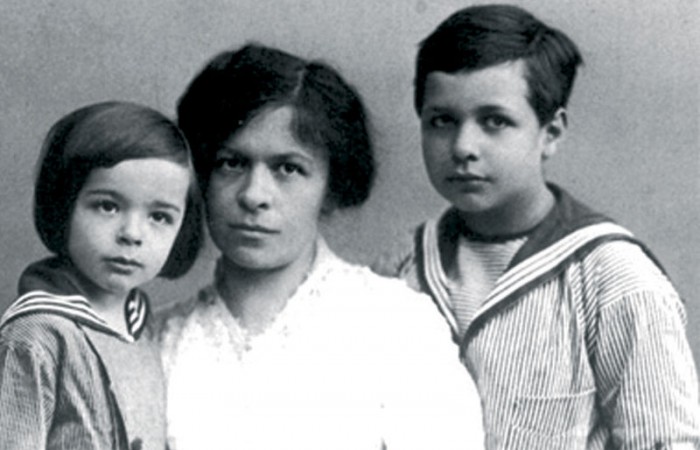 Mileva Einstein with her two sons Hans Albert (right) and Eduard in 1914. She received the Nobel prize money but spent most of it on the care of her younger son who suffered from schizophrenia. The older became a professor for hydraulics at the University of California in Berkeley. Photographer: unknown

The year 1919 not only meant a scientific and personal breakthrough for Einstein – it was also the year of some radical private changes. With his growing popularity, he was able to finalise his divorce from his first wife Mileva who lived in Switzerland with their two sons. Originally she didn’t want a divorce, and a final settling was difficult due to financial issues. Because of exchange rates, Einstein had to send a large part of his Berlin income to support his family in Zurich. Now that he could expect to win the Nobel Prize, Mileva was promised the prize money of 180,000 Swiss francs and finally agreed to divorce him – a unique event, for Einstein hadn’t received the prize yet!

Mileva Marić originally came from the Vojvodina area – now in northern Serbia, then in Austro-Hungary – and was one of the first women to study physics and mathematics in Zurich, where she met Albert. When they married in 1903, their daughter was already about one year old. But an illegitimate child was still considered a scandal, and Einstein, at that time unemployed, would have had an even harder time finding a job if the girl’s existence had become common knowledge. So she remained with Mileva’s parents, and no researcher was ever able to find out what had happened to her. Did she die young? Was she adopted? When Mileva took her final exams, she was already pregnant – and failed. In the years that followed, she had to give up her career, along with her daughter. In 1919, she also gave up her marriage. 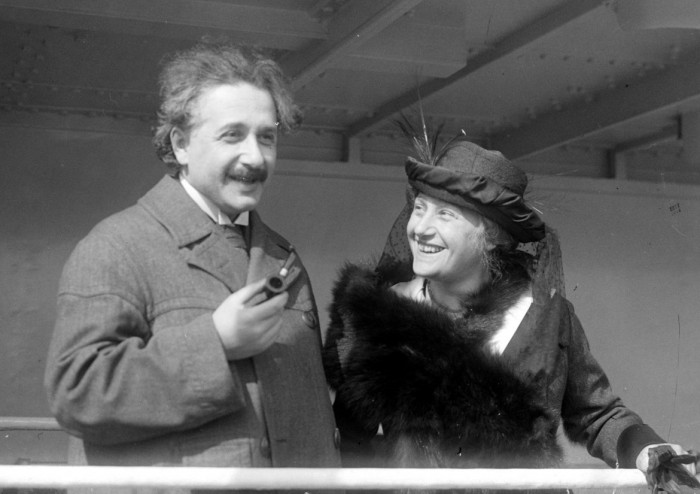 Einstein with his second wife Elsa, who was also his first cousin. She had insisted on the wedding, partly because their cohabitation diminished the marriage prospects of her two daughters from a previous marriage. Photographer: unknown, public domain

Einstein was awarded the 1921 Nobel prize in 1922. He was not able to receive the prize in person, because he was travelling by ship to Japan when the prize was announced. The German ambassador in Stockholm accepted the prize on his behalf, although Einstein was now a Swiss national – he had renounced his German citizenship as a youth to avoid military service. After emigrating to the United States in the early 1930s, he also became an American citizen. A pacifist his entire life, he was a co-initiator of the Manhattan project that developed and built the American atomic bomb, a role he later deeply regretted. The greatest physicist of his time died sixty years ago, on April 18th 1955 in Princeton, New Jersey. 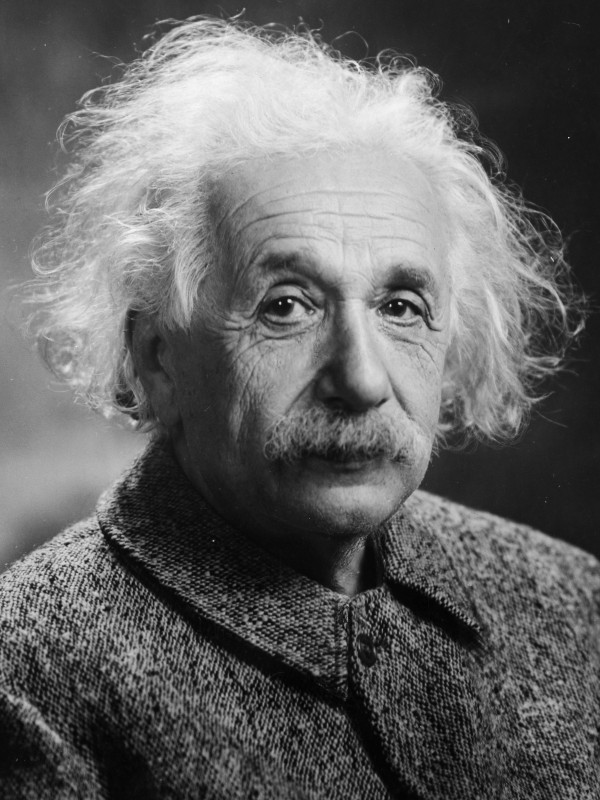 Einstein in 1947, eight years before his death. His compulsive working habits had lead to numerous health problems in the second half of his life. His wife Elsa had already died in 1937, her daughter Ilse even earlier. His second step-daughter Margot cared for him until his death. Photo: Oren Jack Turner, Princeton, N.J.