A little over a week ago at the Lindau conference Theordor Hanch hinted at new measurements of the size of the proton which may impact the fundamental theory of quantum electrodynamics. Hansch’s lecture was an overview of the history of lasers progressing from our realization of the wave/particle duality nature of light to new research published in Nature on the size of the proton. The new research relies on the fact that the energy levels allowed within an atom depend upon the quantum mechanical interaction of the proton and the electron (or in the case of this recent experiment the exotic muon particle). Each atom has its own energy levels and corresponding spectral lines like a fingerprint. Understanding the spectra produced by atoms was historically very important, to stress this Hansch called the simple hydrogen spectrum the ‘Rosseta stone of atoms.’ Tiny discrepancies in the expected spectra of the atom in experiment compared to theory have led to major advances in fundamental knowledge. The breakthrough that allowed for exploration of these discrepancies in the behavior of atoms occurred exactly 50 years ago with the development of the laser.

The Hansch lecture on the heartbeat of light is available to watch on the Lindau conference website here. It is at least worth watching what he explains at minute 18 on the nonlinear self organization of light pulses in pulsed lasers in analogy to mechanical pendulums. He shows a video of ten mechanical pendulums in a row with staggered frequencies ranging from 30 to 39 cycles per minute. Each pendulum corresponds to one of the frequencies present in a laser cavity and at the first moment all the lasers are in phase such that constructive interference occurs corresponding to a laser pulse or a large transfer of energy. Quickly the pendulums get out of phase and although they look chaotic there are smaller emerging and disappearing patterns. If you wait long enough the pendulums briefly line up in phase again and this is when the laser when emit the next big flash of light. This demonstration is lovely because it underlies all of physics, if you are a physicist you probably can immediately visualize what I am describing, if you are not a physicist you may have to see the video to visualize what I am talking about, but everyone will appreciate the beauty of the simple demonstration which was effective enough to illicit a round of applause from the audience. 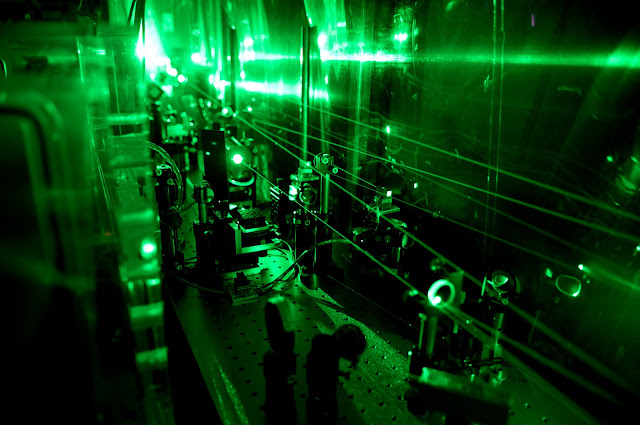 Historically precision measurement of the hydrogen energy levels were difficult because Doppler broadening is large for the particularly light weight hydrogen atom. Hansch explained that with lasers you can pick out hydrogen that is standing still or at most moving sideways using saturation spectroscopy. The development of lasers allowed physicists for the first time to see single fine structure components in atoms particularity the Lamb shift discerning the 2S state where the electron comes close to the proton and the 2P state where it stays away. The saturation spectroscopy technique allows the Lamb splitting of energy levels to be seen plainly. The Lamb shift depends on the size of the proton, but to probe the proton size more finely tricks are needed.

The notion of size for a particle like the proton that resides in the realm quantum mechanics is tricky to define, but there are two classic ways of measuring its radius: scattering of electrons from a hydrogen atom or by looking at the exact energy levels of a hydrogen atom. The size of the proton has been based mainly on the precision spectroscopy of atomic hydrogen and calculations from bound-state quantum electrodynamics. It is known that a hydrogenic atom with a smaller Bohr radius would enhance the effects related to the finite size of the proton, that is to say a proton interacting with a bound oppositely charged massive particle would demonstrate effects in Lamb shift due to a contribution from the proton’s size. A collaborative team of scientists lead by Randalf Pohl have spectroscopically measured the Lamb shift of muonic hydrogen and found the charge radius of the proton is 4% smaller than the previously accepted value.

Muonic hydrogen is like regular hydrogen but the electron has been swapped for a muon. The experiment called for muonic hydrogen in which a muon travels around the proton with a radius 200 times smaller than that of hydrogen constructed from and electron. A muon is an elementary particle similar to the electron, is has the the same negative charge and spin, but it is about 200 times more massive than an electron. The muon ‘orbits’ so close to the proton in fact that it actually spends some portion of its orbit within the radius of the proton. Muons decay quickly and creating muonic hydrogen is a task that could only be undertaken at the Paul Scherrer institute in Switzerland which is the sole location in the world where a muon beam of sufficient intensity could be generated.

The experiment worked as follows. The researchers created muonic hydrogen at the Paul Scherrer Institute with equipment constructed especially for the experiment (it took ten years to build). Once the muonic hydrogen is created the researchers shine in a tunable infrared laser with a frequency corresponding to the splitting between the 2S and 2P states. The laser will excite some of the muons from the 2S into the 2P state (when the muonic hydrogen is created a tiny fraction of of it is naturally produced in the 2S state), but the muons will quickly decay to the ground state emitting a powerful x-ray in the process. The researchers measured the amount of x-rays emitted at each specific frequency they had their infrared laser tuned to and the exact frequency which generated the most x-ray flux is the Lamb shift measurement they made.

The new measurement is discrepant with previous results, but the team has done such a careful job of measurement, the first results indicating a discrepancy were discovered six years ago but the results were held, that theoreticians are questioning the accuracy of fundamental constants like the Rydberg constant and basic theories of quantum electrodynamics. There is some more discussion and interpretation of the experiment over at Uncertain Principles on how the proton is even smaller than we thought. I think that it is a very cool discovery. Hansch commented on discovery during his lecture with an anecdote about Arthuer Schawlow (who received the 1981 Nobel for his work with laser spectroscopy). Schawlow would ask students in the hallways at Stanford, ‘What have you discovered?’ and Hansch says the message to students is, ‘I am not here to learn something old, I am here to discover something new.’