CERN, Dark Energy, and Dark...
Back
When you throw together six distinguished physicists (David Gross, John Mather, Carlo Rubbia, George Smoot, Gerardus ’t Hooft, and Martinus Veltman) into debate on what CERN will teach us about the dark energy and dark matter you can’t guarantee the same kind harmony that these physicists strive for in their own theories. There was a majority agreement that there are triumphs in cosmology concerning the discovery of missing mass (dark matter) and the observation of the accelerating universe (dark energy). There was also agreement that CERN will place constraints or make discoveries on dark matter, however it is not clear at all that CERN has any bearing on dark energy.

First, I would like to clarify to readers the nature of this discussion is not so much about the existence of dark matter (Veltman actually does not believe in dark matter, however, when asked for reasoning he shortsightedly discussed …

…galaxy rotation curves and the need to modify gravity; other members of the panel have pointed out that dark matter is observed in many observational realms including individual galaxy collisions like the bullet cluster, gravitational lensing, the cosmic microwave background, and baryonic acoustic oscillations) or dark energy, but on their origins and consequences for physics. The debate opened with mini lectures on the standard cosmological model and standard particle physics model in order to place the discussion in context. George Smoot briefly discussed the standard cosmological model’s great successes and David Gross covered dark matter and dark energy from the perspective of particle physics. Gross pointed out that dark matter was the first form of matter discovered by looking at the sky (if you don’t count helium). He was intrigued by the prospects of Weakly Interacting Massive Particles (WIMPs) to be detected at CERN because WIMPS have a mass predicted from theoretical considerations somewhere between 100 Gev to 1 Tev, which is just right for the Large Hadron Collider (LHC) at CERN to discover.

The panel covered many topics, so I am going to reformat the discussion into three summary highlights on dark matter, dark energy, and questions from the audience of young researchers. During the entire talk there was a video conference link to the control room at CERN where the LHC was colliding particles at 3.5 Gev. Sergio Bertolucci spoke on the desperate need for experimental results and pointed out that the LHC was doing its part (the panel in Lindau agreed). Bertolucci inserted into the discussion the excitement for the experimental discovery of unknown unknowns. A surprise during the panel was that the LHC was hit by a lightning bolt and the beam safely dumped and the superconducting magnet quenching process was activated (you can follow the live status of the LHC at any time here). The multitude of observations that support dark matter have lead astrophysicists to conclude that the existence of dark matter is the most natural solution to the missing mass problem rather than modifying fundamental theories of gravity. Rubbia thinks that given that there is such a large amount of dark matter present it must be streaming through us and detectors so dark matter will be detected here on Earth eventually assuming it has some interaction other the gravity. Although, it is not obvious that dark matter will have interactions in nature besides gravity, but if it does have an electroweak interaction there are two good possibilities. First, in supersymmetry theory each particle in the standard model has a supersymmetric partner (quarks & squarks, electrons & selectrons, photon & photinos) and the lightest supersymmetric partner particle would be stable and this particle would may be the WIMP. The second possibility is that there could be sterile neutrinos beyond the standard three flavors known (electron, muon, tauon) and current experiments on neutrino oscillations could be key in discovering discrepancies. Gross summarized the situation by stating that dark matter may be on the road to exact experimental solution in the next decade. Particularly because LHC is at just the right energy. 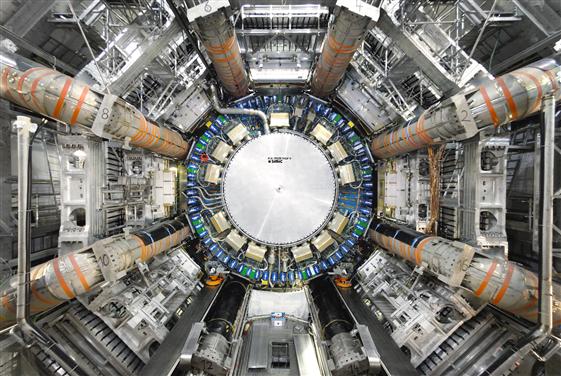 Gross opened the discussion of dark energy by expressing his opinion that dark energy is exceptionally poorly named. It isn’t energy, but negative pressure that is acting on our universe to cause accelerated expansion so if anything we should call it dark pressure. Dark energy is actually a triumph of Einstein’s theory, not his biggest blunder Gross explained as the rest of the panel murmured protests on the historical accuracy of this story. The discussion turned at one point to the  best evidence we have to date for dark energy which is  type Ia supernovae used as standard candles. Rubbia insisted we must determine whether we fully understand these supernovae and we need to gather more data and statistics on them. Mather was careful to inform the audience that we have several other methods to measure dark energy including the microwave background radiation, and baryonic acoustic oscillations, and the growth of structure. Hooft pushed the theoretical frontier when he stated that we need to quantize gravity, a problem that has daunted physicists, including Einstein, for close to a century.

Q: If wimps are produced in the LHC how are they detected?

A: The key point is that if dark matter doesn’t have any kind of interaction besides gravity then we wont produce or detect them at the LHC. If is produced though some mechanism then there would be jets of ordinary particles on one side and nothing on the other side, this would be a sign of dark matter being produced . Technology and theory is very prepared to analyze decay modes and branching characteristics of particles that would result in missing energy and momentum, like dark matter. Notably in 1929 when Pauli hypothesized the neutrino in beta decay it was because he refused to give up energy conservation and thus inferred another unseen particle must be present.

Q: Is superymmety is real how could we not detect it?

A: There are many explanations for this scenario. There could be many contributions to the missing mass problem such as axions, sterile neutrinos, etc.

Q: Is dark energy such a problem (like the distribution of the planets for example)?

A: The entire panel was not content with an anthropic explanation, however, Gross conceded that like understanding the fine structure constant it may ultimately turn out to be a deep theoretical problem without an obvious answer.

There is more to be said and more to learn about particle physics and cosmology from the LHC. The LHC is set to confirm or throw into doubt all of physics and the standard model when it begins to gather data to confirm the existence of the Higgs Boson (which is the mechanism that imparts mass to all particles) and the LHC may also shine a light on dark matter and energy.