A Conversation with Gross on...
Back
Before I can get to the conversation with David Gross and the work he did to receive the Nobel Prize for I have to talk about quarks. Three or two quarks in concert together make up a class of particles known as hadrons which include protons and neutrons. Hence the Large Hadron Collider (LHC) is a collider of protons and neutrons.  The logical conclusion may be that smashing hadrons together in the LHC would produce jets of quarks, but quarks are elusive. Quarks are confined inside hadrons, due to the strong force. The strong force does not let quarks move away from each other but is arbitrarily weak when the quarks are packed closely together due to the property known as asymptotic freedom. The entire model for how quarks interact comes from the elegant theory of quantum chromodynamics.
Asymptotic freedom and quantum chromodynamics (QCD) is an observationally supported theory for which David Gross, David Politzer and Frank Wilczek received the 2004 Nobel Prize. At the Lindau meeting I had the chance to sit down with Gross and talk with him as well as hear his lecture on the frontiers of physics. In this post I want to give  brief background of asymptotic freedom and QCD before summarizing Gross’s talk and then I will present the first half of my conversation with Gross on technical topics. In a follow up post I will present the second half of my conversation with Gross where we discuss the generalities of being a scientist. 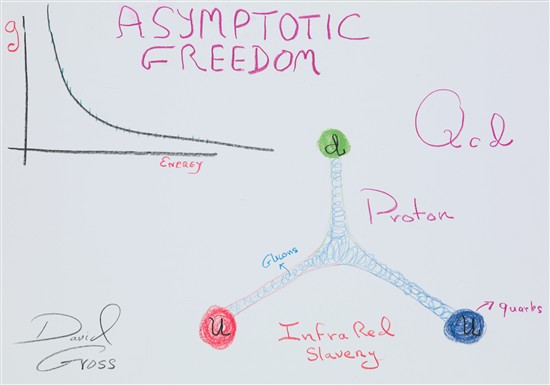