Icy Moon With Hot Springs
Back
Tiny rocky grains point to life-friendly environment on Saturn’s moon Enceladus. Researchers from the international Cassini space mission have found microscopic rocky grains near Saturn they can trace back to its moon Enceladus. But why are tiny silica grains flying around in space? Cassini flyby manoeuvres in the last years have not only revealed a salty ocean under the moon’s ice crust, and water ice geysers – the probe’s instruments have also shown much higher temperatures in the ice cracks of the south pole region where the geysers erupt from. 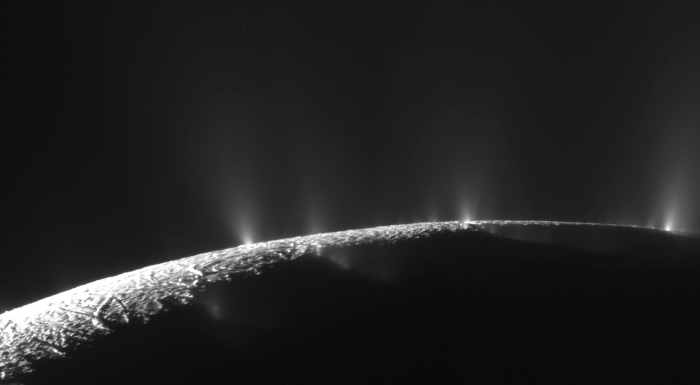 In today’s publication in the journal Nature, the researchers conclude that the most likely explanation for the tiny grains is ongoing hydrothermal activity under the Moon’s ice mantle, meaning interaction between hot and salty water with a porous rocky core. The researchers assume that temperatures of at least 90 degrees centigrade could prevail on the ocean floor – but temperatures might be even higher. “We methodically searched for alternate explanations for the nano-silica grains,” Frank Postberg explains, a Cassini researcher at Heidelberg University and co-author of the paper. “But every new result pointed to a single, most likely origin” – hot springs on the ocean floor. On Earth’s surface, grains like this form when lightly alkaline water, that has a modest salinity but is super-saturated with silica, undergoes a big temperature drop. A similar process would be in line with hot water from Enceladus’ ocean floor quickly rising through a cool ocean and bursting into space through cracks in the ice. What makes this find so exciting is that Enceladus “could contain environments for living organisms,” as the press release of NASA’s Jet Propulsion Laboratory states. The Cassini mission is managed by the JPL in Pasadena, California, but it is a combined mission of NASA, ESA, and the Italian Space Agency. 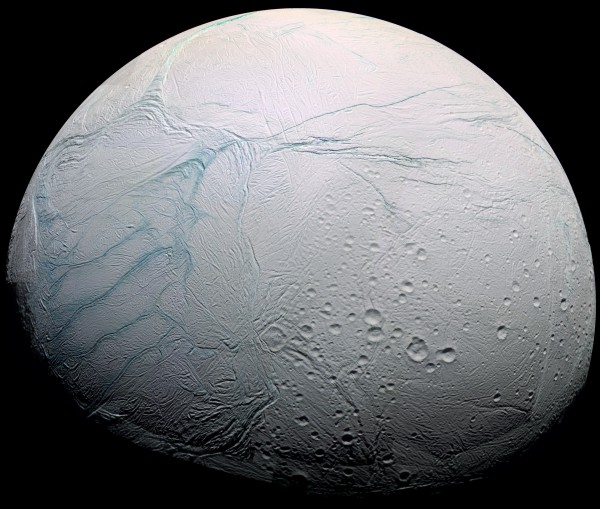 This surprising new discovery follows an extensive, four-year data analysis, plus computer simulations and laboratory experiments. The experiments were performed at the University of Tokyo and verified the conditions under which silica grains evolve at the same size that Cassini detected. These conditions might exist at the seafloor of Enceladus, where hot water from the interior meets the colder water at the sea bottom. Next, the grains travel relatively quickly to the surface, an about 50 kilometre journey, meaning within months or years – otherwise they would become too large, according to the experiments. But why is there so much heat inside Enceladus? The moon has surface temperatures around or below –200 degrees centigrade, suitable to its position in the outer solar system. Tidal heating is one possible heat source: Saturn’s powerful gravitational field is “kneading” all its moons constantly. But the researchers agree that there has to be another heat source to create a temperature gradient of this magnitude. “It’s possible much of this interesting hot-water chemistry occurs deep inside the moons core,” Hsiang-Wen Hsu explains, a postdoc researcher at the University of Colorado, Boulder, and lead author of the current paper. 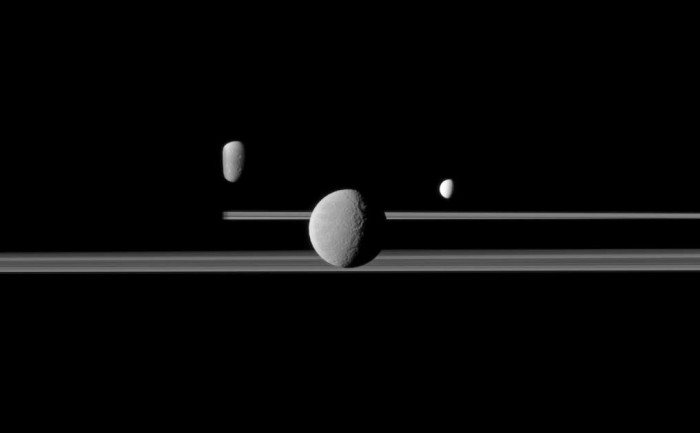 The bright ice moon Enceladus on the right, with Rhea in the foreground, Saturn’s second largest moon, and Dione in the back; Saturn is on the left. The giant gas planet has 62 known moons, but only 13 have a diameter of more than 50 km (Enceladus: about 500 km). Photo: Cassini Imaging Team, SSI, JPL, ESA, NASA

And how where these tiny particles found? The Cassini space probe has a Cosmic Dust Analyzer on board. CDA is a direct sensing instrument that can measure size, speed, direction, electric charge and the elementary composition of the dust particles that fly into its collector, where they’re smashed to smithereens. The instrument was provided by the German Aerospace Center DLR, its team is based at the University of Stuttgart, Germany. 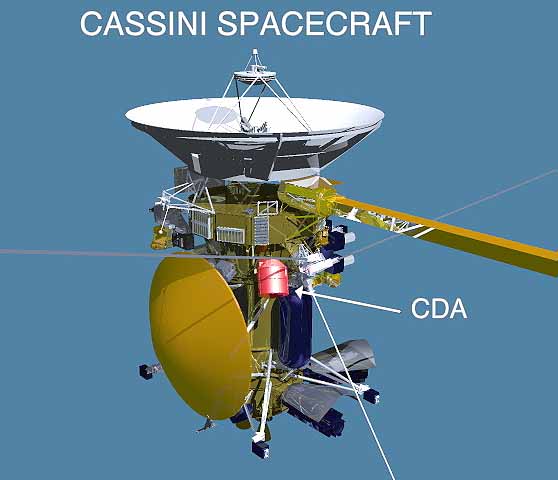 Although Enceladus is now one of the hottest candidates for finding extra-terrestrial life, Cassini’s instruments are not well equipped to find it. “The CDA wasn’t constructed to detect life forms,” Postberg explains. When the space probe was launched in 1997, Enceldaus wasn’t expected to be life-friendly. In fact, knowledge about its saltwater ocean and geysers are results of the Cassini mission. “The CDA was built to study the properties of interstellar and interplanetary dust and the ice grains in the Saturninan system. Everything flying into the CDA is reduced to its molecular and atomic components. In principle, it would be possible to draw inferences from these molecular compounds about life forms, but the sensitivity and resolution of the instrument has just not been optimised to do this. So even if there were for instance bacterial remains among the dust, we wouldn’t be able to say whether these bits belonged to some life form or not,” the Heidelberg-based researcher concludes. But according to him, the next generation of dust analysers, that is already being designed and build, will be high precision instruments calibrated to detect molecular traces of life. 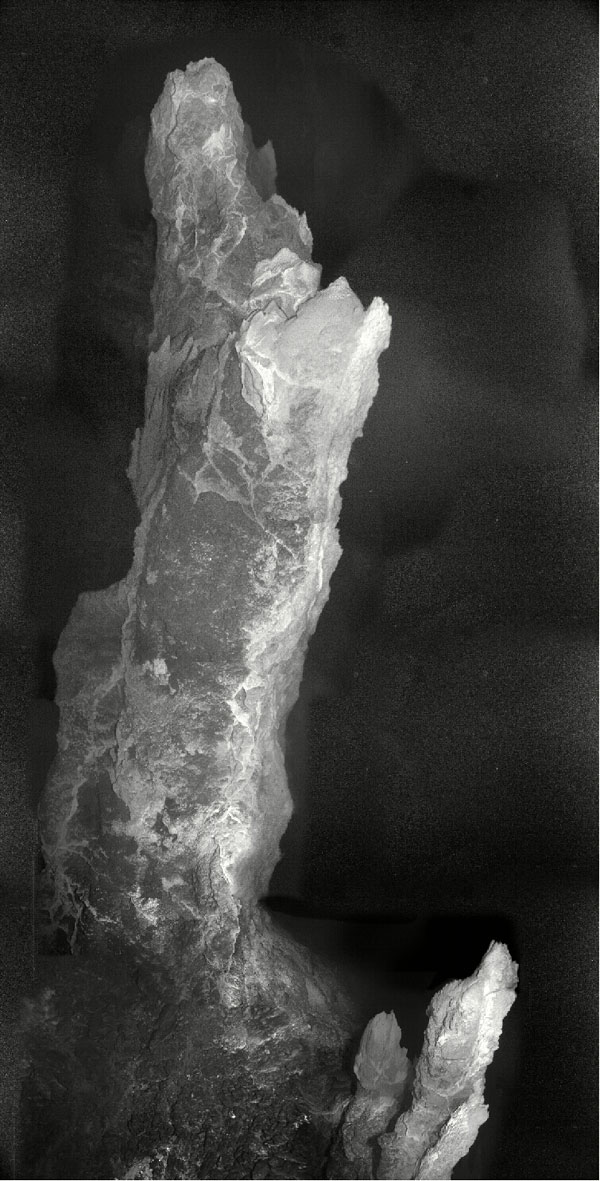 A carbonate chimney more than 9 metres high in Lost City, a field of hydrothermal vents in the mid-Atlantic ocean. This environment is full of life – bacteria, archaea, snails and bivalves – and resembles the presumed conditions on Enceladus, like high pH-value and temperatures around 90 degrees centigrade. Photo: National Science Foundation (University of Washington/Woods Hole Oceanographic Institution)