Wigner was not only one of the greatest physicists of the 20th century – he is also one of the least known. The modest genius died twenty years ago.
During his lifetime, the Hungarian-American physicist formulated at least 27 laws and equations that were named after him, 23 in physics, four in mathematics. In the 1920s, he introduced group theory and symmetries into the developing field of quantum mechanics. As a student in Berlin, he met ‘them all’: Albert Einstein, Erwin Schrödinger, Werner Heisenberg and many more, usually at the Wednesday afternoon colloquia of the German Physical Society, afterwards, the group usually went to a coffee house. Yet he remained very modest. When being awarded the Nobel Prize in Physics in 1963 ‘for his contributions to the theory of the atomic nucleus and the elementary particles’, he was truly surprised. He commented: ‘I never expected to get my name in the newspapers without doing something wicked.’

Eugene Wigner was born in Budapest and studied chemical engineering in Berlin at the Technical University, where he also met the Hungarian physicist Leó Szilárd who became his closest friend. His PhD thesis had the title ‘Formation and Decay of Molecules’. During a short period in Göttingen, he worked on mathematical theories, especially on group theory in quantum mechanics. In 1930, Princeton University offered him a one-year lectureship at seven times the salary he had in Berlin. Before returning home, he signed a five-year contract with Princeton as visiting professor for the half year; the Berlin Technical University responded with a professorship for the other half.

But Wigner could not return to Berlin in 1933 after the Nazis gained power because of his Jewish origins. When his Princeton contract ran out in 1936, he found a position at the University of Wisconsin, where he also met and married his first wife, Amelia Frank, a physics student. He became a US citizen in 1937 and brought his parents to the US. He had introduced his younger sister Margit to the famous British physicist and Nobel laureate Paul Dirac in 1934, and the two got married. In 1937, his wife died unexpectedly, leaving him distraught. Soon afterwards, Princeton offered him a professorship and he returned.

In 1939, the otherwise unpretentious researcher took world history into his own hands when he introduced his friend Leó Szilárd to Albert Einstein. Late in 1938, Otto Hahn in Berlin had been able to detect Barium after bombarding uranium with neutrons and interpreted this find as the first artificial nuclear fission. Now many American researchers were very worried that the Germans, gearing up for war, would possess an atomic bomb first. So Szilárd, Wigner and Einstein wrote a letter to president Roosevelt, urging him to support an American nuclear programme. Although a professed pacifist, Einstein signed this letter to give it more clout. Apparently it reached Roosevelt after Germany’s invasion in Poland in September 1939 – the president was convinced and established the Manhattan project. Eugene Wigner led a research group to design reactors to convert uranium into weapon grade plutonium. In contrast to Einstein, he never regretted his role in the Manhattan project, he was only sorry that the bomb hadn’t been ready earlier. For years, he was afraid that the Germans might win the war. Later he commented this time: ‘Thoughts of being murdered focus your mind wonderfully.’

After the war, Princeton became Wigner’s home university once again. He had married his second wife Mary Annette Wheeler in 1941, a physics professor at Vassar College, and the couple had a boy and a girl. After his second wife died in 1977, he married Eileen Clare-Patton Hamilton, the widow of the Princeton graduate school dean. In 1982, ‘Pat’ accompanied him to Lindau. 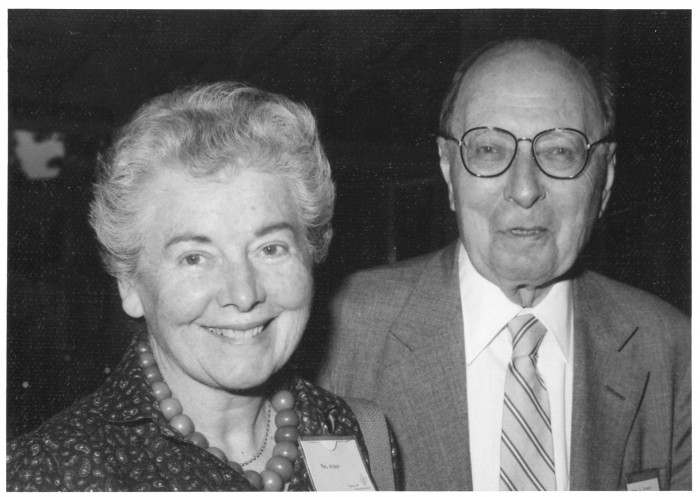 Throughout his long career, Wigner remained inquisitive and versatile. His work on the ‘unreasonable efficiency of mathematics in science’ is his best-known article for the general public: he states that this efficiency ‘is a gift we neither understand nor deserve’. Until this day, Wigner’s equations and matrices are still applied in mathematics and quantum mechanics. Just one example: in 1953, he predicted that hydrogen could become metallic under extreme pressures. Nowadays, many researchers presume that Jupiter’s magnetic field is caused by a large core of metallic hydrogen, and some claim that they were able to detect it under laboratory conditions. The quest for metallic hydrogen continues, and among experts, Wigner’s legacy lives on.

Eugene Wigner participated in four Lindau Nobel Laureate Meetings, in 1968, 1971, 1979, and 1982. Please find an audio recording of his 1982 Lindau lecture in the Lindau Mediatheque.