Angiogenesis or the growth of new blood vessels is one of the most important cellular responses to low oxygen levels.

Life on this earth would just about be unimaginable without oxygen – even a few minutes without this vital element can be fatal for many organisms. However, oxygen levels fluctuate, and therefore a mechanism to ensure that cells can appropriately respond when oxygen levels are low, a condition known as hypoxia, is needed. To ensure that this is possible, multicellular organisms have evolved highly effective signalling molecules and pathways that sense when oxygen is scarce and trigger mechanisms that seek to redress the problem. For the discovery of these molecules and mechanisms, William G. Kaelin, Sir Peter J. Ratcliffe and Gregg L. Semenza, have been awarded the 2019 Nobel Prize in Physiology or Medicine.

All three of this year’s laureates come from medical backgrounds and all three approached the theme of oxygen sensing from a distinct physiological context. The American Greg Semenza found his way to oxygen sensing by way of an initial interest in thalassemia, a blood condition in which the production of haemoglobin is faulty. At the suggestion of colleagues, he decided to also focus on a gene called erythropoietin (EPO), which encodes a hormone that regulates red blood cell production. It was to be a faithful decision, because it would lead him to unravel how cells deal with hypoxia. It was known that some cells produced more EPO when oxygen was scarce, suggesting that cells could both actively sense – and respond – to oxygen levels. Semenza set out to discover the genetic mechanism behind this.

Ratcliffe, meanwhile, who hails from the UK, is a kidney expert and was curious about how specifically that organ was able to sense oxygen. Semenza’s and Ratcliffe’s approaches converged on identifying the DNA regions in EPO and other genes that rendered these cells oxygen-sensitive. After defining these regulatory sequences in DNA that allowed some genes to respond to oxygen, the next challenge was to discover the special protein or transcription factor that bound such sequences, termed hypoxia response elements (HRE), and activated the expression of these genes.

Semenza and his group succeeded in identifying the protein, which they termed hypoxia-inducible factor-1 (HIF-1) and determined that it was active in a range of different mammalian cells. It was also found to regulate the expression of many other genes rather than just EPO – it is now thought that as much as 5% of the human genome is regulated by the HIF-1 protein. This widespread role for HIF-1 suggests that it is performing some crucial function inside cells, and, indeed, embryos lacking the protein fail to develop normally and die before birth because of a failure to properly develop a circulatory system – a process known as angiogenesis. 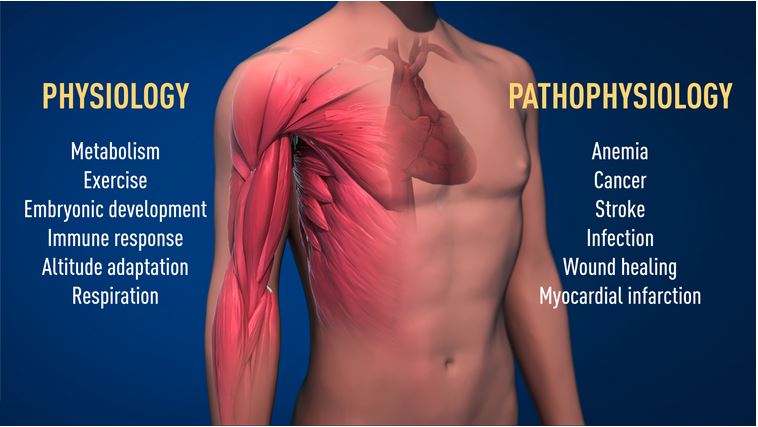 Oxygen sensing and the subsequent cellular response are implicated in many normal as well as abnormal physiological states. © The Nobel Committee for Physiology or Medicine. Illustrator: Mattias Karlén

William Kaelins Jr. comes from the US and his background is in oncology. Kaelin Jr.’s interest in oxygen sensing arose from his focus on a particular type of tumour called von Hippel–Lindau (VHL) disease, named after the German Eugen von Hippel and the Swede Arvid Lindau. These tumours are defined by mutations in the VHL gene and act as if oxygen is scarce – even when it is plentiful. Putting two and two together, Kaelin hypothesised that studying this disease would tell him something interesting about how cells normally respond to low oxygen levels. In a major breakthrough, Kaelin and his collaborators could show that several genes that were already known to be regulated by HIF-1 were produced in high amounts even when oxygen levels were high in cancer cells lacking VHL. Thus, in short, VHL acts to ensure that oxygen-sensitive genes are activated only when oxygen levels are low. How does it do this? It turns out that VHL directly regulates the HIF-1 protein itself. In the presence of normal oxygen levels, the HIF-1 protein is chemically modified. This promotes interaction with VHL which leads to subsequent breakdown of HIF-1.

VHL was originally discovered in the context of cancer, and it is probably true to say that a large part of HIF-1’s fame also rests on its reputation as a ‘good guy gone bad’: many cancers express the protein at very high levels and it is important for cancer development. What is it about oxygen sensing that is so important for cancer? As they grow erratically and evade checkpoints that block uncontrolled cell division, many solid tumours especially often move into areas not serviced by the body’s own blood supply and which are therefore oxygen-poor; thus, they require the blood system to grow in order to make sure that all areas of the tumour receive adequate oxygen. Strategies that target angiogenesis in general and HIF-1 in particular seem to be a promising way of stopping cancer in its tracks, because they block the cancer cell’s oxygen supply.