The Periodic Table: An Appreciation
Back

Today marks the 150th anniversary of Mendeleev’s periodic table, an outstanding achievement whose influence on how we understand the world around us and its constituent elements is hard to overstate.

Scientists love to classify things, be it organisms, proteins or physical and biological processes. It not only makes sense of the world and explains what we already know but also provides frameworks within which to add new findings to pre-existing knowledge. In the history of science, there is perhaps one classification system that stands out by virtue of its sheer brilliance and its influence on how we understand the physical world: the period table, which celebrates its 150th birthday this year and is the result of a lengthy game of solitaire by Siberian chemist Dimitri Mendeleev.

The story goes that after years of attempting to classify the elements Mendeleev hit upon the strategy of creating cards on which he had written the name of a chemical element together with its atomic weight. For three days and three nights, he stayed up playing “chemical solitaire” with the cards. What was the system? How did they all fit together? Finally, on the fourth day he dozed off and had a dream. And just like that it came to him – a table incorporating all of the known elements in a manner that reflected their atomic weights as well as their chemical properties.

In popular discourse, the periodic table as we know it today and the principles underpinning it are generally regarded as being the work of only Mendeleev, but it is not quite as simple as that.

By the middle of the 19th century, over 50 elements had been discovered and isolated. However, as Nobel Laureate Linus C. Pauling emphasised many years later, there was as yet no overarching system devised for how to best classify elements and to represent their relationships with each other. The first attempts in this direction were smaller-scale groupings of elements based on their atomic weights, first in groups of three by J.W. Döbereiner and then into larger groups by other scientists. One challenge to a really systematic representation of the chemical elements was the lack of uniformity in how scientists were calculating atomic weights around the 1850s. Based on a unified system proposed by Stanislao Canizzaro, one early periodic system was the one proposed by A.-E.-B. de Chancourtois, whose ‘telluric screw’ did successfully group together elements with similar chemical properties into straight lines. Another who made great strides towards cracking the chemical code of elements was the British chemist John Newlands who arranged the elements by increasing atomic weight. Indeed, Newlands came close to the whole crux of the issue by noting that there was a periodicity underlying the properties of elements.

The German Julius Lothar Meyer came tantalizingly close to constructing ‘the’ periodic table. His table also listed the elements in order of atomic weight and he also noted that there was a periodicity to the characteristics of the elements. In fact, his table was strikingly similar to Mendeleev’s and save for the fact that Meyer published his periodic table one year after Mendeleev, Meyer’s name might be much better known today.

That honour instead goes to Mendeleev who hailed from Siberia and came from a large family with 16 siblings. After completing his university training in Saint Petersburg, he became an academic, and, as the story goes, wrote a chemistry textbook as he could find none that was suitable for his purposes. It was around this time that he too became obsessed with classifying the chemical elements. 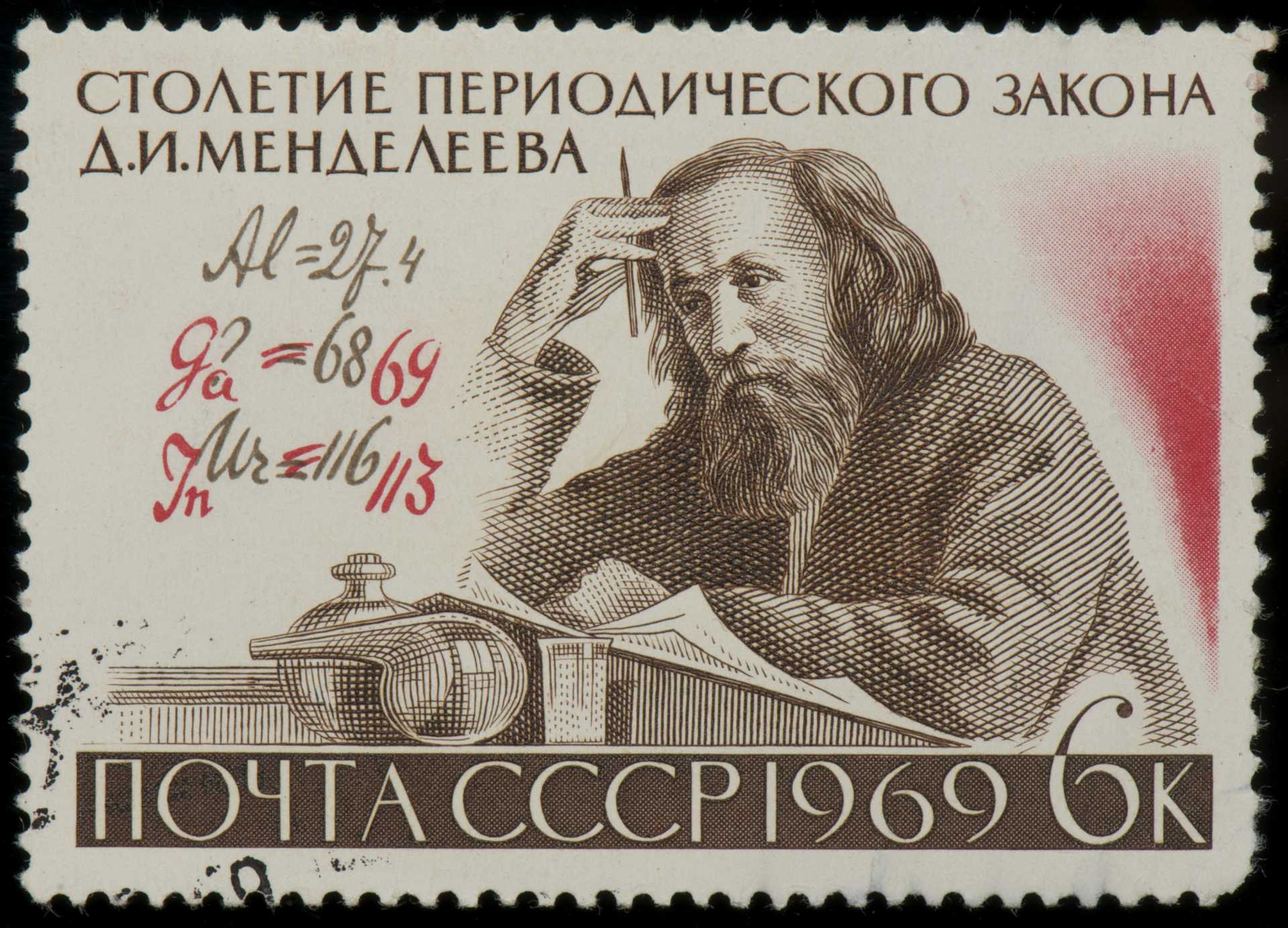 A commemorative stamp from the U.S.S.R. to mark the 100th anniversary of Mendeleev’s periodic table. © iStock/Veronika Roosimaa

Mendeleev’s table would surely not have achieved such renown if it was only a classification of the elements that were already known. The power of the table lies also in its predictive power. Like Meyer, he deliberately left space for additional, not yet discovered elements. However, unlike Meyer, he provided great detail about the properties of those elements, which, he suggested, could be predicted based on the principles of his table. Indeed, when these elements were discovered in later years, his predictions were found to be very prescient. Even more strikingly, a whole class of elements, the noble gases, were not even known when Mendeleev formulated the periodic table. Upon their discovery, a breakthrough for which William Ramsay was awarded the Nobel Prize in Chemistry in 1904, Ramsay realised that there was space for them in Mendeleev’s nascent periodic table. Mendeleev agreed and added them to a later version. The power of the table was also evidenced by the fact that Mendeleev himself realised that the properties of several elements could be better described by moving them to new positions from those indicated by their apparent atomic weights.

The full periodic table as we know it today was only finalised with additional important contributions from other scientists, most notably from H.G.J. Mosely, whose method to precisely measure atomic number contributed to resolving remaining uncertainty about the position of certain elements in the table.

All of this surely warranted a Nobel Prize for Mendeleev? Amazingly no, but he did come very close and was nominated for both the 1905 and 1906 prizes in chemistry. However, he lost out on both occasions, perhaps because his discovery was at that time already regarded as too old.