“We are beginning to understand...
Back
Two 2014 Nobel Laureates in Physiology or Medicine about childhood, dream jobs and the next big thing in neuroscience. What is your earliest memory as a child? John O’Keefe: That’s a very good question. I do remember a few things from the age of about three years old, when I interacted with some of my relatives. I remember spending a summer with my aunt and her children in New Jersey, and I remember when we used to go to Rockaway, in Long Island. So I have those memories, but they are separate memories, I do not have a continuous one. Edvard Moser: This is quite hard. Actually, I am not sure I know. I have many memories from my childhood, but I can’t really tell you which one is the earliest.   And what was your dream job at that time? JOK: Well, I think I would have been very happy to follow my father in his footsteps. He was a mechanic and he used to work in New York buses, at the public transportation system. When I grew up, that was a very good job and some of the kids I grew up with were very good mechanics, so I would have been quite happy to get that job. EM: Actually, I wanted to become a scientist from the very beginning: I read about scientists, I read about science and I wanted to do similar things. I did not know very much about what it was like, but I wanted to investigate, find out things, solve problems. And as soon as I was able to read, and I was five, that was all I wanted. 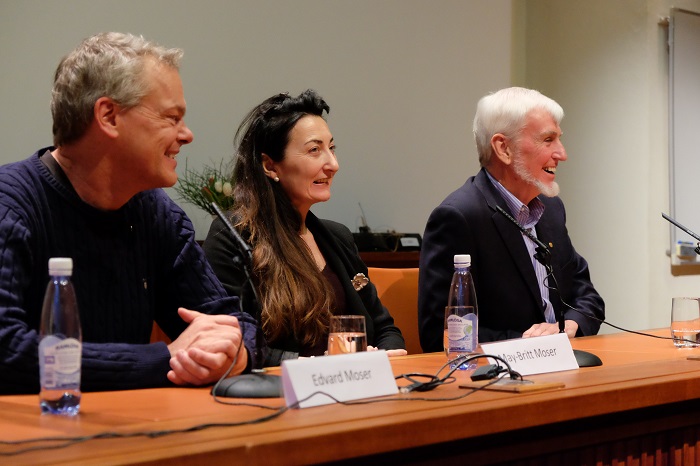 What will be the next paradigm shift in neuroscience, the next big thing? JOK: I think that what is happening now is the following: we are developing techniques by which we will be able to record many cells at the same time. We know something about how individual neurons work, but we will be able to record from hundred and thousands of cells at the same time using either optical techniques or electrical recordings techniques based on computer technology. We will also be getting the influx of very bright mathematicians, computational neuroscientists, and we are also able to manipulate the activity of cells to test very specifically whether they are involved. We can either remove them from the circuits, or we can actually include them in circuits where they were not involved before. I think we will begin to see concepts from the mathematician perspectives, which are really quite different from the ones that we have been used up to now, and I think that is going to be very exciting. EM: That’s hard to say, but I think we are entering an era where we are beginning to understand how cognition works in general terms. Space has brought us into this, but that is just the beginning. I think one of the aims can be to understand cognitive functions, like thinking, planning, decision-making, categorising. All these functions that have traditionally been studied in cognitive psychology can now being addressed experimentally in neuroscience. And neuroscientists are beginning to do this. And even language: the trick is that you can study small elements of language or of decision-making processes in rats or mice for example, so you do not really need to go up to primates and humans. And that means that all the technologies are available. In the field of cognitive neuroscience, which has to do with how thousands of neurons collaborate to do a function, that is where a lot of the progress will be.   What is the single most important lesson you have learnt in life so far? JOK: If you got a passion for something, pursue your passion, and do not worry too much if nobody else agrees with you. EM: I am not sure I have learnt any lessons! (He laughs) Not that I can think of. I believe in the way of doing science that we have followed, namely to have a long-term goal, being stubborn, not giving up easily, be patient. We have followed that course since the beginning: I do not regret at all the main aspects of how we have done things!   Image in slider: Gunnar K. Hansen, NTNU Comm. Div.