Erwin Neher: The Fascination of...
Back
Guestblogger and young neuroscientist Stefano Sandrone talked with Erwin Neher about dreams, the exploration of his childhood garden and winning the Nobel Prize. Our body is made of cells and the cells are surrounded by membranes separating the space inside the cell (i.e. intracellular space) from the external one (i.e. extracellular space). However, this separation is more similar to a wall with small and big gates than to a neverending fence with no openings. Every gate is called channel and each of these gates allows the passages of ions, namely charged atoms. The right functioning of these channels is pivotal to the functioning of the cells, and therefore to the right functioning of the whole body. Erwin Neher, along with Bert Sakmann, has refined the so-called patch clamp technique allowing scientists to record very small electrical currents passing through each single ion channel. Neher and Sakmann were therefore jointly awarded the Nobel Prize in Physiology or Medicine in 1991 for ‘their discoveries concerning the function of single ion channels in cells’.   Stefano Sandrone: Professor Neher, let’s talk about neuroscience and start with a simple question: What is the earliest Memory of yourlife? Erwin Neher: My earliest memory comes in pictures: it is a picture of a terrace in a house where someone is lifting me up in the air.    SS: What was your dreamjob when you were a kid? EN: I have changed several dream jobs, from being a priest to becoming a forester up to a scientist.   SS: In your autobiography on nobelprize.org, you wrote that your Family home was situated in a big park-like garden, in which you spent hours by yourself, watching plants and animals, and where you knew almost every pebble. Can you please tell us more about that? EN: I remember I explored that park-like garden a lot. I knew every little corner of it. I enjoyed just watching and observing what surrounded me as well as disassembling instruments and put them to work again. I was fascinated by how things worked – from the working of a clock to the mechanism leading a snail to find its way in the garden. 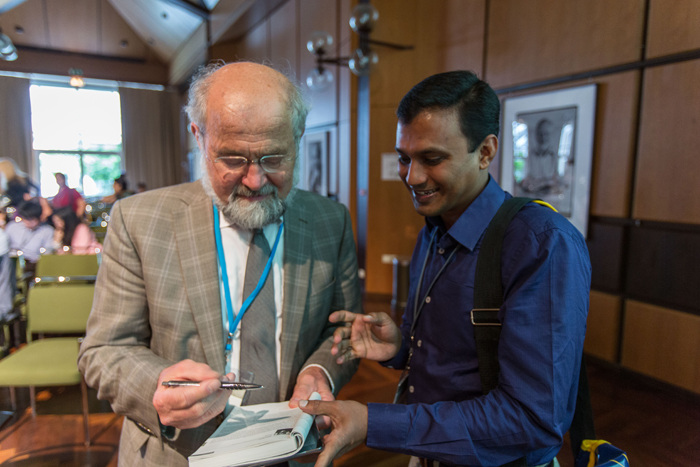 SS: How can you describe the excitement for a discovery? EN: Often you do not really realise what the consequences of a certain discovery are. In science, you have questions and you want to get the answers: sometimes you get them, sometimes you don’t. It is a mixture of nice feelings, a sequence of events and of reactions to these events. This excitement comes step by step. You have a goal, you are convinced of something when you get your first evidence, and then you have to further prove it, gradually.   SS: What are the most promising neuroscientific challenges of contemporary and future research? EN: I would divide them in two categories: Firstly, better understanding and secondly fighting neural and psychological disorder. These two categories are linked with each other. Specifically, the new optogenetics methods can provide us with a promising approach, therefore optimising the way these tools work is a challenge. Synaptic plasticity is a great research area: Seminal findings on this topic were made by pioneering studies by Nobel Laureate Bernard Katz in the 1950s, but even sixty years later we still do not have a complete biophysical understanding of what is going on. Important discoveries will come from a combination of experiments and computational neuroscience.   SS: What were you doing when you received the call from Stockholm? EN: I remember it was a Monday morning. I had just came back from a conference in Spain and was about to analyse some data from a collaboration with a colleague in the US. I started to have a look at them, but then… the telephone rang – and the data eventually had to wait for one more year before being analysed! 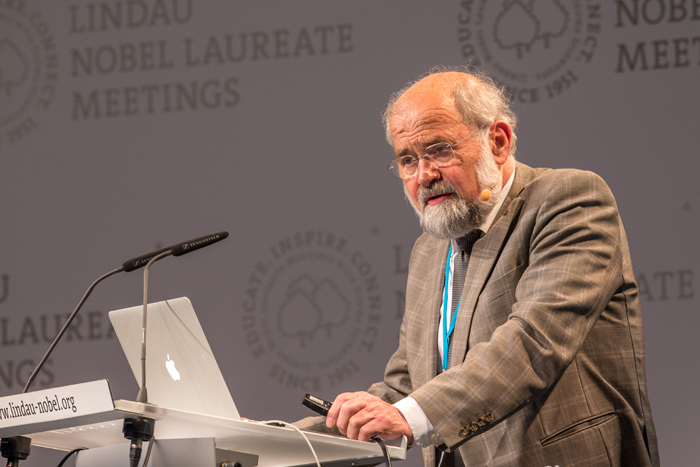 SS: Did your life change after the Nobel Prize? EN: Yes, it changed – but I think this is not very different from what other scientists who are leaders in their research field have to deal with. You have to subdivide your time and reserve some of it to run the lab and following up on your ideas, but you are also subjected to many external forces leading you towards many directions. Also, the Nobel Prize is awarded for the specific ability to find association between previously separate phenomena, but many people think a Nobel Laureate should be almost ‘capable of doing everything’, such as being good in politics, delivering speeches, convincing people, and all these things. Moreover, you learn to say ‘No’ in many cases as you always have to weigh your responsibilities. Society expects you to do good research, so you have to keep doing what you are good at.   SS: What is your advice for young researchers? EN: You need curiosity to solve problems. Find something that catches your mind and let that thing make you think intensively about it. Look constantly for answers to your questions. Science is about following your own ideas, being part of an international community with a common goal, having a job that is at the same time your hobby, and being very well organised. Time mangement is crucial.   Related Links: “Short-Term Synaptic Plasticity”, Erwin Neher’s lecture at the 64th Lindau Nobel Laureate Meeting Previous interview with Professor Neher on the Lindau Blog