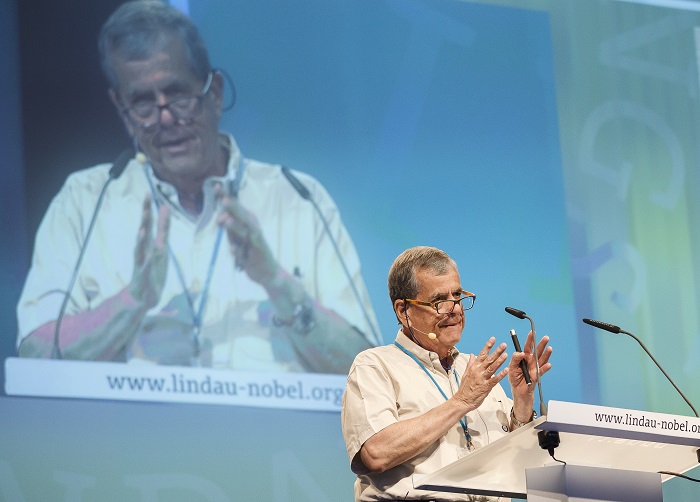 I know! AC: If people ask me what is the message of Lindau, I would say: ‘that it is possible’. Not to get the Nobel Prize, because you must be crazy to think about the Nobel Prize: there are many talented people that are not getting it, even more talented than Nobel Laureates. I have never meant to get a Nobel Prize, I was driven by curiosity. But it is possible doing something meaningful. Even for those who are growing in small countries with no resources: you need to be driven by yourself. If this message goes through, this is great. Because when I was growing up, I thought Nobel Laureates where like Spielberg’s E.T. But they are not like E.T.: they are human beings. Like us. Like everybody else.   Like you. AC: And I am not different from people walking in the street. And this message should pass through. You can influence society, and it is not necessary to be a Nobel Laureate: you can be a teacher, and your students will grow up to be leaders. You can be an architect, a sculptor, a musician, a painter, you can be anything. Living for seventy or eighty years just driving the car and going to the grocery is like…boring. Why should we do it? It is a waste of time. It is like spending eighty years of life by doing nothing.   You never thought about winning the Nobel Prize, right? AC: It is too big. I have never lived in my life to win a prize. And it must be crazy to do so: if you drive yourself to win prizes, I think you will never get it, as you are busy thinking about it. And secondly, this is a bad way of living life.   Can we say that the best accolade are the results itself, what you get in the laboratory and satisfy the curiosity (and then the Prize, of course)? AC: It is the secret of nature: it is fantastic. We discovered a system that nobody knew before, a major, big system. Now people applied this knowledge to medicine, and see patients and physician doing so: this is wonderful. I walked out from medicine and then if I see myself back in the back door. It is really fantastic.   The dream of the young Ciechanover actually came true. AC: Yes, then I became a physician from the back door! I am not treating patients, but I am certainly into diseases. All this came via the science. It is not the Nobel: the Nobel is the culmination of an effort. Because the achievement was the reward, and the Nobel was given for the achievement. The achievement is not the Nobel, the achievement is the science. It is fun to be a Nobel Prize, I am not sorry for it. But it is recognition by society, it is not an achievement in science, it is not a discovery. Again, it is nice to be a Nobel Laureates, a kind of so-called celebrities, but that is not the issue. I have been living many years before winning the Nobel Prize and doing science and nobody really cared about me, but I tremendously enjoyed doing this. And I still enjoy it! Because this is what I do everyday, at the end of the day, or when I get up in the morning. Yesterday morning, for example, I went to the lab, not to celebrate the Nobel Laureates.   And this is what really matters: enjoying what you do. AC: No doubt at all.