“The laureates enjoyed to reveal...
Back
Volker Steger had an unusual idea: he asked Nobel Laureates to draw their respective topics, then he photographed them with their sketches. An exhibition of these remarkable images has already travelled around the world. Tim Hunt was one of the first to be portrayed by Steger. He recalls his experience in the exhibition’s catalogue: “These people had been ambushed! Yet the subjects mostly look very pleased, happy to share their knowledge and understanding with a wider audience. Would they have looked as happy if they had been warned beforehand? (…) What the photographs mainly seem to radiate is the fun of doing science.” 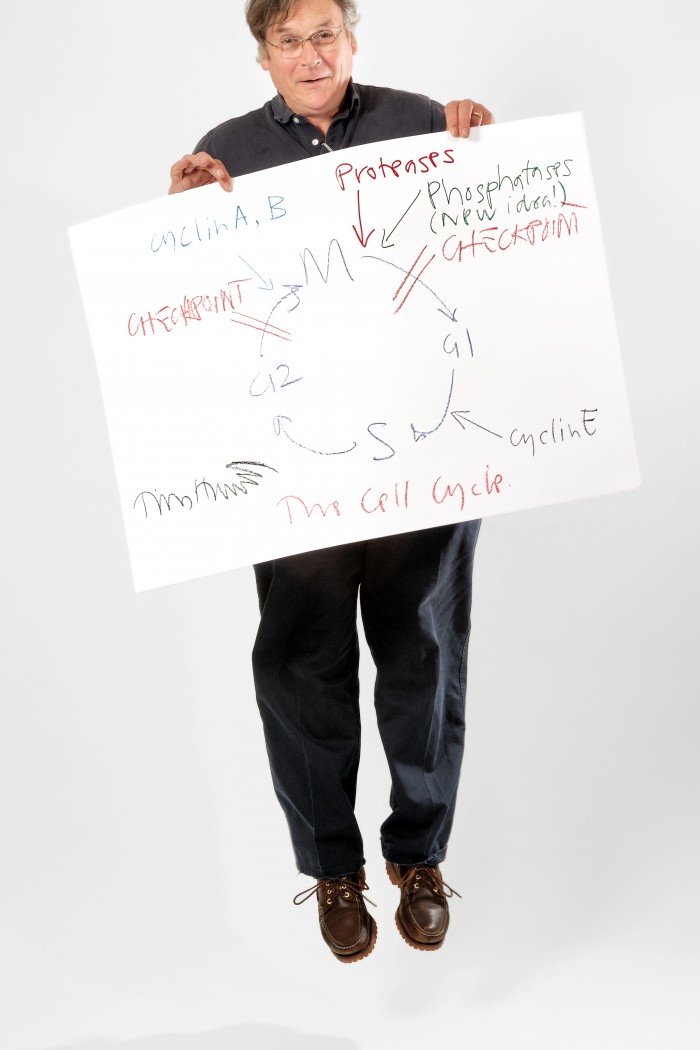 Sir Richard Timothy „Tim“ Hunt received the Nobel Prize in Physiology or Medicine in 2001 for discovering protein molecules that control cell division, together with Paul Nurse and Leland Hartwell. He has supported the “Sketches of Science” project from the start. Photo: Volker Steger

Mr Steger, what can you tell us about your photo session with Tim Hunt? He is a great guy, funny and full of humour. And he understood immediately what I wanted to achieve. He is very interested in portraying Nobel Laureates a bit differently, to present them in a different light – to demystify them, perhaps. Let me give you one example: his official name is “Sir Timothy”, he has been knighted like all British Nobel Laureates. But he doesn’t care much about his title, he is “Tim Hunt” to everybody, or just “Tim”. Looking at his photograph, you can see that he had a lot of fun during our session, he even jumped into the air, and I captured this very moment. He is also one of the very few laureates who became a friend, and he has attended several exhibition openings of the “Sketches of Science”, that’s my project’s name. This was more than six years ago. In the meantime you have asked almost ninety Nobel Laureates to draw. How did the nice portrait of Elizabeth Blackburn come about? Well, she was completely tired out, she had come on a red-eye flight from Australia. The first thing she said was, “Lots of caffeine for me, please!” She was a bit early, coming to my improvised studio while I was still shooting pictures of Oliver Smithies. So she drank her coffee and watched us work. Apparently she drinks lots of the stuff, which surprises me – I haven’t met another laureate who watches her work-life balance as closely as she does. Incidentally, that is her scientific topic: studying ageing on a molecular level. In her research, she was able to show how a person’s life style can alter his or her genes, or more precisely the telomeres. I think this is a most astounding field of research. I’m a biologist myself, and I always try to understand what the researchers are doing. But back to Elizabeth Blackburn: she can draw very well, and I think her photo shows that she had great fun doing it, despite being excessively tired. 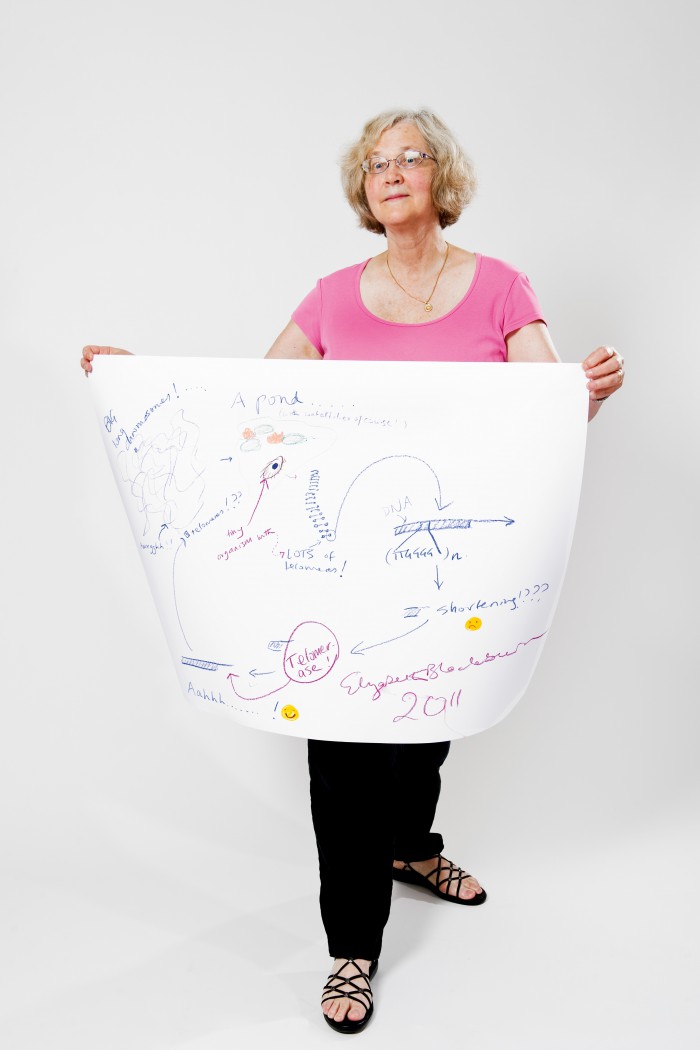 Elizabeth Blackburn is an Australian-American molecular biologist. She received the Nobel Prize in Physiology or Medicine in 2009, together with Carol Greider andJack Szostak, for the discovery of telomerase, the enzyme that replenishes telomeres at the end of each chromosome. Photo: Volker Steger

How did you get the idea for this project in the first place? The idea was born while I was bicycling. But of course there is a longer story to it. I had an assignment to portray Nobel Laureates in Lindau for an Italian science magazine. A press relations lady from CERN was to pose the questions, an altered Proust Questionnaire, but in a version adapted to researchers. So instead of asking, “What military event do you admire the most?“, it asked, “What would you have liked to invent?” My job was to portray each and every one in the same chair and pose. As I prepared for my trip, I kept having this nagging feeling of a wasted opportunity. I had been to the Lindau Nobel Laureate Meetings before as a young photographer’s assistant, and I had gotten the impression that this was a place where you could try something new. So after I had my idea, I went out and bought some large white canvasses and borrowed some wax crayons from my small daughter. My assignment in Lindau went as planned, but due to the setup, we finished quickly with each laureate. This was my opportunity and I asked: “Have you got a few minutes to spare?” Next, I gave each laureate a canvas and crayons and asked them to draw the topic they had received the Nobel Prize for. Now this took off like a rocket! I was also very lucky to have people like Tim Hunt in the first batch of laureates. During the next years, a small number of laureates refused to participate. If these had been the first ones – the project would have probably died. 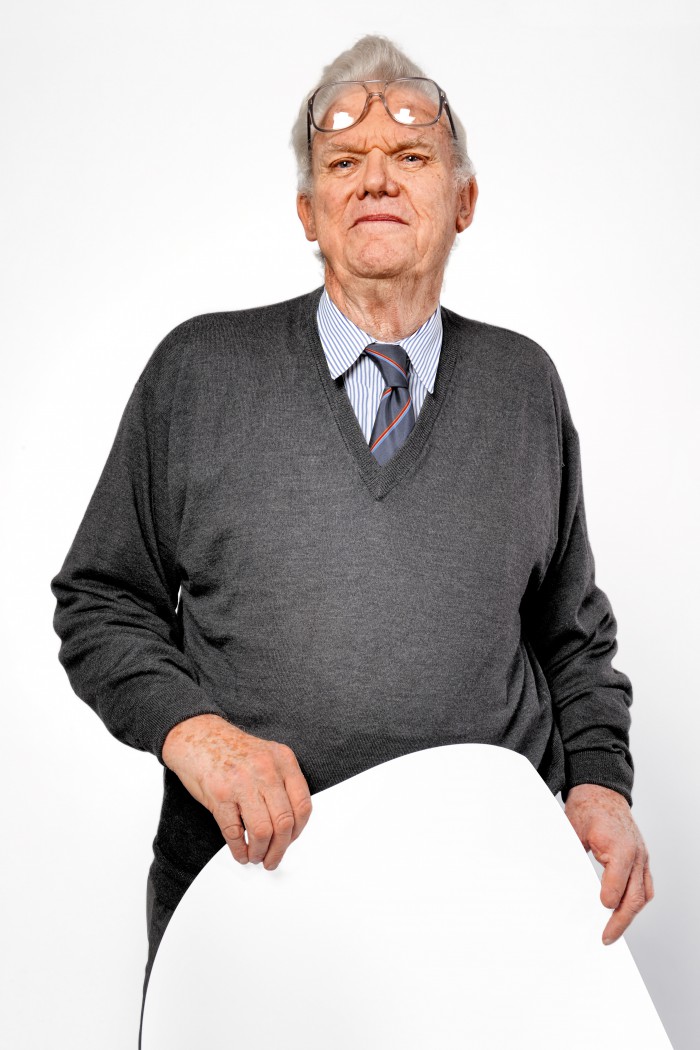 “Richard Taylor had a bad day and didn’t feel like drawing. He didn’t even want to sign the blank sheet, but he agreed to be photographed. ‘Am I the only one with an empty sheet?’ he asked.” Steger’s commentary: “I think I won’t allow another blank sheet, but one was okay.” Richard E. Taylor won the 1990 Nobel Prize in Physics. Photo: Volker Steger

How many laureates have refused to cooperate? Not very many, I can only remember three. One said he was too old to draw, later I saw that he showed signs of Parkinson’s disease. Another said he couldn’t draw for the life of him, a third didn’t want to have anything to do with an “artsy” project. A unique experience was my meeting with Aaron Ciechanover. First, he came into my improvised studio with several people, some of them family members. When I finished telling him about my project, he said, “No, this won’t work! My work is so dynamic, it has to be on video, not just still photographs!” I patiently explained that filming was not an option today. Finally he asked for a bottle and a glass of water and wrote a poem on the ever-changing nature of the human body:

Our body is dynamic. It is ever changing. The secret of body dynamics is a miracle: it is like a water cup from which we drink but it never empties.

So he effectively turned our photo session into performance art! 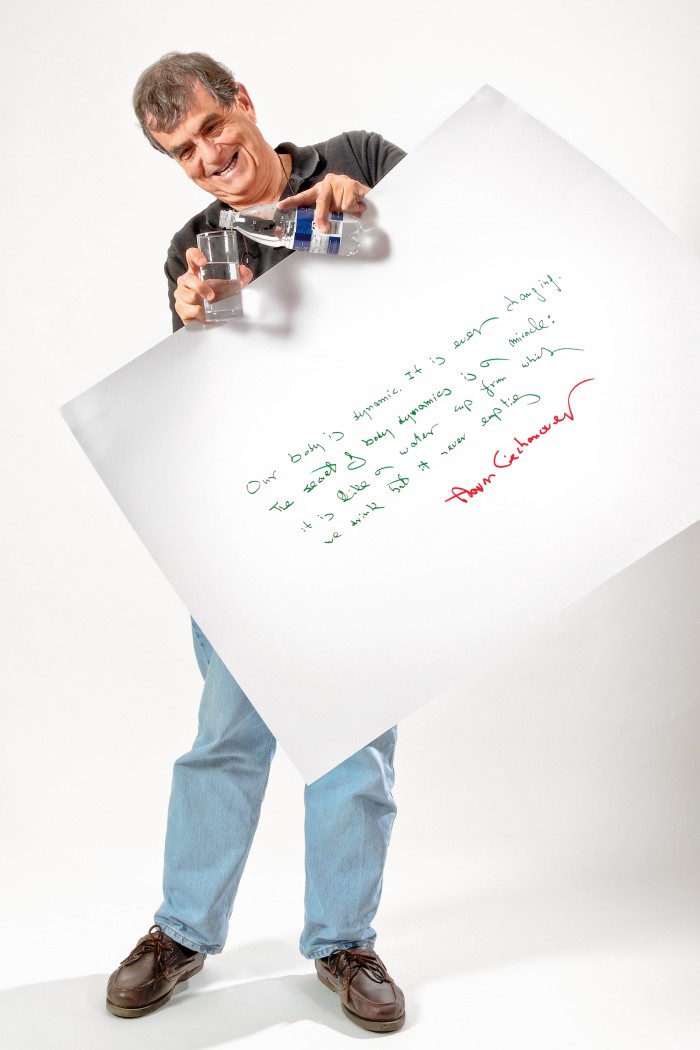 Aaron Ciechanover refused to draw because he thinks his work is too dynamic for a mere sketch. So he asked for a bottle and a glass, wrote a little poem and turned the photo session into a performance on the ever replenishing power of the human body. Photo: Volker Steger

During your project, what have you learned about Nobel Laureates? My own private research question was, “Are there any common traits among Nobel Laureates?”, or, “Does anything distinguish them from the rest of humanity?” Now, after so many years and sessions, I have my answer: the prize is the one single commonality, and that’s where similarities end. The laureates are very unique, individual people. But of course they have one experience in common – receiving the Nobel Prize. And from that moment on, they naturally share certain experiences. Let me give you one example: When someone wins this prize, more often than not, all corrective feedback stops. Many laureates are nice, funny and down-to-earth by nature, with or without the prize, and this lack of dissent cannot change them much. But I think that you need a lot of inner strength to remain the same person in an environment that doesn’t talk back anymore. Your photos mostly show laureates that seem to be enjoying themselves. How can you explain this? First of all, getting an assignment they have to complete is something they are quite used to. And since all laureates are professors, most of them can draw because they often have to present and explain their findings. But while doing this, they often don’t have great degrees of freedom. In my photo sessions, they enjoyed the chance to reveal a little bit about themselves. Normally, they are in an ambivalent situation: their professional environment treats them like pop stars – but nobody recognises them on the street. I also think that the sketches help them to present themselves as individuals – they don’t have to stand in front of the lens “empty handed”. It almost seems to me as if I gave them the permission to “play”, to leave their defined role behind and to create something. Most of them enjoyed that tremendously. 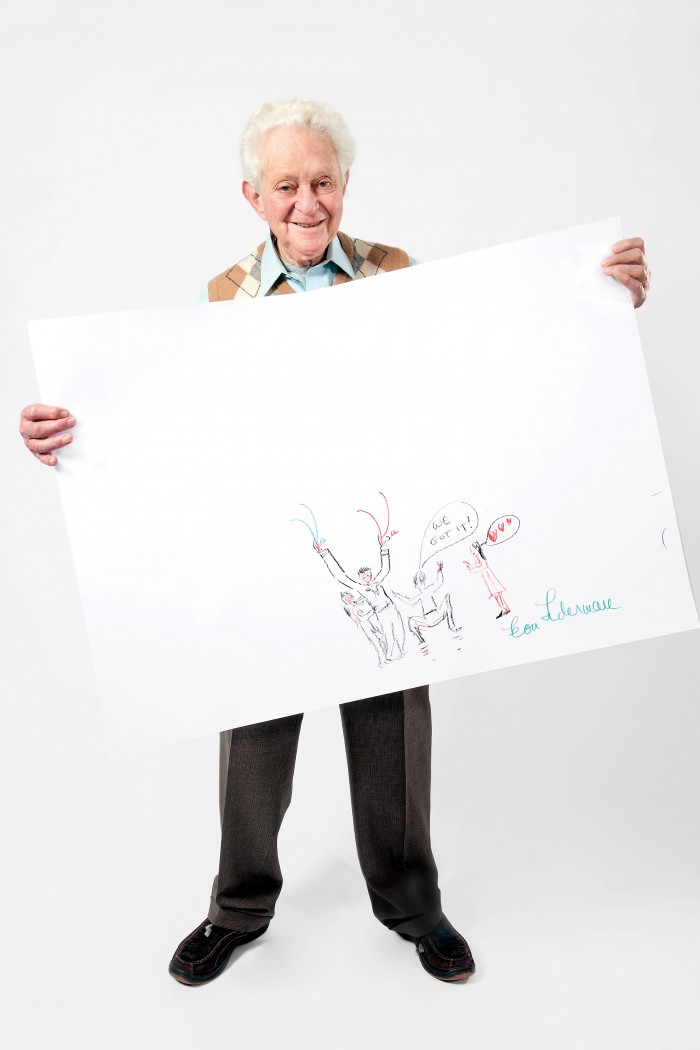 „Leon Lederman was the only laureate I photographed who broached the subject ‘I have won the Nobel prize!’ Look at the lady on the right and at the red hearts: He met his current wife at a Nobel prize party.” Lederman received the 1988 Nobel Prize in Physics. Photo: Volker Steger

Your pictures also show a certain need to “stand apart”, for instance to hold the sketch in a unique way. How strong is this need among laureates? Yes, this need is definitely there, not in every laureate but in many. One of the most frequent questions was, “Has anybody done this before?” Now what should I respond to that? Should I say, “Yes, three have done that before,” or, “No one has thought of this before, you’re a genius”? Usually I didn’t say anything and just kept taking pictures. One fact really surprised me: the laureates don’t seem to talk much among themselves. This is not only true when it comes to my project – at the Lindau Meetings, I have noticed that they are more often surrounded by young scientists than talking among each other. Somehow I had expected more communication amongst the laureates. What was important to me in my studio situation: the impulses had to come from the laureates themselves. Of course, if someone doesn’t know what to do, I make suggestions to walk a bit, to turn around or to hold the sketch higher. But if a laureate hides behind his drawing, or bites into it, or wraps himself in it – these are all their very own ideas. How long do you plan to continue your project? Well, my personal goal are one hundred sketches, but I don’t know whether that will happen. Maybe the number 89 is nice too. The exhibition of my photos has already travelled through Europe, Asia, and opened in Davis, California last week. The Nobel Foundation in Stockholm has “adopted” it, and the German Tschira Foundation helps financing it. And I’m still visiting Nobel Laureates in their labs, taking pictures and making videos for for the Nobellab format. And while I’m there, I ask the laureates to draw – many nice sketches and photos still come about this way. 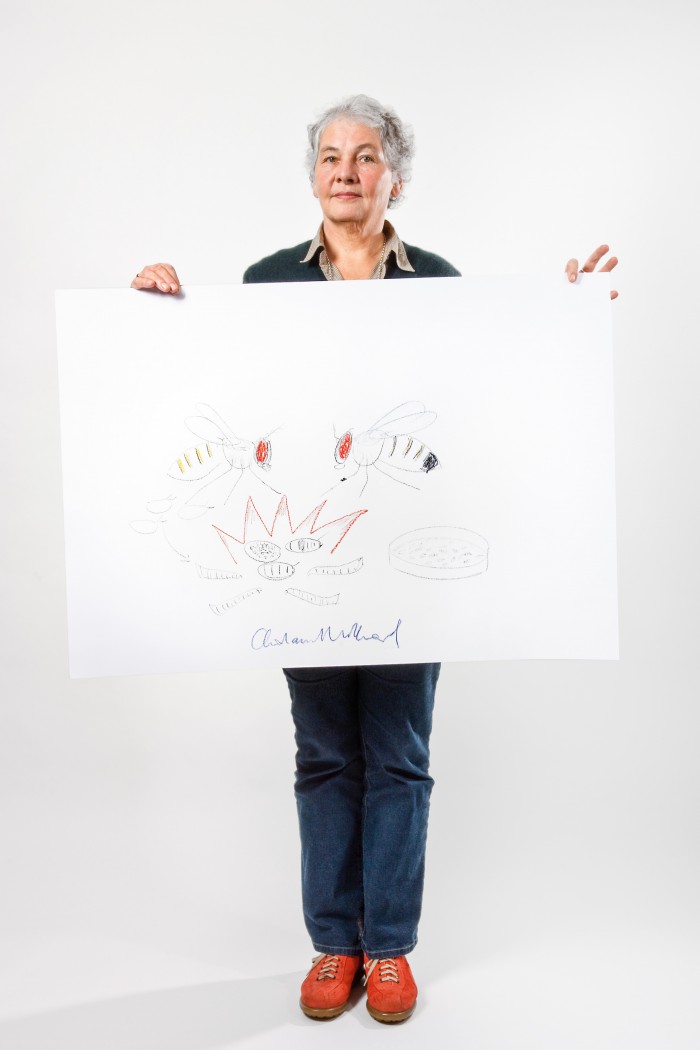 “Ms Nüsslein-Volhard said to me: ‘It would have taken up more of my time to get rid of you than to just do the drawing and the pictures!’ That’s probably the most dubious compliment I’ve ever received. It turned out that she can draw very well, she even illustrates all of her books.” Christiane Nüsslein-Volhard received the 1995 Nobel Prize in Physiology or Medicine. Photo: Volker Steger