The Future Belongs to Women...
Back
Christine Gorman about Hans Rosling’s impressive Presentation at the Opening of the 64th Lindau Nobel Laureate Meeting. For the first time in its 64-year history, a prestigious, invitation-only meeting of young scientists and Nobel Laureates is made up of more women than men. Between 3,000 and 4,000 graduate and post-graduate students in science applied to attend the Lindau Nobel Laureate meeting, held every year in a picturesque Bavarian town near the southern tip of Lake Constance in Germany. “This year, for the first time, more young women than men have qualified” for the coveted 600 spots, Countess Bettina Bernadotte told participants at the opening ceremony in Lindau, Germany. But that was probably not the most surprising thing most people learned this afternoon. More surprising was that even this highly educated group did not do so well on a pop quiz about some basic facts about global health. Before you make any snide remarks, realize that their answers were in line with those given by citizens of the U.S.,U.K. and Sweden as well as some of Rosling’s fellow professors. In fact, the only group that scored better were a bunch of chimpanzees at a Swedish zoo, who, because they answered randomly, were not influenced by preconceived ideas of what the world is like. 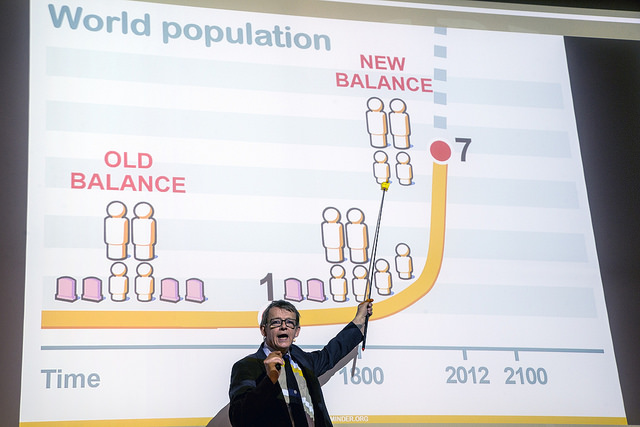 Hans Rosling, the always entertaining and informative professor of international health at the Karolinska Institute in Sweden, posed four questions of the audience. Thanks to the interactive clickers available to all participants, we quickly discovered that less than 10% of the dignitaries, scientists and budding scientists knew that 80 percent of all children around the world are vaccinated against measles (most guessed either 20 percent or 50 percent) or that the number of children that will be born in the coming decades is actually not expected to grow significantly beyond the number that are currently born. (It’s the number of adults that is going to shoot up, boosting world population to 9 billion by 2050, up from 7 billion now.) A greater number of participants came up with the correct answer for the other two questions, but the gap between perception and reality was greatest for measles vaccination and projected number of children. The point, as Rosling explained, was not to embarrass a bunch of scientists, but to help them to realize some of the very strong cognitive biases that still hold sway whenever we talk about the next 50 to 100 years of life on earth.  “If you score worse than random, then the problem is not lack of knowledge,” Rosling told the audience. It is about why the perception of the world divided between “developed” and “developing” countries refuses to budge from so many perceptive people’s fundamental understanding of the world. Who do you think scores better than the chimpanzees when Rosling’s performs this pop quiz? The CEOs of international companies. You can read more about Rosling’s quizzes in this BBC News article. This article originates from Scientific American’s Observations. Courtesy of Christine Gorman.