What a Ball of Wool...
Back
Seeking for objective measures that indicate how healthy you are. Doctors can perform plenty of tests to tell you how sick you are. There are certain agreed-on measurements of blood pressure, glucose levels or biomarkers to define illness. But what are the objective measures that indicate how healthy a person is? For that matter, what sort of test can you do to reliably indicate that someone is a healthy 60-year old, 70-year old or 90-year old—other than listing all the diseases that they don’t have? This seemingly philosophical question—how do you define healthy aging?—became something of a running theme over the past two days at the Lindau Nobel Laureates meeting, in two science breakfast talks that were sponsored by Mars, the confectionary and pet food company. 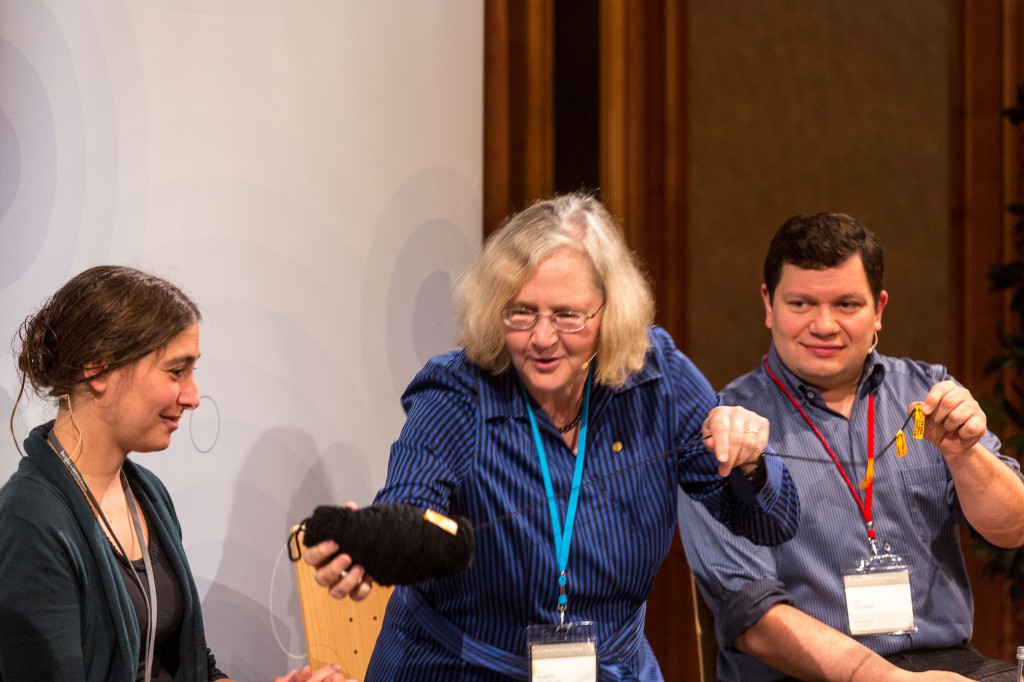 “When we think of biomarkers, a lot of us trained as we are, we think of molecules like cholesterol,” said Elizabeth Blackburn, who shared the Nobel Prize with two other researchers in 2009, “for the discovery of how chromosomes are protected by telomeres and the enzyme telomerase.” In the years since then, a growing amount of research has linked the shortening of telomeres to the aging process—as either a cause or an effect. But biomarkers include the term “bio,” Blackburn pointed out, which covers more than just molecules. Many clinicians use “grip strength,” for example to test how frail an older person is. “That’s a biomarker; it’s measurable,” she said. But of course, it is used more often to identify frailty (illness) rather than strength (health). Telomere length is one possible, quantifiable marker for defining healthy age. But although Blackburn didn’t say this in so many words, researchers still need to know a lot more before doctors can start performing telomere tests on their patients. Among the scientific obstacles that investigators need to consider is the fact that luck plays a not-insignificant role in how long anyone lives. Okay, she didn’t actually use the word “luck.” What she actually said was that any reasonable definition of aging would have to include “a stochastic notion of the process.” But basically, that’s equivalent to saying you have to account for the life that some events in life are random. To illustrate the point, Blackburn asked the group to consider a particular species of worm that scientists use to study aging in the laboratory. “If you take a group of C. elegans, all genotypically identical . . . allow them to grow and then ask ‘When do they die?’ they don’t all die on Tuesday three weeks from today.” Some die earlier, some die later. But the don’t all drop dead at the same moment—and yet no one currently can reliably predict which of these genetically identical worms raised in identical environments will perish first. Another knotty problem: you cannot simply extrapolate the timing of key molecular events from the life of the laboratory animals that typically are used to study aging—the worm (C. elegans), fruit fly, yeast mother cell and mouse. You also have to account for the passage of time; for the fact that people can live eight or nine decades or more. Blackburn then surprised everyone by tossing a skein of black yarn into the audience that had been proportionately tagged to show the longest lifespan of C. elegans, fruit flies, yeast mother cells and mice. Amidst lots of laughter as particiipants continued to throw the unraveling ball of wool  around the room, the nature of the problem became abundantly clear. Check it out for yourself in the 3-minute video below. This article originates from Scientific American’s Observations. Courtesy of Christine Gorman.