Could A Cow Virus Cause...
Back
Repost: Christine Gorman on Harald zur Hausen’s cancer research. The remote possibility that I might develop mad cow disease as a result has never stopped me from diving into a nice juicy hamburger (preferably with a generous helping of ketchup and relish). But that was before I heard Harald zur Hausen hypothesize that a cow virus might be responsible for most cases of colon cancer. And why should anyone pay attention to what Harald Zur Hausen thinks? Well, he won a Nobel Prize in 2008 for proving that most cases of cervical cancer are caused by a few strains of Human Papilloma Virus (HPV). Nor is HPV the only viral cause of cancer. Chronic infection with certain hepatitis viruses, for example, is a major cause of liver cancer. Zur Hausen provided some intriguing factoids to support his idea at the 64th annual Lindau Nobel Laureates Meeting in Lindau, Germany. But he certainly does not have a smoking gun (nor did he claim to). Still, he could not resist tweaking the “cancer is genetic misregulation” crowd, including perhaps J. Michael Bishop, who gave a talk the day before, entitled “Forging a Genetic Paradigm for Cancer.” “The common idea is that human cancers occur because of an imbalance between proto-oncogenes and tumor suppressor genes,” zur Hausen told the audience of 600 young scientists who had won a competition among 3000 to 4000 applicants for the honor of attending the meeting. “That viral infections can cause cancer is a great disturbance to this beautiful picture.” Of course, zur Hausen concedes that genes play a role—even in cervical and liver cancer. But those tumors will not take hold for the most part without the viral infection having occurred in the first place. A viral cause for colon cancer? Zur Hausen’s intriguing line of evidence consists mostly of provocative questions that take on the received wisdom—questions that he is more than willing to follow with further investigation of the sort that will eventually prove his hypothesis right or wrong. For example, the received wisdom is that the connection between red meat and an increased risk of colon cancer has something to do with the number of heterocyclic amines that form during the cooking of red meat. And yet, zur Hausen reported, “fried, grilled or smoked fish or chicken actually have the same or higher concentration of heterocyclic amines as red meat.” In other words, why would heterocyclic amines be a problem for one kind of cooked meat, but not another? Then zur Hausen relayed the curious fact that the country of Mongolia has very low colon cancer rates, but it also has highest meat consumption per capita of any country in the world. Perhaps the fact that Mongols eat mostly yak, mutton goat, canned meat and horsemeat has something to do with the apparent mystery. 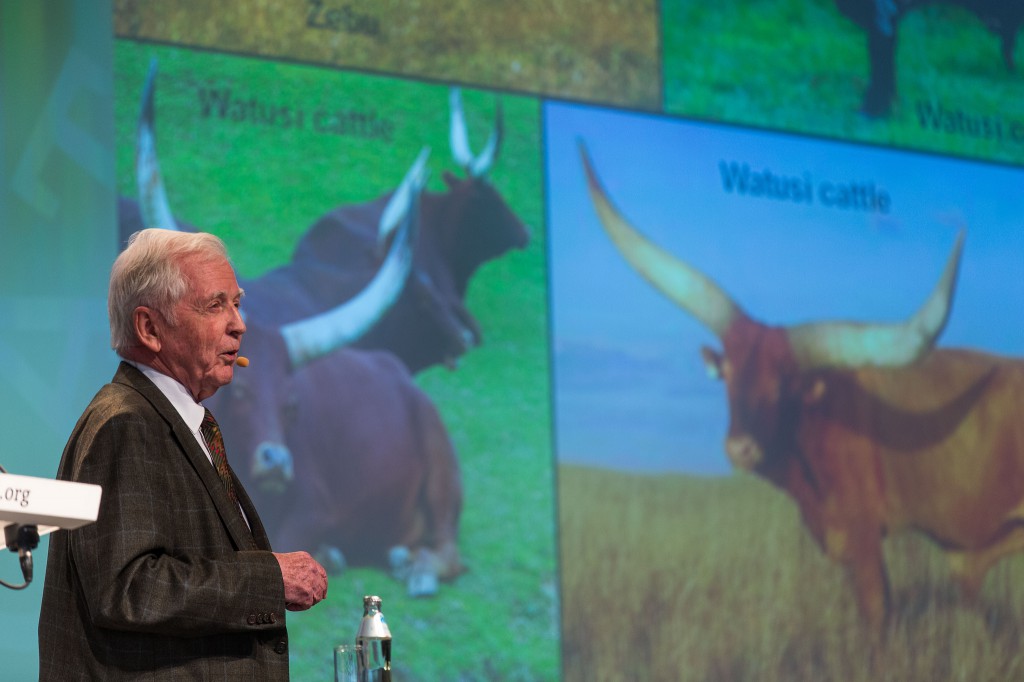 Colon cancer incidence is relatively low in India (where vegetarianism is quite prominent), some Arabic countries (where goat is more common) and Bolivia as well, zur Hausen said. The Bolivian situation is a bit complicated by the fact that so many of the beef cattle there appear to be mixes from different species. The evidence suggests to zur Hausen that the risk factor for colon cancer in red meat has to do with the Bos taurus species of beef—the most common around the planet. Perhaps, he posits, there an undiscovered virus that is causally involved in human colorectal cancer with respect to raw or undercooked red meat (beef especially). So far, his lab has found 18 different genetic sequences that might be evidence of a viral culprit. “But I don’t want to talk to talk too much about the identity of these virus or virus isolates because it’s under active investigation,” he said. At this point, the bovine virus-colon cancer link is clearly more speculation than science, but zur Hausen wasn’t done yet. As his talk was winding up, the Nobel laureate added yet another wrinkle to his mix of provocative hypotheses. Breast cancer, he noted, is one of the few cancers in which immune suppression results in a DECREASE in its incidence. There are plenty of potential reasons why that might be the case—but one possibility is that breast cancer, too, might have a viral component. And sure enough when zur Hausen compared breast cancer and colon rates in Bolivia, Mongolia and India, he found they tracked each other—not absolutely identically—but in a very similar way. His best guess is that if there is viral agent responsible for breast cancer, that it may be related to but not the same as the one for colon cancer Oh dear, another reason (besides increased risk for heart disease and food poisoning) to avoid hamburgers, especially if they’re medium rare. This article originates from Scientific American’s Observations. Courtesy of Christine Gorman.