Revealing the Secrets of Membrane...
Back

2.3 billion years ago, “the probably most significant extinction event in history” took place. This is how Hartmut Michel starts his 2015 lecture in Lindau, describing the Great Oxygenation Event, or GOE. What happened so early in the history of life? Ancestors of today’s cyanobacteria developed photosynthesis, a process that uses energy from sunlight, water and carbon dioxide to produce carbohydrates. Today, photosynthesis is considered “the most important chemical reaction on earth”, providing food for humans and animals, releasing oxygen for them to breathe – and millions of years later, this process provides fossil fuel in the form of oil, coal and natural gas, as Michel likes to point out.

But for the earliest single-cell organisms billions of years ago, free oxygen was a toxin. If they couldn’t somehow deal with large amounts of it in the atmosphere, as well as with the subsequent molecules from the ‘reactive oxygen species’ ROS, they died. One very effective way to ‘deal’ with free oxygen is the production of ‘oxygen reductases’: proteins that reduce oxygen to water, and simultaneously conserve the energy inherent in this chemical reaction. For more than the last ten years, Hartmut Michel has studied different oxygen reductases at the Max Planck Institute of Biophysics in Frankfurt, where he became director in 1987. One year later, Hartmut Michel was awarded the 1988 Nobel Prize in Chemistry “for the determination of the three-dimensional structure of a photosynthetic reaction centre”, together with Johann Deisenhofer and Robert Huber. More about photosynthesis in a minute. 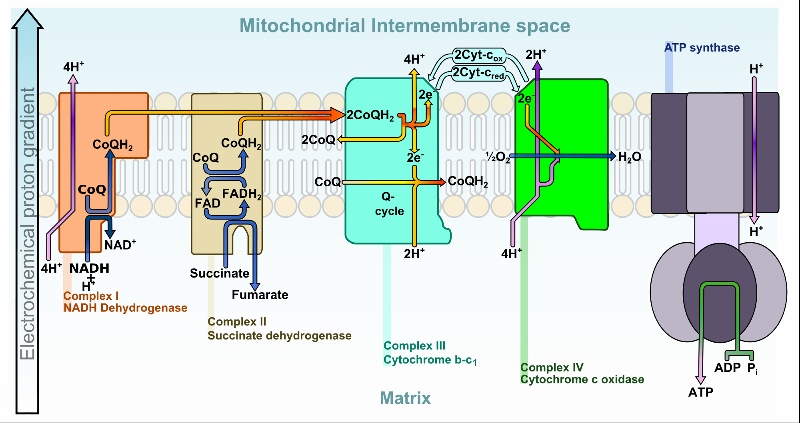 The electron transport chain in the mitonchondrial intermembrane space. Cytochrome c oxidase is part of Complex IV. Graph: T-Fork, based on graph by LadyofHats, both public domain

In recent years, Michel and his research group mainly studied two types of oxygen reductases: the so-called superfamily of ‘heme-copper oxidases’, and the ‘cytochrome bd oxidase’. All of these oxidases are located in membranes and are thus called ‘membrane integrated terminal oxidases’. A famous example from the superfamily is cytochrome c oxidase, the last enzyme in the respiratory electron transport chain located in the mitochondrial membrane (see graph). It receives one electron from each of four cytochrome c molecules, transfers them to an oxygen molecule, converting molecular oxygen to two molecules of water. It also helps to pump the protons, which the ATP synthase needs to make ATP, across the membrane: “the general energy currency of life”, as Michel explained in his 2015 Lindau lecture. Did you know that your body produces an astounding amount of 70 kg of ATP every day to provide ‘fuel’ for its many processes? These include breathing, digesting and maintaining body heat, etc. 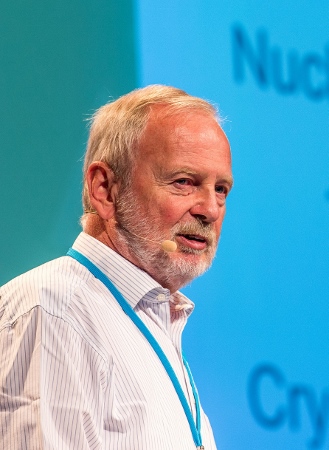 Interestingly, many oxygen reductases seem to have developed before the GOE. If this holds true – what were their functions? This is a ‘paradox’ that researchers haven’t solved yet. Another astounding result of Michel’s research is the fact that the two forms of oxygen reductases that he studies have many similarities, despite their structural differences: for instance, they both transport four electrons simultaneously, thus preventing the formation of ROS. “So obviously, the same mechanism was invented twice by Mother Nature,” Michel concludes in his lecture.

The photosynthetic reaction center is a membrane protein as well – the very first membrane protein whose structure could be elucidated. When Michel studied biochemistry in Tübingen and Würzburg, textbooks stated as an irrevocable fact that membrane proteins could not be crystallized. Since x-ray crystallography was, and still is, the best way to reveal the molecular structure of proteins, neither their structure nor their function could be determined without crystallization. Incidentally, many Nobel prizes were awarded in the last 100 years for developing x-ray crystallography.

But Hartmut Michel didn’t accept this scientific consensus. One major obstacle in crystallizing membrane proteins was that they are actually membrane proteins and lipids together, meaning the membrane is partly hydrophobic and it is thus impossible to create an aqueous solution. To solve this problem, detergents were needed, but they tend to form large micelles that can obscure the protein within. Finally, Michel found a fitting detergent, Heptan-1,2,3-triol, that forms smaller molecule clusters. Now, he had to decide on a membrane protein: He finally chose to work with the purple bacterium Rhodopseudomonas viridis, the name meaning “a red pseudo cell that is green”. These bacteria are capable of photosynthesis, like many plants, and their reaction centre could be isolated. 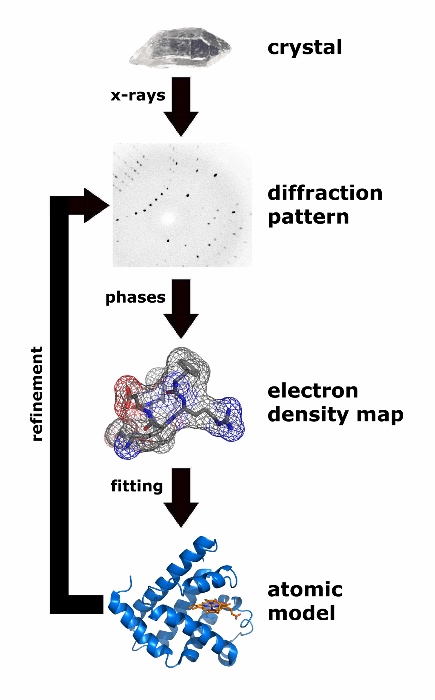 Determining protein structures with the help of x-ray crystallography is a very elaborate process: first, the protein needs to be crystallized, and this is very difficult with membrane proteins. Next, x-rays reveal a diffraction pattern that’s transformed into an electron density map with the help of advanced calculus. Finally, the protein structure is derived from this, again with advanced mathematics. Graph: Thomas Splettstoesser, www.scistyle.com, CC BY-SA 3.0

Johann Deisenhofer and Robert Huber provided the mathematics required for the elucidation of their atomic structure. The researchers first published their results in 1985, and received the Nobel Prize in Chemistry for this finding only three years later. In the early 1980s, it took Michel about four months to create an entire data set (see graph on right). Nowadays, one set can be created within seconds. Since their first publication, the atomic structures of more than 600 membrane proteins have been identified. Only about 50 of these are human membrane proteins – but there are several thousands in total! So there’s still a lot to be done.

Hartmut Michel is a committed supporter of the Lindau Nobel Laureate Meetings: he visited them twenty times, seven videos of his lectures are available here, and he’s also a member of the meetings’ Council. We’re looking forward to welcoming him in June 2017 at the 67th Meeting dedicated to chemistry.