How Positrons Can Help Explain...
Back

To search for dark matter with the help of antimatter sounds like something from a science fiction movie. But that’s what the Alpha Magnetic Spectrometer AMS was designed to do – and will do for many more years to come. Located hundreds of kilometers above the earth’s surface on the International Space Station ISS, this particle detector is the station’s largest experiment. The unique instrument is the brainchild of Nobel laureate Samuel Ting, who wanted to study the charged particles in cosmic rays and still is the experiment’s principal investigator. This week Ting gave a lecture at the 66th Lindau Nobel Laureate Meeting:

Let’s take a step back and look at the basic questions: What is dark matter? Why are we studying it? Even though I’m ‘juggling’ with these numbers all the time, it’s still mind-boggling that we can see only about five percent of all matter, the so-called baryonic matter that includes absolutely everything we see and know about: planets, plants, people, stars – everything. But many gravitational effects show that dark matter and dark energy need to exist, they are important cornerstones of the standard model of Big Bang astronomy, also called Lambda cold dark matter model, or ΛCDM. Since dark matter neither emits nor interacts with electromagnetic radiation, so we cannot see oder detect it with conventional methods.

The standard model also assumes that when the universe was created, an anti-universe was created at the same time, containing anti-particles like antiprotons, antielectrons etc., in short: consisting of all kinds of antimatter. And before this sounds like another science fiction story, the first particle from this mysterious anti-universe was discovered in 1932 by Carl David Anderson, who received the 1936 Nobel Prize in Physics for this discovery. The positrons he detected are basically antielectrons, i.e. electrons with a positive electric charge. On earth any positron venturing this far would be immediately anhihilated by an electron – that happens when matter meets anitmatter, and this is why naturally occuring positrons can only be observed in space.

As the name ‘magnetic spectrometer’ implies, AMS features a large magnet that seperates charged particles according to their electrical charge. Other instruments measure the velocity and energy of each particle (for all AMS instruments look here). Now the composition of charged cosmic rays is rather simple: about 99 percent are either hydrogen or helium nuclei, called protons and alpha particles, while protons by far outnumber alpha particles. It’s the remaining percent the researchers are interested in and where they look for positrons. If we assume for a moment that only baryonic matter exists, then all positrons in space would be the result of protons colliding with the interstellar medium. That’s why they are considered ‘secondary particles’ that lose their energy rather quickly and cannot travel very far, no further than about a thousand lightyears. So any excess positrons indicate that something unusual is happening, and whatever is happening, it’s not very far away. 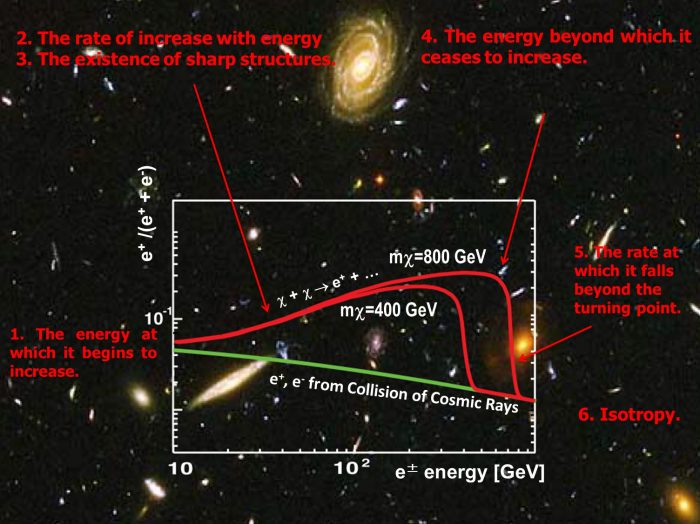 Characteristic features of the positron fraction in cosmic rays as seen by AMS-02. Item 5 on the right hand side needs further data for confirmation. Image: AMS Collaboration press release 2014

This graph from a 2014 AMS Collaboration press release shows the expected positrons and electrons from the collision of cosmic particles with the interstellar medium as a green line. But what the researchers found was an increase of positrons at the beginning of their measurement range of around 10 GeV, then a peak around 500 GeV (red lines) and a subsequent steep decline. These excess high-energy positrons are a regular feature in AMS results, and they need to be explained somehow.

One prevalent explanation is that when dark matter particles collide with each other, for instance neutralinos, positrons are released. There’s still some uncertainty concerning the shape of the drop after about 500 GeV: a sharp drop like in the graph above would mean that the AMS results coincide very nicely with dark matter theory. But if the curve levels off above the green line, then other cosmic events like nearby pulsars could be likely sources for the excess positrons as well. “The smoking gun signature in the positron to electron ratio is a rise and then a dramatic fall. That is the key signature for the dark matter annihilation in our galaxy’s halo,” Prof. Michael Turner from the Kavli Institute for Cosmological Physics at the University of Chicago said to the BBC. Turner is not part of the international AMS Collaboration.

As Samuel Ting explained in his Lindau lecture, the researchers are waiting for more data on the decline rate of high-energy positrons. Since the AMS is expected to function at least until 2024, Prof. Ting estimates that the question whether they’re really ‘seeing’ dark matter will be resolved within the next few years. 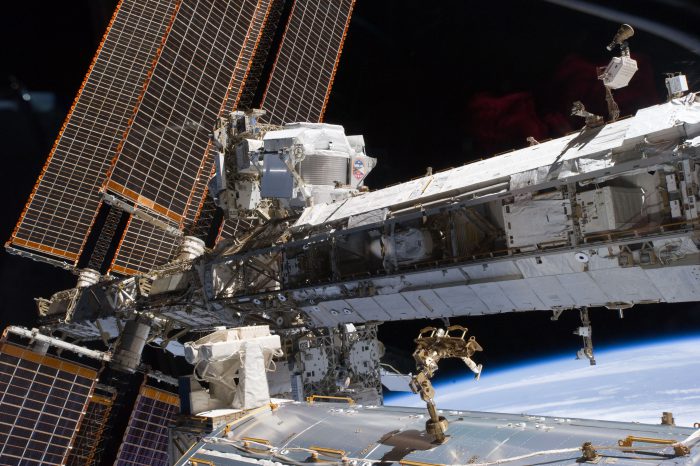 The starboard truss of the ISS with the newly-installed Alpha Magnetic Spectrometer-2, visible at the center left. May 20, 2011, STS-134 mission. Photo: NASA, public domain

The AMS-02 has been operational since 2011 and has detected several billions of cosmic ray events, including 300 million proton events. But the instrument had a rather bumpy start: after the prototype AMS-01 had safely travelled to space in 1998 aboard a Space Shuttle, Ting assembled an international collaboration of 500 scientists from 56 institutions in 16 countries. AMS-02 was scheduled to be launched in 2003, but in February 2003 the Space Shuttle Columbia broke up as it re-entered the earth’s atmosphere, and all subsequent flights were cancelled. The next launching date was in 2005, but in that year the Space Shuttle was grounded again due to continuing safety issues, and delays were piling up until it looked as if AMS-02 was never going to fly. But in 2008, the House of Representatives voted for the funding of one last Space Shuttle flight to carry the AMS to the ISS – overriding the White House stance. (As it turned out, there was another ‘last’ Space Shuttle flight in July 2011.)

The Space Shuttle Endeavour finally lifted off on May 16, 2011, installing AMS-02 on the ISS three days later. The spectrometer’s magnet had been changed quite late in the project when it became clear that the helium cooled magnet would work only for about 20 months. With the new magnet that is cooled by the ISS engergy supply, there are no technical time limits to its operation. 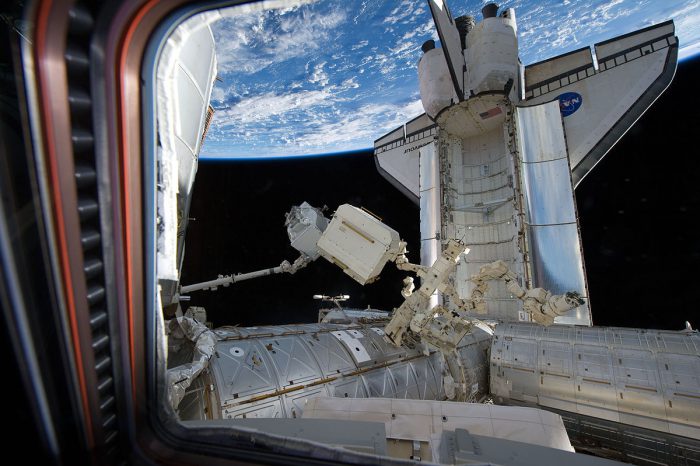 The Space Shuttle Endeavour is docked to the ISS during mission STS-134. The station’s Canadarm2 is just lifting the Alpha Magnetic Spectrometer-2 from the Shuttle’s payload bay for installation on the ISS starboard truss on May 19, 2011. Photo: NASA, public domain