“More than a century has flown by since Alois Alzheimer first described the deadly disease that would come to bear his name, but the last drug was approved 14 years ago,” according to the new book by Michael Wolfe of Brigham and Women’s Hospital in Boston. Don’t get me wrong: much knowledge has been accumulated on the molecular mechanisms of the disease in recent years. But numerous attempts to tranform this knowledge into effective therapies have failed: Alzheimer’s disease (AD) simply is no ‘single-cause, easy-cure’ disease.

AD is a neurodegenerative disease, meaning that the functioning of the brain deteriotes until the patients cannot take care of themselves anymore, suffer severe memory loss, and finally even basic physical functions break down because the brain cannot send the relevant signals anymore. Up to 70 percent of all dementia cases can be attributed to Alzheimer’s. The brains of Alzheimer patients show typical atrophied areas (see graph). Hence, Volumetric MRI and PiB PET of the brain are used for diagnostic purposes.

These brain graphs describe how the brains of Alzheimer’s patients (right) atrophy and shrink over time. Seen from the outside, the afflicted brain also looks ‘wrinkle-free’ or almost ‘smooth’, another AD characteristic. Image: Garrondo, from ADEAR original files, both public domain

1. Costs of dementia care
Alzheimer’s is among the most costly disease in developed countries. In 2015, an estimated number of 46 million people were suffering from dementia worldwide – and this number is expected to triple by 2050 due to increasing global life expectancy. Advancing age is the largest risk factor: every five years after reaching 65, the AD risk doubles. The total costs of care are listed as high as 800 billion US-Dollars globally per year, according to the World Alzheimer’s Report 2015, mostly for long-term care. In 2011, the costs in the US alone were estimated at over 200 billion Dollars, including non-market costs of care at home. If dementia care were a country, it would be the 17th or 18th largest economy in the world.

2. Alzheimer’s and Down Syndrome
The characteristic AD plaques are accumulations of abnormally folded amyloid beta protein. Thus, Alzheimer’s has also been classified as a protein misfolding disease like Creutzfeld-Jakob. The plaques start to form when the amyloid precursor protein APP is degraded. Responsible for degradation are two proteins, gamma secretase and beta secretase, yet several drugs targeting gamma secretase were not very effective. Since the gene for APP is located on chromosome 21, people with Down’s syndrome, who have three copies of this gene, also run a high risk of developing early-onset AD. 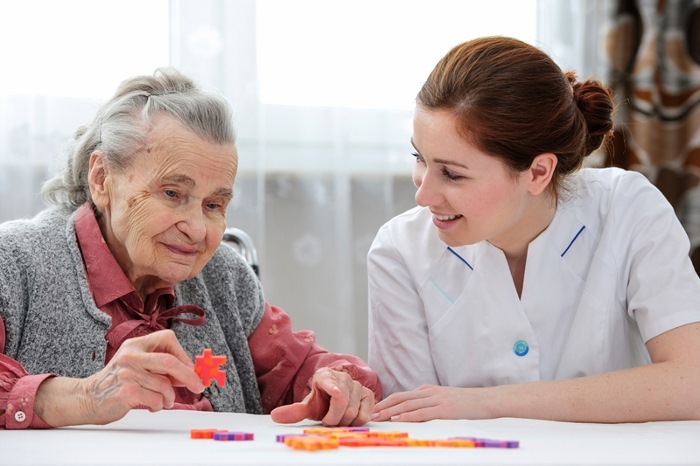 Providing adequate care for a dementia patient is time-consuming – and expensive, especially in a nursing-home setting. Two thirds of all nursing home residents have some sort of dementia. Photo: iStock.com/AlexRaths

3. Human-to-human transmission
A study from 2015 found that in some brains of Creutzfeld-Jakob patients who died young, many microscopic changes typical for AD were found. After comparing these findings with several control groups, like patients with other prion diseases, the researchers concluded that the original patients had probably been ‘infected’ with Alzheimer’s proteins alongside Creutzfeld-Jakob prions when they had received contaminated human growth hormone decades earlier. The researchers further suggest that there might be other human-to-human transmission routes for AD proteins.

4. Genetic risk factors
“Roughly half of the risk for Alzheimer’s disease is linked to things we can’t control, like age and genetics. But the other half are things that are at least partially in our control – you can reduce your risk with lifestyle modification,” explains Jeff Cummings, Director of Cleveland Clinic’s Lou Ruvo Center for Brain Health (more about prevention in paragraph 10 of this article). Several genes have been identified to contribute to the development of AD, but only one variant of apolipoprotein, called APOE-e4, has been discovered as a risk factor. Apart from this one variant, scientists have detected some rare genes that cause early-onset Alzheimer’s in only a few hundred extended families worldwide, accounting only for a small fraction of AD cases. So the hunt is on for more common AD risk genes.

5. Alzheimer’s as type III diabetes?
Obesity and diabetes are both significant risk factors for Alzheimer’s: being obese in mid-life doubles the AD risk. Insulin passes the blood-brain barrier and influences the brain’s energy supply, as well as memory storage and has a regulatory effect on how the brain gets rid of toxic amyloid. So for instance when a patient develops type II diabetes, not only the body cells but also the brain cells become increasingly insulin-resistant. Some researchers even call AD ‘type III diabetes’, although the term is ambiguous. In clinical trials, an insulin sensitizer was able to improve cognition in some AD patients. In a mouse model, insulin cleared soluble amyloid beta from the brain. Ongoing research suggests that intranasal insulin – that increases insulin levels in the brain – might also be a therapeutic strategy against AD. 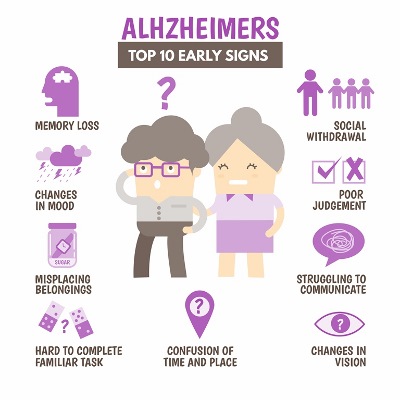 Medical Alzheimer’s diagnoses are complicated and involve medical imaging as well as laboratory findings. But there are also simple, everyday diagnostic criteria everybody can check, as described in this graph. Image: i.Stock.com/Falara

6. Immunotherapies
The vaccine AN-1792 had looked very promising in a mouse model to active the patient’s immune system to attack amyloid beta. But a Phase II clinical trial had to be stopped in 2002, because 18 of 200 patients had developed serious brain inflammations. Interestingly, a later study of some participants’ brains showed that the vaccination had indeed cleared their brains of amyloid plaques – but had not halted neurodegeneration. So, getting rid of the plaques doesn’t seem sufficient to stop the disease. An antibody treatment by drug giant Pfizer failed in 2012. But there is a new, promising antibody treatment developed at the University of Zurich, Switzerland: After one year of treatment with Aducanumab, cognitive decline could be significantly slowed, compared to a placebo group, and the patients’ brains were almost completely cleared of amyloid plaques.

7. Current medications target different pathway
Five AD drugs approved in the US target a different process in the brains of AD patients: not amyloid plaques, not the tau protein tangles, but the activitiy of the cholinergic neurons that is reduced in AD patients. These neurons use the neurotransmitter acetylcholine, so ‘acetylcholinesterase inhibitors’ are used to slow down this neurotransmitter’s degradation. One of these drugs is combined with an ‘NMDA receptor antagonist’ that prevents an over-stimulation of the brain with glutamate, another AD characteristic. But already in 2008, it was concluded that this combination “can result in statistically significant but clinically marginal improvement in measures of cognition and global assessment of dementia“.

8. Involvement of Herpes infection?
Studies from Manchester show a striking link between Herpes simplex type 1 viral DNA and plaques in the brain: whereas most brain plaques showed virus DNA, in healthy as well as in AD afflicted individuals, only 24 percent of the viral DNA in the brain was connected to plaques in healthy individuals, whereas in AD patients, 72 percent of the virus DNA found was plaque-associated. The subsequent use of antivirals in cell cultures produced promising results. So AD might one day be treated with antivirals, among other strategies. 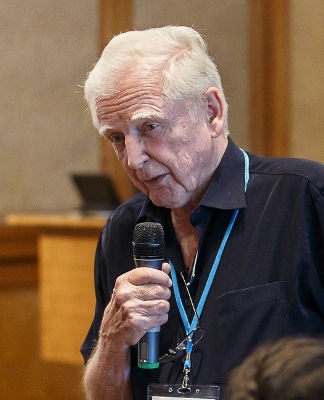 Harald zur Hausen was awarded the 2008 Nobel Prize in Medicine for finding the connection between HPV-viruses and cervical carcinomas. In his most recent work, he’s looking for possible links between Bovine viruses and neurodegenerative diseases. This picture was taken at the 65th Lindau Nobel Laureate Meeting in 2015. Photo: Rolf Schultes/Lindau Nobel Laureate Meetings

9. Harald zur Hausen: possible role of bovine viruses
The findings from Manchester coincide nicely with Nobel Laureate Harald zur Hausen’s latest research: He assumes that neurodegenerative diseases develop as a combination of an early infection with bovine viruses (through milk and meat consumption) with a Herpes infection. If the same brain cell is infected with both viruses and a vitamin D deficiency reactivates the Herpes virus, the infected cell starts to ‘produce’ the bovine virus DNA fragments in large numbers, evoking an immune response, thus leading to chronic inflammation; zur Hausen and his team study multiple sclerosis, and one MS characteristic is chronic inflammation. Zur Hausen suspects that similar infectious processes might happen in other neurodegenerative diseases like Parkinson’s and AD as well. In case of MS, he suggests vaccinating cattle against the most common viruses, thus eliminating the early infection of humans.
And what about AD as a chronic inflammation? Already twenty years ago, it was found that patients with rheumatism who take strong anti-inflammatory drugs have a significantly lower AD risk.

10. Preventing Alzheimer’s
As Jeff Cummings from Cleveland said, prevention is possible to some extent. Admittedly, many suggestions sound like something every GP says about 200 times each day: eating less animal fat, processed food or sugar, more exercise, weight reduction, treating high blood-pressure and insuling resistance, etc. But in case of Alzheimer’s, there are a couple more: playing certain computer games, meeting other people, playing board or card games – any social or brain-jogging activity will do. Interestingly, learning another language can delay the onset of Alzheimer’s, and bilingual individuals are usually diagnosed later in life than monolinguals. All of these activities seem to boost the ‘cognitive reserve’ of the brain, that works like a ‘cushion’ against the effects of early dementia – and a recent study showed that prevention really works.

And there are many other hypotheses, for instance a cancer drug that reduced amyloid plaques and improved cognitive performance in mice. Or the 2015 finding that many brains from AD patients contain fungal materials – is Alzheimer’s, among other things, ultimately a fungal infection? Currently, about 90 drugs are being tested against AD in clinical trials in the US alone, and as of 2014, there were 315 open clinical trials under way. Regrettably, it was merely not possible to include all innovative and promising therapeutic strategies into this article – but we’re looking forward to hearing about their results! Finally, things seem to be moving forward in AD research.