Alexander Gerst: Coming Home Today!
Back
If everything goes according to plan, today Alex Gerst will land with a Soyuz capsule in Kazakhstan after having spent 166 days in space. On board the International Space Station ISS, the German geophysicist has lived in a quite diverse flat-sharing community. With some of his flatmates he had trained for months: ‘I know all their little peculiarities and I know how I react to them. We are friends,’ the 38-year old says. For his PhD thesis, Gerst spent many weeks in Antarctica, studying the active volcano Mount Erebus – so he knows about extreme situations and how they make people stick together. 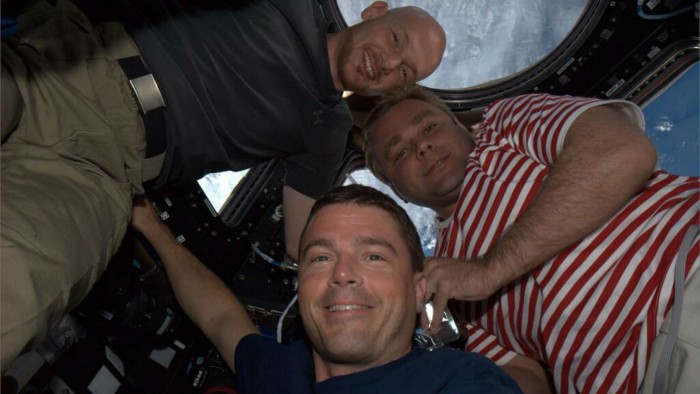 Reid Wiseman, Maksim Surayev and Alexander Gerst have trained together for many months. Photo: ESA/NASA

Gerst has named his mission ‘Blue Dot’ to emphasise how vulnerable our small planet looks from space. In a live TV broadcast, he described our home planet: ‘We live on this small blue boulder flying through the endless black universe. We humans have nothing but this small boulder. When we use up its resources, we’re done in.’ 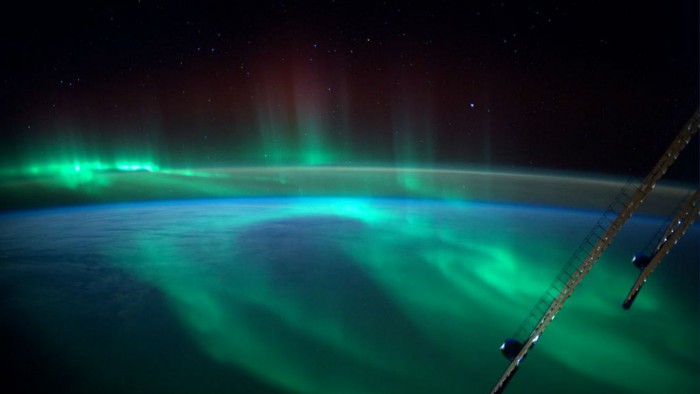 The space station flying over polar lights. ‘I never thought I would be flying through an aurora,’ Gerst said. Photo: ESA/NASA

Gerst’s love of space started with his grandfather, who allowed little Alex to speak a few sentences into his radio equipment: its antenna was directed at the moon, where the message was reflected and distorted. ‘That was really fascinating, that a small part of me had just been on the moon,’ Gerst remembers. To become an astronaut for the European Space Agency ESA, Gerst had to beat more than 8,400 competitors. His training took more than three years, including land and sea survival training, the former in Siberia with outdoor temperatures down to minus 30 degrees centigrade, and an intensive course in Russian: for some time, he had forty hour weeks of Russian lessons, to be able to operate the Soyuz capsule and to communicate with Russian ground control. ‘That was really hard,’ he recalls. 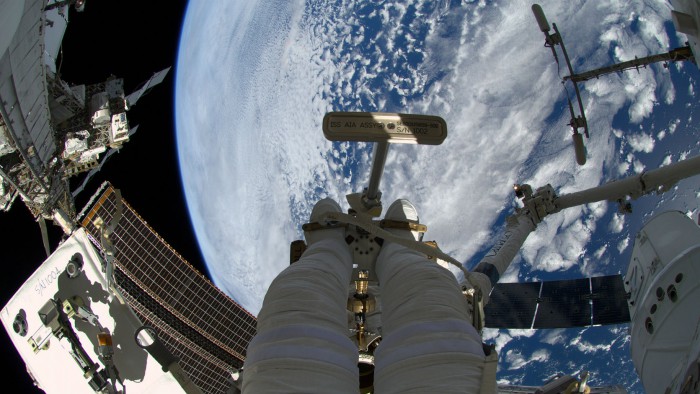 Look at this: it was worth it! Gerst being strapped to a robot arm during his EVA on October 7th. Photo: ESA/NASA

No German astronaut has tweeted as much as Gerst: almost every day, there are new pictures, videos or messages from his space adventure. Take a look at a live feed of his Twitter handle @Astro_Alex: [dpSocialTimeline id=7] Videos of his mission could also be seen on his Facebook account, on Youtube and in numerous live TV broadcasts. For the opening session of the 64th Lindau Nobel Laureate Meeting this summer, he also sent a video message – he had been a guest of honour at the 63rd Meeting in 2013. Video is definitely the key medium of his space journey! For the readers of Spiegel-Online, a leading German news website, Gerst answered some of their questions via video. For instance, he talks about his biggest surprise in space: after the launch in Baikonur on May 28th, as the Soyuz spaceship was approaching the ISS, the astronauts switched their radio receiver on – and suddenly heard all the weather reports from the airports below them! 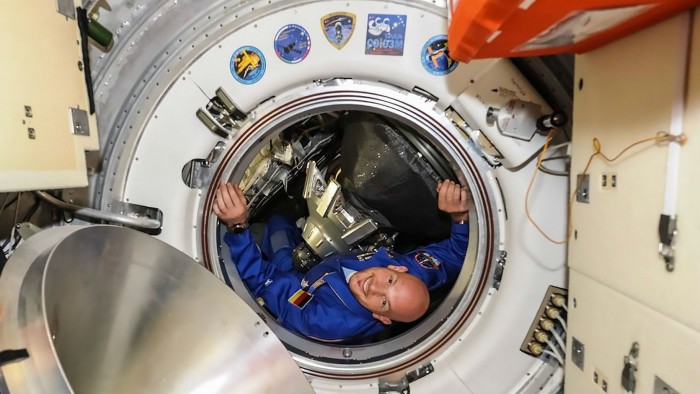 On May 29th, Gerst and his colleagues arrived at the ISS – the destination of their dreams. Photo: ESA/NASA

When he first arrived at the space station, he noticed a peculiar, technical smell reminding him of electronics. But after a few minutes, he could not smell the ISS anymore. He was also surprised that space seems to have a very distinct smell: like walnuts, only ‘more technical’. Whenever space suits are back indoors after EVAs (Extra Vehicular Activities), Gerst and his colleagues were able to smell outer space. He assumes that this smell is caused by oxidation processes on the ISS surface due to oxygen atoms in the upper atmosphere. 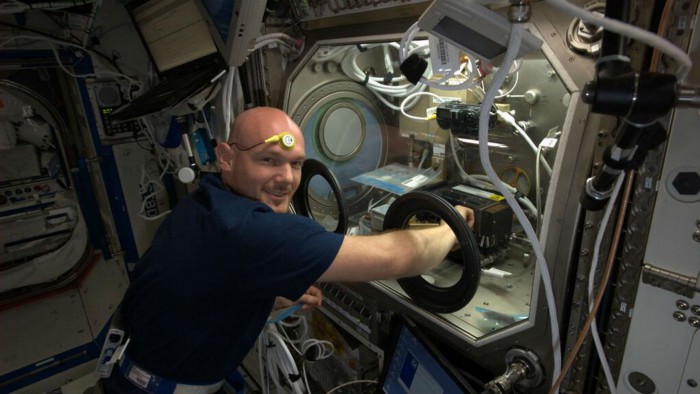 Gerst conducting an experiment, with a temperature sensor on his forehead. Photo: ESA/NASA

During Gerst’s time aboard the station, he and his fellow astronauts conducted 160 experiments in the only laboratory operating in complete weightlessness. The research topics ranged from medical experiments, where the astronauts tend to be the ‘guinea pigs’, to material research and combustion processes. 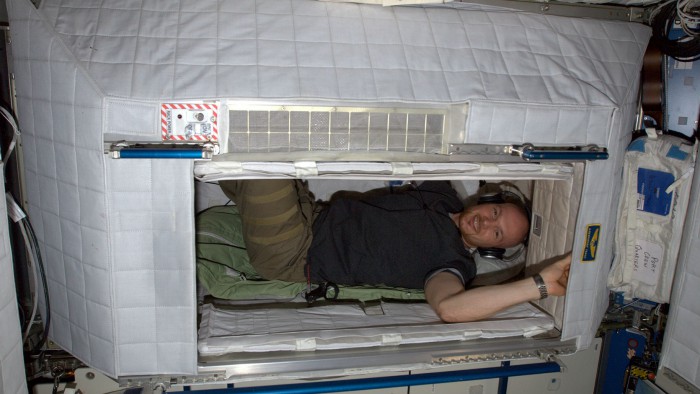 Gerst in his bunk. It’s easier to be comfortable on Earth than in space. Nevertheless all astronauts are convinced they have the best job in the world. Photo: ESA/NASA

When they packed for their space journey, every astronaut was allowed only about three pounds of personal luggage. (Astronauts don’t pack many clothes: there is not enough clean water aboard the station to wash them, so clothes are worn a long time and then thrown out.) Gerst mostly packed pictures of his family and loved ones. ‘My family has supported me from the start – whether I went to Antarctica or to space. Actually I think they would have liked to come along each time!’ After landing in Kazakhstan, Gerst will fly directly to Cologne, Germany, to start his rehab programme. Back home, he will not only see his loved ones again, but will also be able to order himself a pizza – something he has really missed in space. 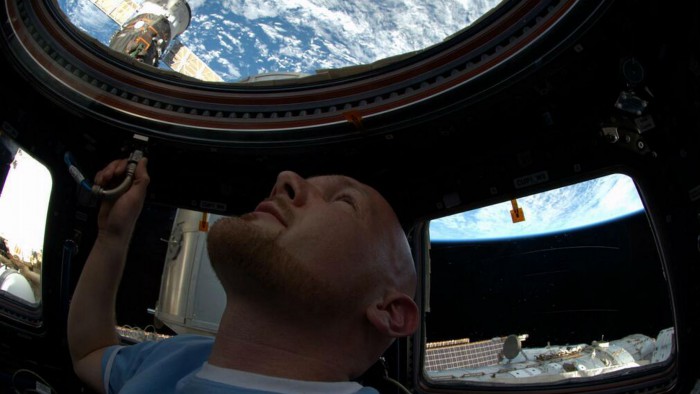 Alexander Gerst’s dream has come true. Many years ago, he made a bet that he would be an astronaut some day. On board the ISS, he made no secret of his dream to travel even further – to the Moon or even to Mars. Has he already made a bet about these distant destinations? Once he’s back in his home town of Künzelsau in Southern Germany, reporters or his friends might ask him.