A Sunburnt Country
Back
Yesterday, Australia had the privilege of hosting the International Get-Together. This was a unique opportunity to showcase Australian culture, lifestyle, and of course, science. As an Australian living abroad this was also a chance for me to remember all the things from my home country that I miss. The MC of the night (and in one of my opinion one of its stars) was Adam Spencer. In his broad Australian accent he conveyed not only his passion for science but he is also managed to make everyone laugh and feel quickly at ease. Most importantly, he was able to prevent any buffet associated disasters/riots : ) We were welcomed to the evening by Countess Bettina Bernadotte and the Honourable Andrew Robb, who helped highlight the important of science in Australia and the important role that it will play in our future. It was then time for the Australian culture performance. The cultural performance had big shoes to fill, with most of the Lindau participants having been treated to the Ensemble of the Vienna Philharmonic Orchestra only one night prior. However, Genevieve Lacey and Marshall McGuire proved more than equal to the task. With the unique combination of the recorder (an instrument in Australia most renowned as a tool for children to annoy their parents) and the harp, they took us on an incredible musical journey. For me, their music invoked all the things that I love about Australia. The subtle sounds of the beaches and billabongs, the summer storm rolling over the hills after a long, dry heat wave and all the beautiful bird calls that you just cannot find in the forests of the Northern Hemisphere. This was one of the best musical performances I have seen in my life. Afterwards we were treated to a talk by Prof. Emma Johnston. I have to confess that whilst I have often seen her on TV, I have never seen her speak in real-life. This is something not to be missed. Not only did she showcase Australia’s beautiful marine environment and impart important pearls of wisdom regarding a career in research, but she even got me re-thinking my own chosen research topic….maybe, as Johnston suggested, we are all just frustrated marine biologists at heart. 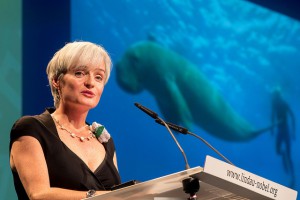 After a fulfilling buffet dinner (or in Australian English – ‘bloody good tucker’) we were all drawn up to the dance floor to participate in a traditional German dance. This involved each woman pairing with a man who would give her a flower and then walk around the hall with her. The walk culminated in a dance in the centre of the hall. For the first time, due to the excess of female scientists, there had to be some all female couples…..a very encouraging sight to see!

I could think of no better way to meet new people, and there is no better way to break the ice with someone then trying to figure out how to do a sort of waltz without stepping on any toes or knocking anyone out. In true Australian fashion the evening ended with a visit to the pub to drink a beer and watch some sport. A fitting end to a beautiful night. Thanks to everyone who helped organise this unique event and I hope that all the participants enjoyed it as much as I did.

Kirsty Short, Lindau Alumna 2014, is a post-doctoral researcher from Australia who is currently working at Erasmus MC, the Netherlands. Her research focuses on influenza virus, and specifically trying to identify the mechanisms by which the virus damages the lung during infection.