The Neutrino Catchers: Takaaki Kajita...
Back

Kajita and McDonald are both directors at large-scale research facilities with a futuristic appearance. These detectors are undoubtedly ‘cathedrals of science’: overwhelming and somewhat surreal. How fitting that they can thereby be used to catch something which is at least as difficult to comprehend: neutrinos.

“Neutrinos are unusual, ghost-like particles. Every second, more than 60 billion of them pass through every square centimetre of our body (and through everything else); most of them originate from the Sun.” Quote by Takaaki Kajita 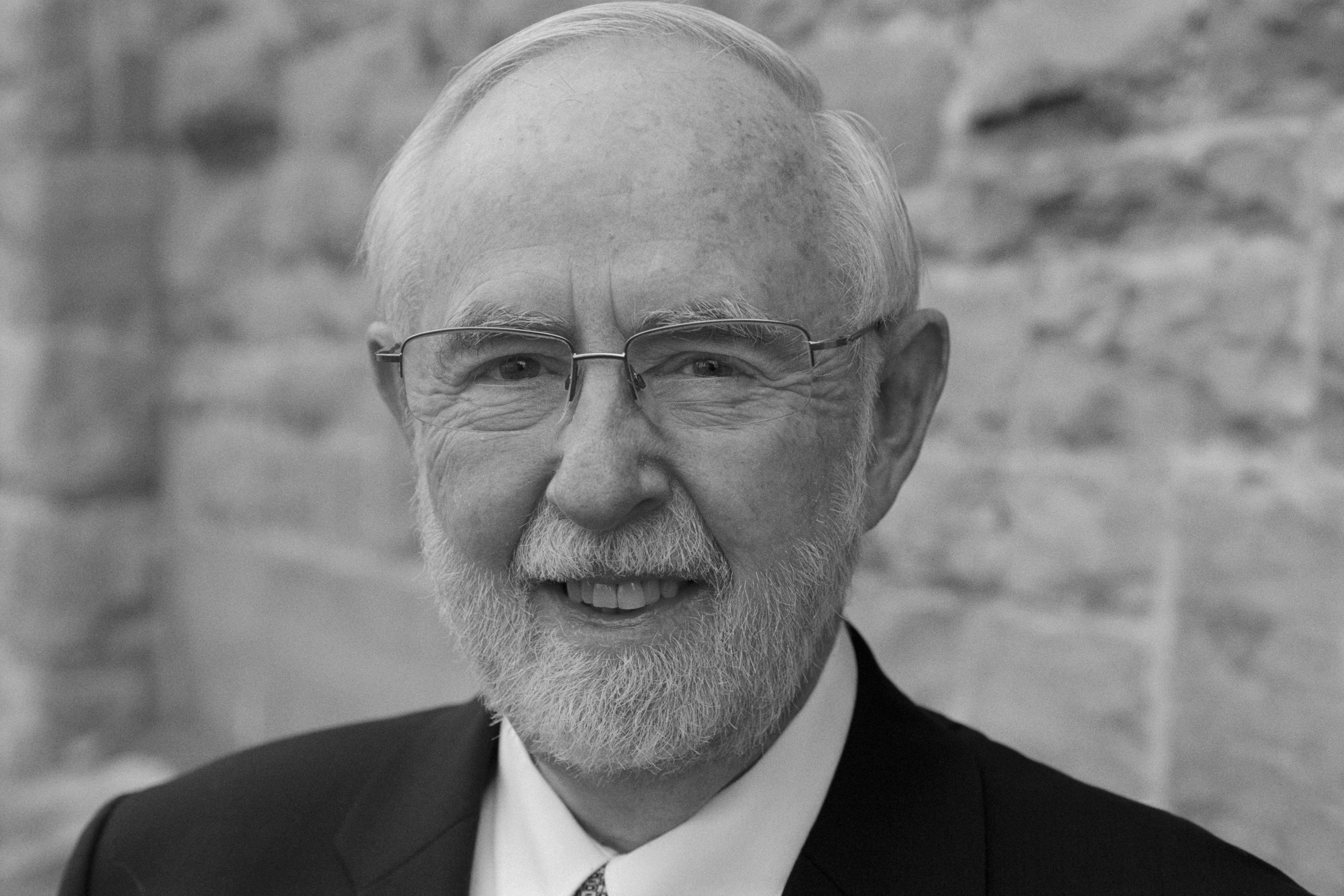 How must it feel to have such a gigantic technical plaything at your disposal? Adam Smith, Chief Scientific Officer of Nobel Media, asks Arthur McDonald in a telephone interview whether it isn’t great fun and receives a rather sober response: Yes, it is, if you have been successful! McDonald knows what he’s talking about: ‘his’ facility, the Sudbury Neutrino Observatory in Ontario, Canada, is as big as a ten-storey building and is located in a mine two kilometres underground. What do McDonald and his team see there?

“(…) you have the ability to observe particles that come directly from the core of the Sun. They’re telling you what’s happing there right now in terms of the nuclear reactions that are powering it, you are able to make measurements of the fundamental properties of the neutrinos themselves (…).” Quote from Arthur B. McDonald 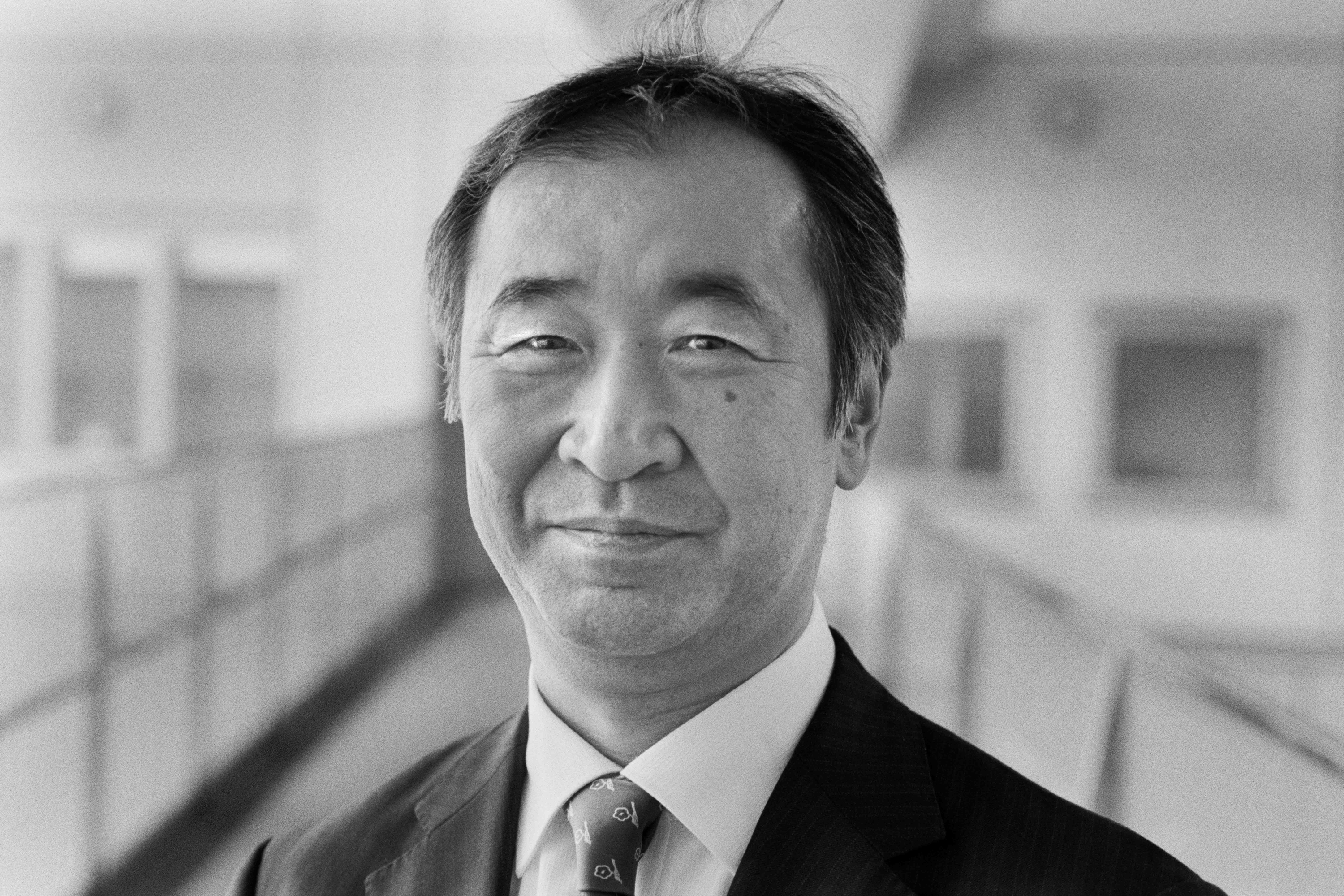 His colleague Takaaki Kajita does his research at the Super-Kamiokande not far from Kamioka in Japan. His answer to the question about whether working with his impressive research tool is fun is a definite yes and he adds that, keen researcher that he is, his place of work always fills him with enthusiasm. Kajita originally worked on proton decay and hit upon his present research field as a result of strange measurement results. At that time, Kajita and his co-authors wrote that, although they had not yet succeeded in observing any decayed protons, they had found a real treasure trove as they were analysing the data: convincing indications for the unexpected ability of neutrinos to change from one species of particle into another in flight. This so-called neutrino oscillation proved to be true and in conjunction with the proof of the neutrinos masses netted the Nobel Prize for the two researchers Kajita and McDonald.

Kajita was born in 1959 in Higashimatsuyama, studied at the University of Saitama and gained his doctorate in 1986 at the University of Tokyo. Since 1988, he has been working at the Institute for Cosmic Ray Research (ICCR) of the University of Tokyo, and this year also marks the discovery of the “atmospheric neutrino anomaly” by the Kamiokande team. Kajita himself explains that, as is so often the case in particle physics, the route to new findings involved the construction of a larger machine: the so-called Super-Kamiokande. 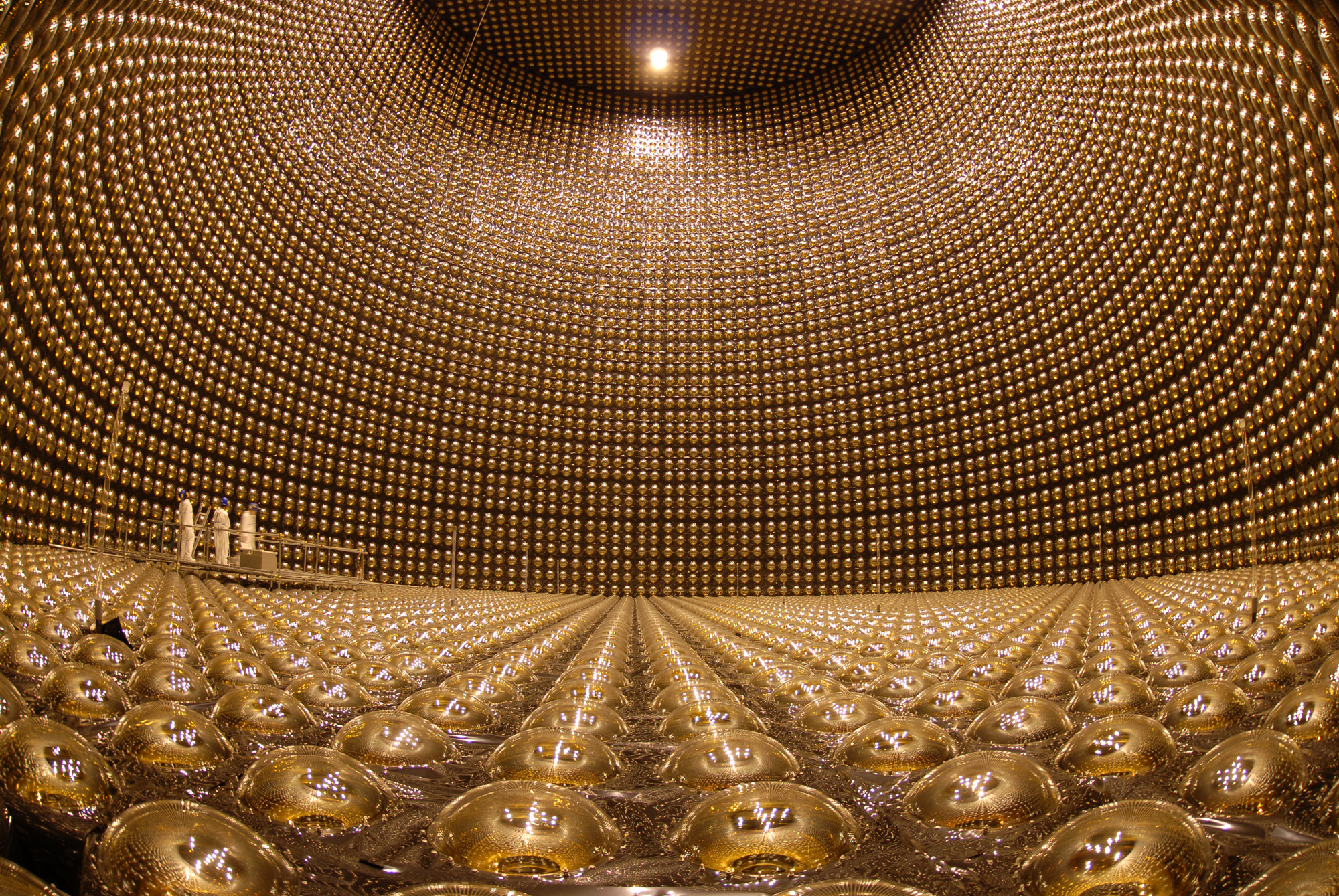 Inside the Super-Kamiokande, Copyright: Kamioka Observatory, ICRR (Institute for Cosmic Ray Research), The University of Tokyo

To summarize briefly what happens inside the Super-Kamiokande: light-sensitive detectors observe a tank filled with 50,000 tonnes of water in which flashes of blue light reveal the entry of muon neutrinos. This radiation can be understood as the optical analogy to the sonic boom – like a plane which generates an acoustic shock wave at supersonic speeds, high-energy charged particles emit so-called Cherenkov radiation, named for their discoverer, while travelling at speeds above the speed of light. In the case of the muon neutrinos, they interact with the electrons or nuclei of the water which can produce charged particles, causing the Cherenkov radiation. The light spreads out in the form of a cone and the size, form and intensity of the ring of light reveal the properties of the charged muons and electrons. It was found that the number of muon neutrinos did indeed differ depending on the distance they had travelled – this was the crucial indication that they must have changed.

Kajita’s luck was probably that he had been a part of it from the very beginning. One unusual facet of his career is that he has spent his whole research career in Japan. Ten years later, in 1998, the researchers were able to announce that they had discovered neutrino oscillation. In 1999, Kajita was appointed to a professorship at the University of Tokyo and became Director of the Center for Cosmic Neutrinos at the ICRR. Today, he is the Director of the entire Institute. This year, he and McDonald received the most valuable science prize of all, the Breakthrough Prize in Fundamental Physics.

Arthur Bruce McDonald’s career has followed a similarly straight course, even though he left Canada, where he was born in 1943 in Sydney, Nova Scotia, after his studies at Dalhousie University and gained his doctorate at California Institute of Technology in Pasadena. He worked for more than 10 years as a scientist at the Chalk River Laboratories, Ottawa, before going to Princeton University in New Jersey for seven years as a professor. In Princeton, McDonald was senior scientist at its cyclotron (a cyclotron is a special particle accelerator, a circular accelerator to be precise, which serves to set off nuclear reactions in physical research). In 1989, McDonald became the Director of Sudbury Neutrino Observatory (SNO) and at the same time professor at Queen’s University in Kingston, Ontario. At the very beginning of his time at the SNO, his research group discovered that the neutrinos originating from the Sun actually oscillate into muon neutrinos or tau neutrinos. 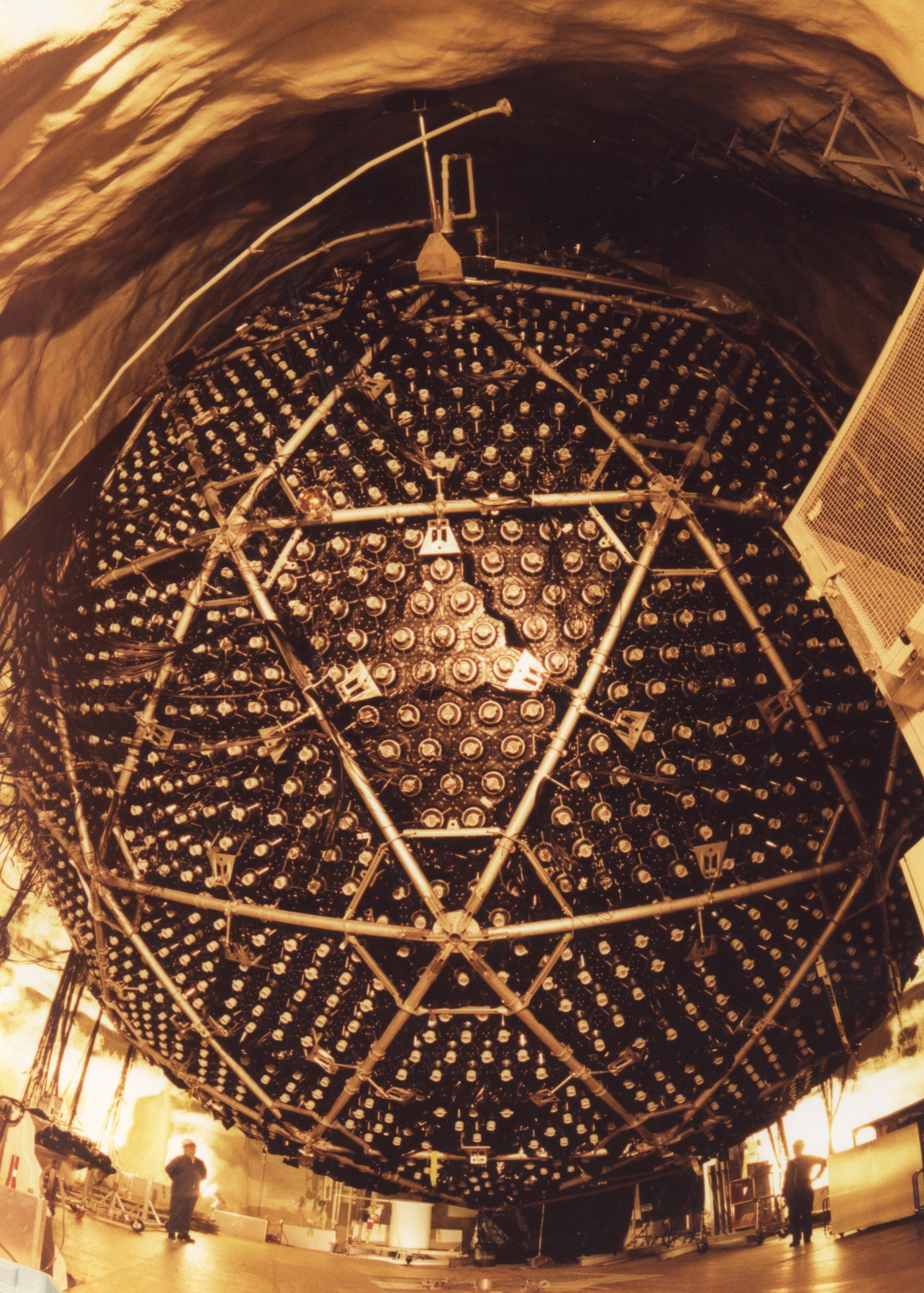 The advantage of the research facility in Canada is that not only Cherenkov radiation but also one other type of event can be observed here. The detectors at the SNO record the interactions between the solar neutrinos and the 1,000 tonnes of heavy water which the unit contains. ‘Heavy water’ is the name given to water in which some of the hydrogen has been replaced with deuterium, which has one more neutron than hydrogen, thus creating additional collision potential. The signals that originate here make it possible to detect all three neutrino species known to date.

Since 1989, Arthur McDonald has remained true to his university and has changed only his professorial chair. He has worked at several research institutions and universities as a visiting scientist and retired from his professorship in 2013. He kept up a frequent exchange of research news with Kajita – probably without ever suspecting that they would meet up again in Stockholm.

We are eagerly awaiting the lectures that the two Nobel Laureates will give in Lindau: Takaaki Kajita will give his lecture on “Atmospheric Neutrinos” on 27 June 2016, and Arthur McDonald will talk about “The Sudbury Neutrino Observatory: Observation of Flavor Change for Solar Neutrinos” on the same day.