Austria’s Ambitions in Science &...
Back

Over the last 20 years Austria has made enormous efforts to develop its reputation as a research nation. These efforts would appear to have been spurred on by the Lisbon process, which was launched in the year 2000 and aimed to develop a European Research Area. Among the goals defined for this European Research Area was that the individual participating states would reach a target of three percent of GDP in their spending on research by 2010.

Austria not only made great strides in increasing its research spending, it followed this up with structural reform. In addition to the country’s 22 public universities, there is the Austrian Institute of Technology (AIT), which is the biggest non-university research group, and the Austrian Academy of Sciences, the biggest institution for basic research. The main concern of those responsible for the process of developing Austria as a research nation was to transform the brain-drain into a brain-gain by adopting two particular approaches: the “brainpower austria” initiative intended to point Austrian researchers working abroad in the direction of career opportunities at home and support them in making the move home; the “fForte” (Women in Research and Technology) initiative was established because, at the time, women only accounted for one-fifth of Austria’s researchers. Corresponding programmes were immediately established by three ministries. 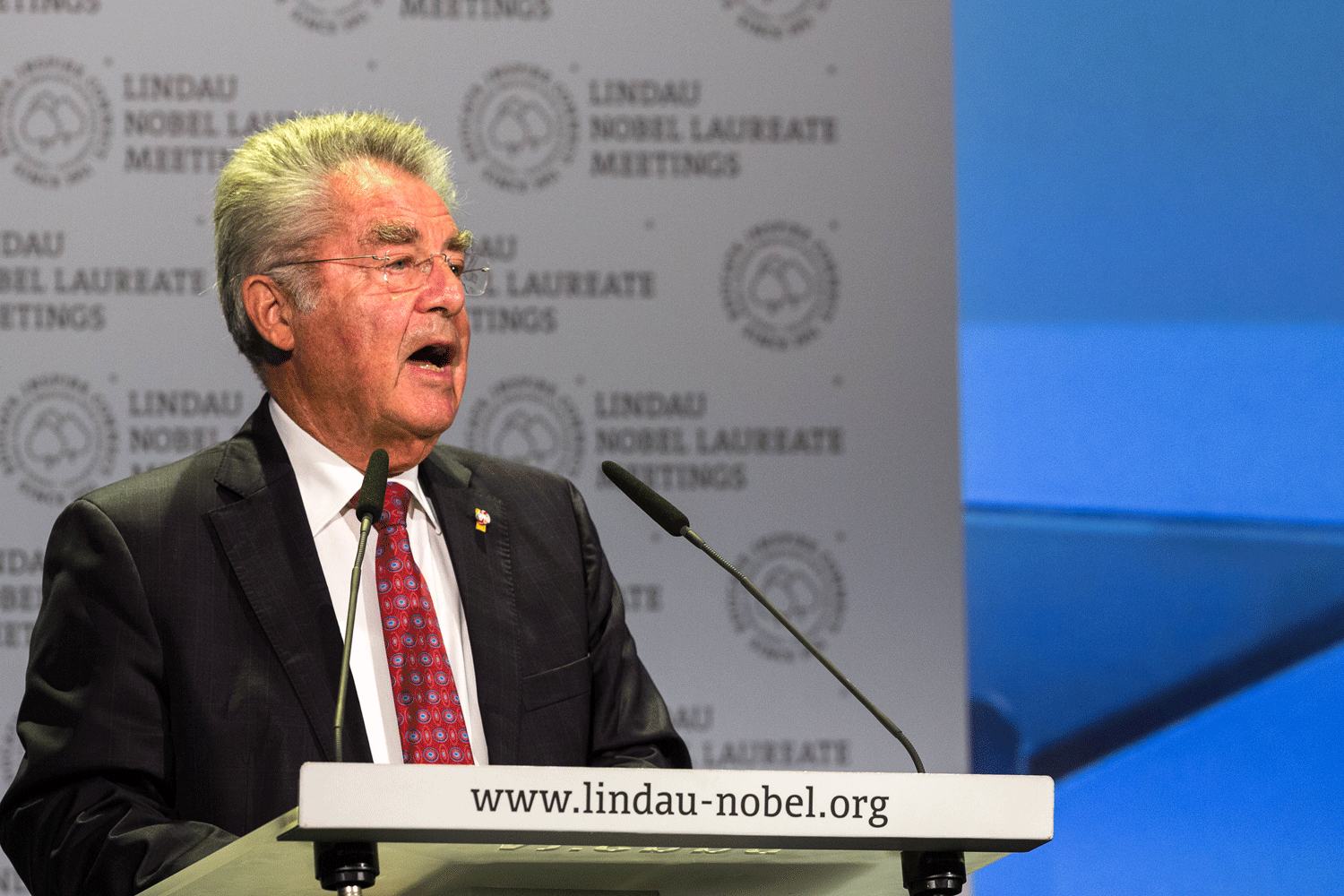 A female researcher from Austria who has attracted a lot of attention in recent years is a typical embodiment of the success of these efforts: Francesca Ferlaino, an experimental physicist based at the University of Innsbruck. Ferlaino was born in Naples, studied physics in Naples, Trieste and Florence, and joined Rudolf Grimm’s research group in Innsbruck in 2006. She was employed as a research associate there from 2009 and remained at the university despite the fact that a German university tried to recruit her with the promise of a Humboldt Research Fellowship. Instead, she was appointed Professor of Experimental Quantum Physics in Innsbruck in 2014 and is also Research Director of the Institute for Quantum Optics and Quantum Information of the Austrian Academy of Sciences.

The Austrian research group to which Ferlaino originally belonged was the first in the world to succeed in achieving a Bose-Einstein condensation of erbium atoms. Ferlaino later generated the first degenerate Fermi gas of the same species and has since received various research grants and prestigious awards. When asked in an interview whether staying in Austria was the right thing for her to do, she replied that she likes being able to combine research and teaching, she values the institute for quantum physics in Innsbruck as an internationally renowned flagship research centre, and welcomes the fact that physics in general is held in high esteem by the Austrian public. Despite this, Ferlaino warns that it is important for Austria not to rest on its laurels: “If you want to maintain the high standard of research in Austria in the great tradition of quantum physics, you have to invest. For this reason, we have been pleading for a ‘house of physics’ in Innsbruck for a long time, as we have run out of space for more laboratories. I am delighted that Minister Mitterlehner has announced that the construction of the new building will start in 2018.” Reinhold Mitterlehner took over the science and research portfolio, in addition to his existing responsibilities as Federal Minister of the Economy, in 2013.

Austrian Federal President Heinz Fischer’s welcome address at the opening ceremony of the 66th Lindau Nobel Laureate Meeting was eagerly awaited. Fischer will remain in office until 8 July this year and his speech in the Lindau Stadttheater marks one of his last official duties. How wonderful it was for Lindau that he was Austria’s minister of science in the 1980s and that his affinity for science is palpable. He opened his address with praise for ‘his’ young Austrian researchers, a new and internationally successful generation of scientists. He also noted that Austria has succeeded in making the targeted three percent of GDP available for spending on research. 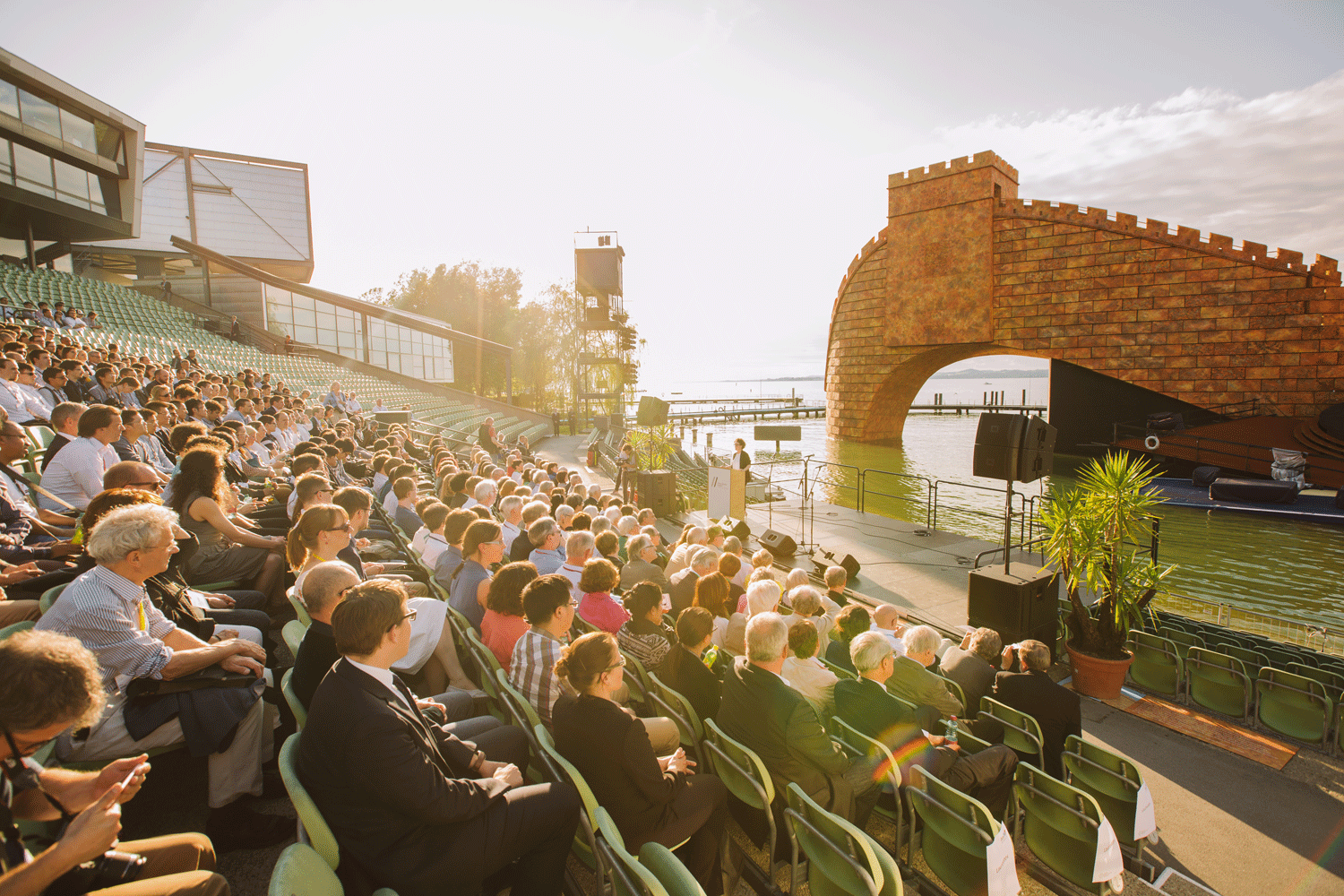 The Austrian International Get-Together event framed by the “Seebühne” (lakeside stage) in the Austrian city of Bregenz which is very close to Lindau in Germany. Foto: J. Nimke/Lindau Nobel Laureate Meetings.

Barbara Weitgruber also emphasized this investment in the future of science. Representing Minister Mitterlehner, she opened the discussion on quantum physics at the science breakfast on Monday morning. At the international get-together in the evening, Ms Weitgruber also stressed Austria’s leading role in scientific networking in Central and South Eastern Europe. She spoke against the magnificent backdrop of the floating stage on Lake Constance in Bregenz, to which young scientists, Nobel Laureates and guests had travelled on a beautiful but all too brief boat trip at the invitation of the Austrian Federal Ministry of Science Research and Economy.

Something that Austrian Federal President Heinz Fisher had put to us at the end of his welcome address the previous afternoon was still echoing in our ears at that point, however. Reconciling the Jewish Nobel Laureates, who were forced to flee Austria following the Anschluss with National Socialist Germany, with their former homeland, is clearly a matter of great importance for him. Three great names and personalities are involved here: Walter Kohn, Nobel Laureate in Chemistry in 1998, who unfortunately passed away this year; Eric Kandel, Nobel Laureate in Medicine in 2000, with whom Fischer maintains friendly contact; and Martin Karplus, Nobel Laureate in Chemistry in 2013, who became an honorary citizen of the city of Vienna last year.

In the past, criticism was expressed in Austria at the idea that Jews who had been driven out of the country in 1939 should suddenly be Austrian again – meaning ‘one of us’ – when they were awarded a Nobel Prize; but Fischer personally believes in adopting a dignified and irreproachable stance in the face of such hypocrisy. In the 1960s, he uncovered a scandal concerning an anti-Semitic professor and he also traced the history of Jewish culture and science in his speech in Lindau. Fischer succeeded in establishing the link from Nobel Peace Laureate Bertha von Suttner, a pioneer who helped to inspire the establishment of the Nobel Prize, and Elias Canetti, Nobel Literature Laureate and author of “Crowds and Power”, to the present, a time in which it is once again important to warn against totalitarian aspirations. Fischer responds symbolically to this with a call for the “will to adopt an upright gait” and his vision of peace, trust and cooperation – a vision that could not be a better reflection of the spirit that led to the emergence of the Lindau Nobel Laureate Meetings, and continues to inspire them.