Roy Glauber and his time...
Back

He was destined to become one of the last contemporary witnesses of the Manhattan Project: Roy J. Glauber, the 2005 Nobel Laureate in Physics, went to Los Alamos when he was just 18 years old. For this reason, he gave a lecture entitled “Some Recollections of the Manhattan Project 1943-1945” at this year’s Lindau Nobel Laureate Meeting. In his lecture he provided some insights into the history of research but he mainly presented his recollections of events and personalities that remain vivid to the present day. A small group of press representatives were allowed to speak with him in advance of the talk. 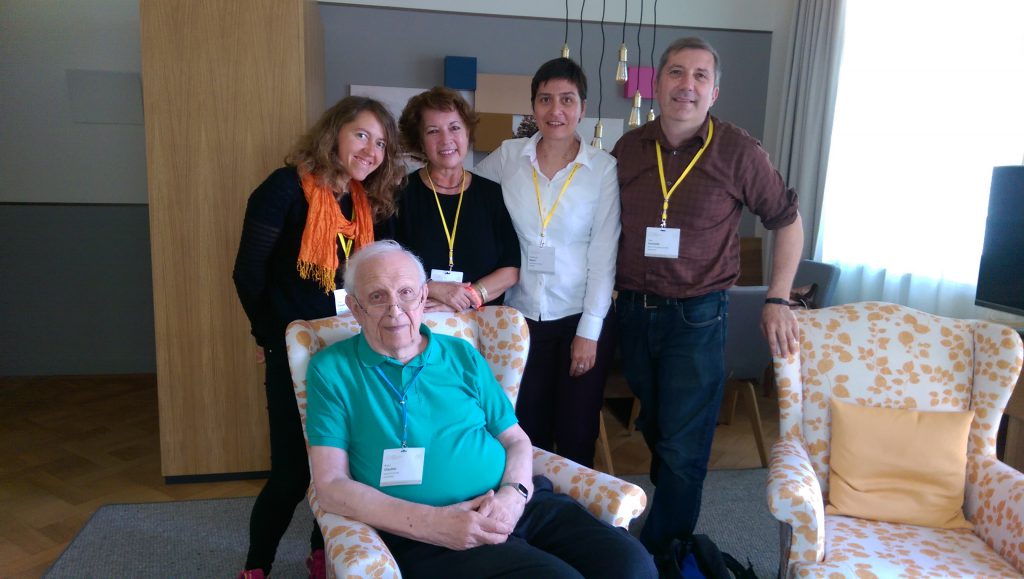 How did it come about that an 18-year-old was targeted by the project’s recruiters? Glauber reports that, at the time, during the war, there was a general attempt to reduce the time spent in education and training. He himself skipped classes and courses, which was not unusual, but also availed of every additional educational opportunity at an early stage, for example the support offered to him by a high school teacher who inspired him to focus his attention on mathematics and sent him off on holidays with the books he needed to do it. Glauber smiles as he reports that it would never have occurred to him to do this otherwise and he had no idea that it would become so important for him one day. By the time he was “lured” away from Harvard, he had attended more or less all of the courses necessary to obtain a doctorate. He was asked to complete a questionnaire at the time and, based on this, was then visited by an “unknown man in a black suit”: the idea was to find suitable jobs for well-educated young men.

In Roy Glauber’s case, the outcome was a train ticket to Chicago and a post office address for his personal possessions. Glauber did not know exactly where he was going and what he would have to do. Even today, it is obvious from his description of the train journey and his arrival at the second destination – Lamy, New Mexico – what an adventure this was for him. Fascinated by the countryside and indigenous people he observed at the train station, he arrived at his destination. He completed the last leg of the journey by car in the company of two men, one of whom looked like a cowboy to Glauber. They were engaged in a coded discussion about a scientific problem. For Glauber as a young man it was a truly bizarre experience to hear mysterious men discuss remarkable things in this new environment, which he describes as “godforsaken country”. Later, it came to light that one of them was the renowned mathematician John von Neumann.

On his first day in Los Alamos, Glauber was given a list of persons who he was instructed to seek out. He spoke to the Robert Bacher, the Director of the Department of Experimental Physics, among others. Bacher asked him what work he thought was being carried out there. Because Glauber knew that work was being done on the chain reaction for nuclear fission and the topic had then disappeared from all of the newspapers, he expressed his suspicion that secret research was being carried out on this topic. He was informed that this had been successfully achieved one-and-a-half years earlier in Chicago and that they were now working there on the chain reaction for the construction of a bomb. Glauber explained in the interview how much that upset him at the time and how it occurred to him that this was no gift to humanity. He added that it took him weeks and months to get over it. He describes this moment similarly in his autobiographical notes on the occasion of the awarding of the Nobel Prize. The scientific challenges helped him to overcome this initial shock. However, something that everyone working on the project was thinking weighed much more heavily on his mind: the fact that the Germans had the same knowledge and were possibly also working on the bomb. According to Glauber, nobody was motivated by the conflict with Japan in supporting this project.

Over the next two years, Glauber was involved in the detailed calculation of critical mass and according to him he wrote three detailed secret essays on this topic. He explained in the interview that he was not authorised to be in the vicinity during the big test ignition of the bomb – after all, he was just a theorist – but a small group of people, including him, managed to get to Sandia Peak near Albuquerque. They only knew that the test would happen during the night but had no contact or possibility of finding out anything else about it. According to Glauber, at some point the others gave up hope that they would see anything. But he was a bit more stubborn and stayed awake until 5:30 a.m. Then, it was “as if the sun rose in the south”. This so-called Trinity Test was carried out in July 1945; the two atomic bombs were dropped on Japan in August. For the majority of the scientists and their families it simply meant an end to years of secrecy and the transition back to a civilian life “outside”. As Glauber writes in his biographical notes, they did not celebrate the bomb, but rather the end of the war. 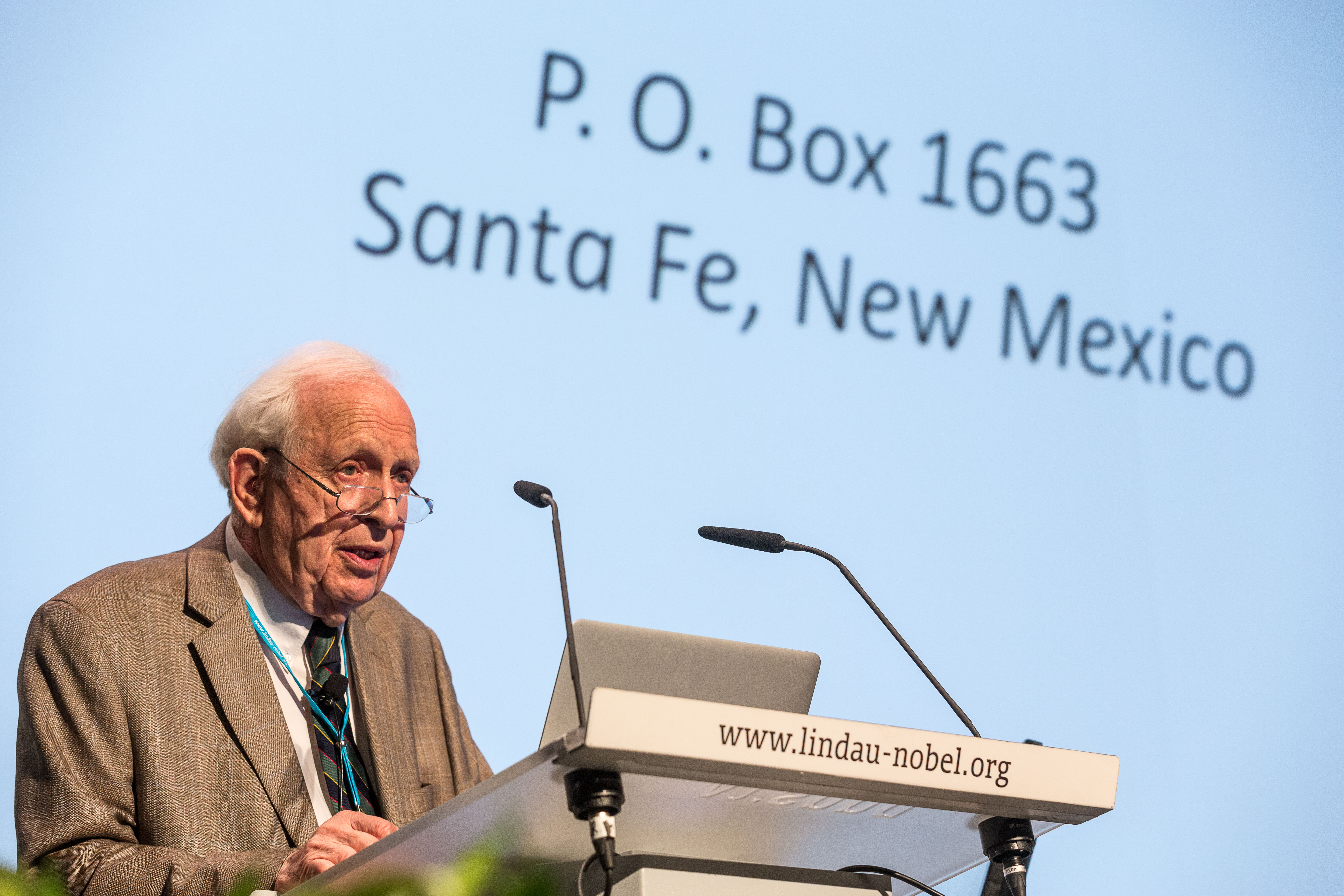 During the interview in Lindau we wanted to know whether Glauber regretted being part of the Manhattan Project. He told us that what he regretted most was the fact that they did not finish faster and that there were repeated delays. Otherwise they could have had an influence on the situation in Europe. In his opinion, the decision about the bombs would have been different if they had been ready earlier. When asked whether he believes that atomic weapons should be reduced and ideally abolished, he answered: “Absolute zero is the only thing, I think that makes any sense.”

He believes that complete disarmament will not be possible, as the question always remains as to who has the last atomic weapon in their possession. However, if it could be achieved, “it would have my vote”.