#LiNo16: A Retrospective
Back

It was great to receive tips from David Gross (discovery of asymptotic freedom, 2004) on being creative: be interested in more things outside physics; and dealing with frustration: work always with more than one problem at a time. Although not surprising, did you know who his favorite Nobel Laureate is? It’s Albert Einstein. I loved that Kurt Würthrich (developed NMR, 2002) used to practice high jump (there is a picture on Nature 520, 2015) and that Bill Phillip’s (laser cooling, 1997) secret to happy life is a positive attitude and finding balance in the different phases of your life. His description of a good day: “a good day is when I learn something new”.  One of the most shocking things I learned at the meeting was that we burn 50-75 of ATP daily, pretty rad, right? On a day-to-day level, we learned that a great way to organize workload is Eisenhower’s urgent and important principle.

“Scientists are the grown ups that remain as curious about the world as when they were children” – Carl E. Wieman (first BEC, 2001). 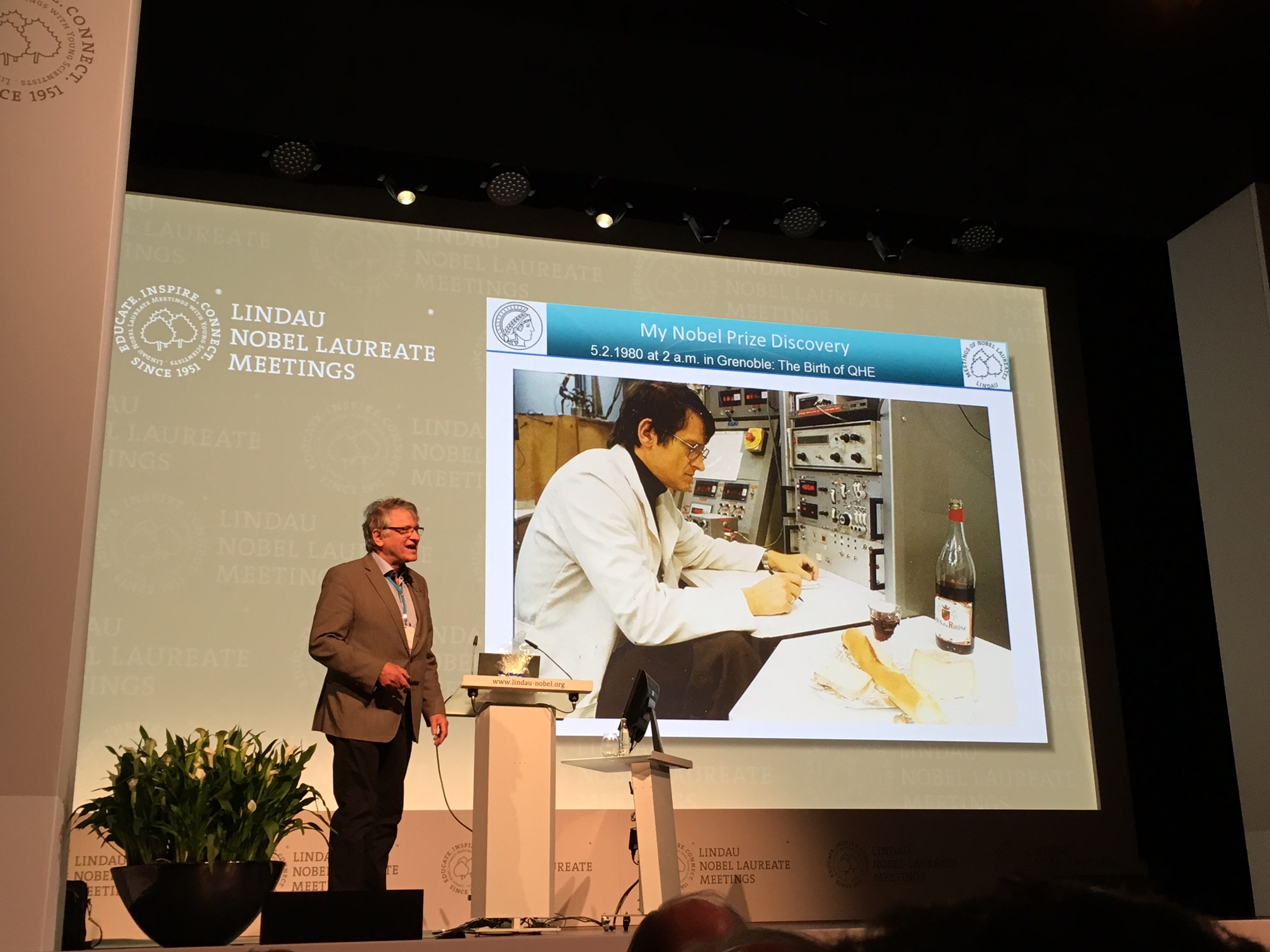 It was unique to see the more “human” side of such bright and inspiring scientists. Stefan W. Hell (developed super-resolved fluorescence microscopy, 2014) was motivated to break the diffraction limit and wanted to do something that would be useful for future generations; and Klaus von Klitzing’s (discovery of integer quantum Hall effect, 1985)  three things you need to get a Nobel prize are: to cross lake Constance, eat chocolate, and buy yourself a Nobel prize medal (which you could go touch if you asked him). And did you know that George F. Smoot (discovery of black body form and anisotropy of the cosmic microwave background radiation, 2006) appeared on the TV series the Big Bang Theory?

We discussed how the metrics (h-index, etc) in Science are needed and dangerous. Oh, and not to get frustrated if you are initiating a field: it is hard to publish in high-impact journals.

“If we knew what we were doing it wouldn’t be called research” – Brian P. Schmidt (evidence of accelerated expansion of the Universe, 2011).

One of the big tasks for science is to improve teaching and education in physics. I’ve been fortunate to see different teaching methods and in Spain we need to address many issues. Some books recommendations by Carl E. Wieman are “How learning works” and “How people learn”. In the last the discussion of the meeting there were 4 conclusions about improving education in science: to motivate and pay teachers well (primary and secondary levels), to promote science via the media (government back up),  to inspire leaders to start the change, and to develop a good mentoring system so the student can study at home and go back to the professor with questions.

“Every scientist should have a secret garden” – Martin Karplus (development of multi-scale models for complex chemical systems, 2013). 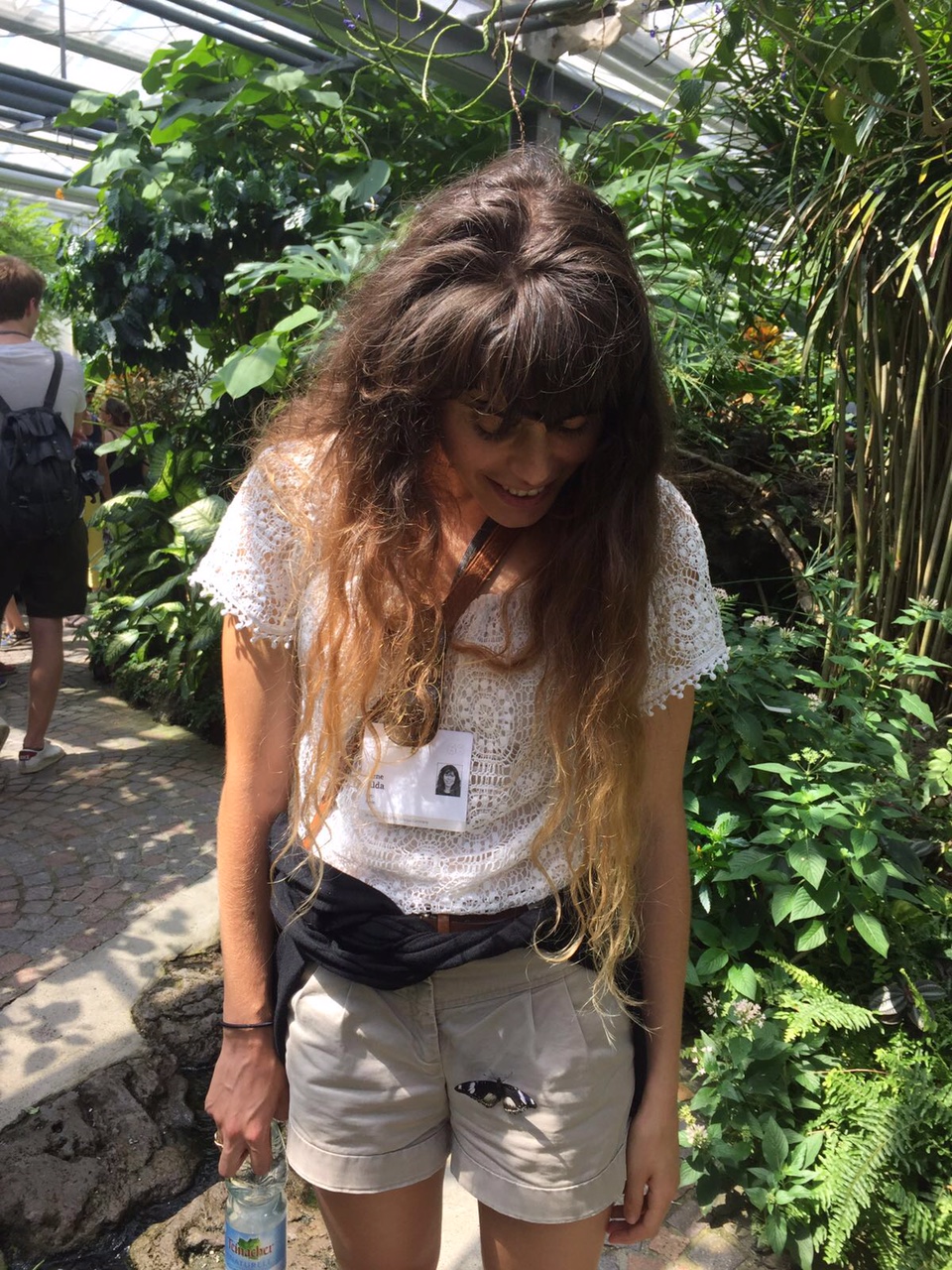 The social aspect was amazing. I got to meet so many different and unique minds. It’s outstanding and beautiful to be surrounded by such diversity. The peak moment for the week for me was on the trip back from Mainau island when we all danced “The Macarena” (I think that dancing is one of the best ways to let go).

Attending to this meeting has been a continuous exposure to be “wowed”.

Irene Alda, Lindau Alumna 2016, is a PhD student in the Plasmon nano-optics group at the Institute of Photonic Sciences (ICFO) in Barcelona, Spain and attended the 66th Lindau Nobel Laureate Meeting in 2016.